Baryski, Hanley Come Up Big in Win Over Wellesley 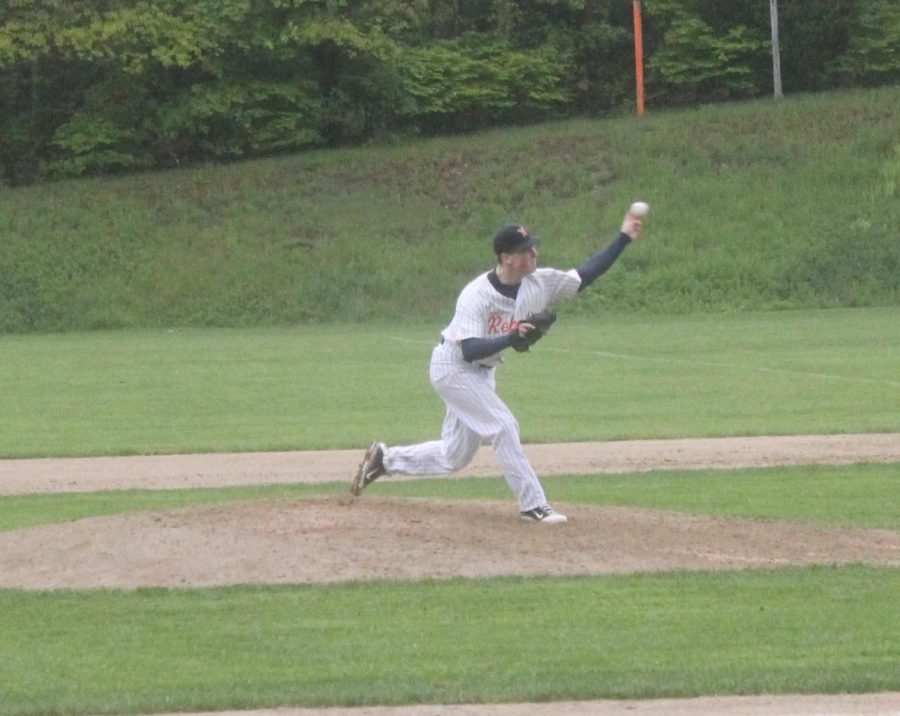 The 2011 Bay State Conference has been dominated by Coach Bill Tompkins’ Walpole Rebels Baseball Team.   A 2005 inductee into the Massachusetts Baseball Coaches Association Hall of Fame, Tompkins has proven to be the Bay State Conference’s premiere coach, holding the reigns of the Rebel program for over 30 years.  Following a difficult season in which the Rebels failed to reach the State Tournament for the first time in 20 years, Tompkins has led his more experienced squad to a 12-2 record and the ranking of 9 in the statewide polls.

Considered by many to be one of the major reasons behind Walpole’s drastic turnaround is the Rebel pitching staff.  Although senior Captain Tom Ryan remains the ace of this talented group, junior Mike Baryski made a name for himself during his sophomore campaign and has continued to build his resume this season.  Touting a 3-0 record and an impressive 2.02 ERA, Baryski got the nod from Tompkins in Monday’s match up with the second place Wellesley Raiders.  With a chance to clinch atleast a share of the Herget title, Baryski delivered as he allowed only two earned runs in seven innings of work against the Raiders, while tallying nine strikeouts.

Setting the tone in the first inning, Baryski struck out the side in dominant fashion.  Following a 1-2-3 inning for Wellesley’s starting pitcher, the umpires called for a 20 minute delay as rain poured down on Elderacher Field.  Showing some signs of rust after the delay, Baryski worked himself into a bit of a jam in the second inning after a throwing error and an infeld single.  With one out and runners on first and second, junior catcher Dan King fielded a sacrifice bunt and fired to senior Captain and first baseman Jimmy Adams for the second out of the inning as the runners advanced.  With runners on second and third, Baryski worked his way out of the jam by inducing a soft liner to junior second baseman Matt Lavanchy.

The Rebel offense came to life in the bottom of the second, exploding for three runs behind RBI doubles by Jimmy Adams and junior slugger Craig Hanley.  With a three run cushion, Baryski went back to business in the third inning despite a lead off walk.  After a swinging strike out, Dan King caught Wellesley’s lone base runner of the inning attempting to steal second.  The top of the third came to an end as Lavanchy cleanly fielded a slowly hit grounder to second.  Despite a lead off walk by sophomore left fielder Cam Hanley to start the bottom of the third, the Rebels squandered an opportunity as senior third baseman Steve King grounded into a double play after two unsuccessful bunt attempts.

Continuing to roll through Wellesley’s batting order, Baryski took care of business with  1-2-3 fourth inning.  Conversely, the Rebel offense continued its relentless attack in the fourth inning as speedy senior Captain Troy Salvatore led off with an infield single.  Following a single by Jimmy Adams, a Wellesley wild pitch allowed the Rebel runners to advance to second and third.  As sophomore Johnny Adams hit a screaming ground ball to short, it appeared that Rebel base running blunders may once again keep them off the scoreboard with Salvatore being caught up between third and home, being tagged after a lengthy run-down.  However, this would not be the case as Craig Hanley would deliver yet another clutch RBI hit, singling to centerfield to score Jimmy and Johnny Adams to put the Rebels ahead by a score of 5-0.

Now holding a commanding lead, Baryski once again overcame a lead off walk to hold the Raiders scoreless while picking up the fifth and sixth strikeouts of his outing.  Wellesley’s pitcher showed poise as the Rebel offense was silenced in the bottom half of the fifth inning.  In the top of the sixth, the Raider offense was finally able to put a dent in Baryski’s armor, driving in two runs after back to back singles to begin the inning, cutting the Rebel lead to 5-2.

This shift in momentum would prove short-livedas the Rebel offensive went back to work in the bottom of the sixth.  As control woes began to get to Wellesley’s starter, both Jimmy Adams and senior Sean Coyne reached base on consecutive walks, causing a pitching change.  The Raider reliever proved equally ineffective, walking Craig Hanley to load the bases.  Despite the bases being full, the Raider pitcher attempted a pick off to second base, wildly throwing the ball into center field, allowing Jimmy Adams to score from third base.  Following a Lavanchy sacrifice fly, Coyne scored from third on a costly balk, another unforced error by the Raider hurler.  Dan King would once again end the inning with a sharply hit grounder to second base with the score set at 7-2 in favor of Walpole.

Baryski’s dominance continued into the seventh inning, which would be the final of his outing.  Despite allowing yet another Raider to reach base via base on balls, Baryski once again buckled down, striking out two and showing the ability to field his position, charging a slowly hit ground ball and firing to first for the out.  In the bottom half of the seventh, a spectacular diving catch in right field would end the Rebel’s chances of adding another run to their total of seven.

Due to the long nature of the game, the head umpire made the decision to call the game after eight innings, leaving the Raiders at the plate for the last time.  At the start of the eighth inning, senior reliever John Cullen got the call from the bullpen to close out the eventual Rebel win.  Facing his first batter of the game, Cullen produced a high pop up behind the plate.  Showcasing his defensive prowess, Dan King chased down the skying pop up, stopped on a dime inches from the backstop and made a great play that would often go unnoticed.  Cullen would then work his way into a jam of his own, allowing a walk and hitting a batter.  With runners of first and second, Cullen induced an easy fly ball and a soft grounder back to the mound to end the Raider’s hopes of a miraculous comeback and to seal the thirteenth Rebel win of the season.

For those in attendance, the story of the game for the Rebels was clutch, two-out hitting and Baryski’s persistant effort on the mound.  Craig Hanley and Jimmy Adams combined to drive in five runs for the Rebels, with much of this damage coming with two outs.  Baryski’s performance on the mound was gutsy to say the least, seemingly working through a constant jam, he allowed only two runs while amassing a near season high nine strike outs.  Perhaps ever more impressive was Baryski’s ability to work through the difficult weather conditions.  After the game, Baryski commented on his effort, “The ball was wet for the entire game.  That made it really difficult to be in control.  A couple of times Shank (Dan King) had to come out to the mound and reassure me that I could get the outs.”  When asked if he regretted not being able to finish his outing Baryski said, “I would’ve liked to finish it off, but the rain delay and a high pitch count made the decision to pull me obvious for Coach Tompkins.”

The Rebels will look to build on their 11 game winning streak on Wednesday against Bay State cellar dwellers, the Framingham Flyers.  However, as they continue to climb the ladder of the state rankings, the Rebels will eventually focus their efforts towards bringing a state championship back to Walpole.