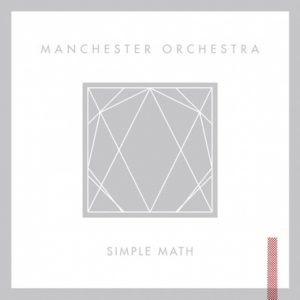 The American indie-rock band Manchester Orchestra, formed in 2005, recently released a new album titled Simple Math, one of three studio albums released since the formation of the band. Their last album, titled Mean Everything To Nothing, a hard one to beat, was deemed “one of the landmark releases of 2009” by Alternative Press reviewer Tim Karan. It ranges between slow, heart-wrenching personal narratives like “I Can Feel A Hot One,” to incredibly active, explosive songs like “Shake It Out,” each with an undeniable catchiness that immediately wins you over. With Simple Math anticipated to be even more emotional and hard-hitting, the angsty Atlanta, Georgia based band did not enitrely hit the mark.
The album begins with “Deer”; a somewhat eerie, ambient track with a light acoustic guitar in the backround. Its perhaps the most instantly likable track on the album, setting hopes high and raising interest in what’s on the rest of record. Following this is “Mighty,” with a tense, more aggressive mood compared to a song like “Deer,” with strings midway into the song complementing its aggressiveness. Within “Pensacola,” another instant favorite, the tempo is somewhat sporadic, going from fast to slow, and consisting of quieter stretches followed by explosive outbursts. The group chants add an appealing aspect, screaming the words: “Alcohol, dirty malls, Pensacola, Florida bars!” Hull remains true to character with his consistent theme of alcohol within the lyrics of his songs. The album holds a strong introduction, with individual songs delivering an instantaneous captivation.
By the fourth track, “April Fool,” the album does not maintain as much oomph. The last 7 tracks are easily forgotten; they’re missing a multitude of highlights drawing you to each individual song as the beginning tracks delivered. Although, “Virgin” seems to have a dramatically darker undertone seperated from the rest of the album, reminding you of something out of a horror movie with children’s muffled chanting and a building tension. The first single released off the album, unsurprisingly titled “Simple Math,” could be named the least enjoyable track on the album. Though none of the songs are completely and totally unlikable, the track “Simple Math” is merely mediocre and would not be expected as a first pick on one’s iPod playlist, along with some other tracks in the last half of the album.
The album has its dull moments, but conversely is also very smooth and flowing. String instruments can be detected coming through on songs like “Leave It Alone,” which has a strange nostalgia to it, reminding you of a song you’d hear off a Bright Eyes album with massed vocals starting and ending the track. Take away Hull’s conspicuous southern accent and you might ask yourself what Conor Oberst is doing on a Manchester Orchestra album.