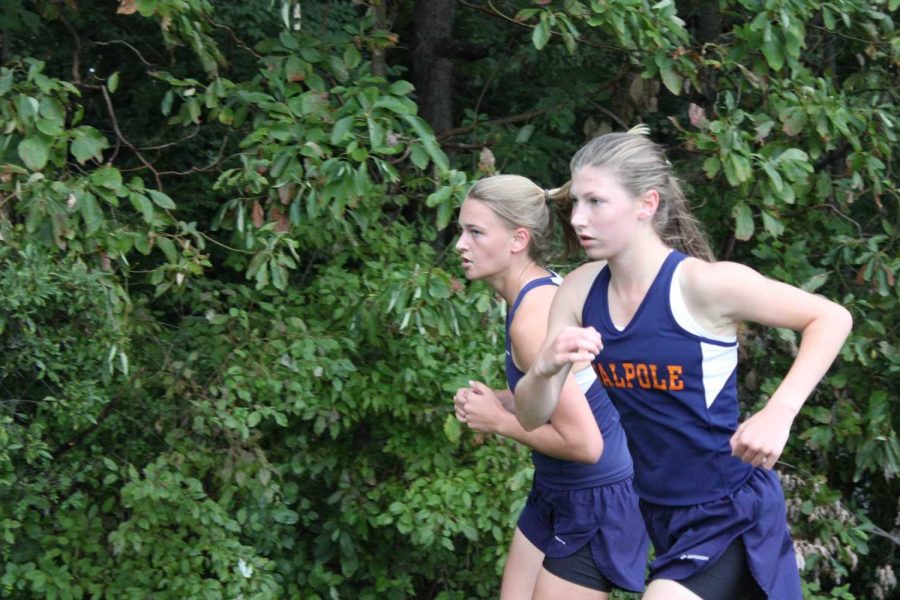 The girls cross country team had their second race, a tri-meet at one of the most challenging courses, Lars Anderson Park, against Brookline and Norwood last Tuesday. The girls defeated Norwood with a final score of 22-35, but Brookline proved themselves to be a harder opponent to beat with a final score of 43-18. By the half mile mark, junior Megan Peterson and sophomore Rachael Barry had a steady pack, but by the end of the race, there were large gaps between each varsity runner. At the one mile mark, sophomore Kristen Coyne pushed herself to run with the top 3 Brookline runners. The girls started the race looking strong but unfortunately suffered a tough loss by Brookline.

Barry placed fourth overall, first for Walpole, which is a huge improvement for her moving up from being the third top runner last week. She ran with Norwood’s number one runner for a majority of the race, who according to coach Jamie Farrell, “is an incredible runner.” Barry also managed to keep up with Brookline’s top three runners. Barry claims she could not have done it without the support of her team and plans on stepping it up to keep that number one spot on the team.
The captains prepared the girls for this challenging and hilly course by providing an inspirational quote. Senior Captain Paola Yerxa is not concerned starting off the season with a record of 1-2. She said, “The team knew we lost a lot of talented girls and our team has been practicing hard to prepare us all to step up and fill some of those empty shoes.” They have been focusing on regaining the depth they had last year.
According to coach Farrell, Barry and sophomore McKenzie Wilson had the strongest performances in the meet against Brookline and Norwood. Wilson placed 41 in the junior varsity race out of 93 boys and girls with a time of 11:53, close to beating Brookline’s course record of 11:47. She ran a good race with no teammates nearby to support her. Coach Farrell aims at “staying together with teammates” to win the next meet against Dedham and Wellesley.
Delete Image
Align Left
Align Center
Align Right
Align Left
Align Center
Delete Heading