Hanley Brothers Get It Done Against Norwood 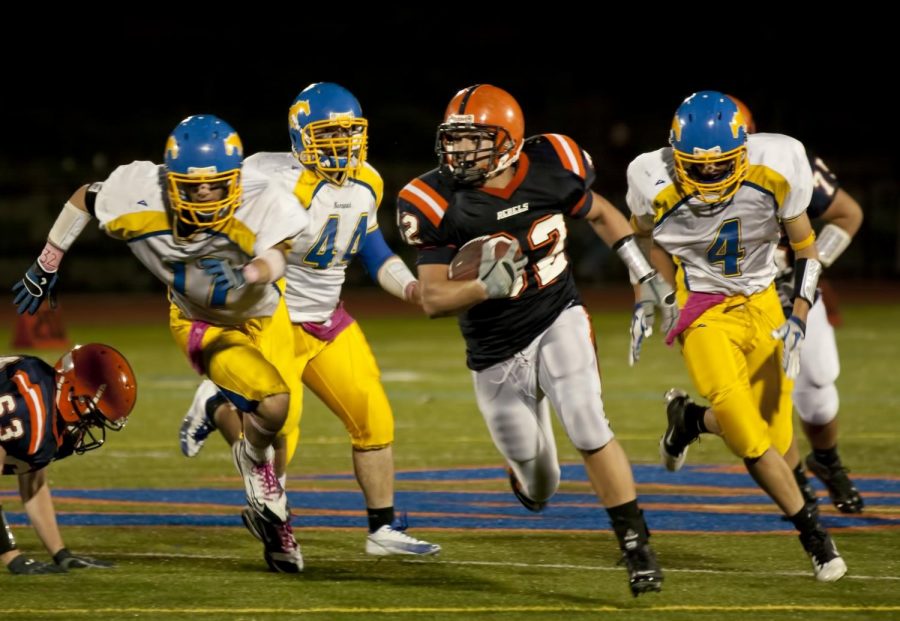 The Walpole running back evades Norwood defenders to get a first down. (Photo/Tim Hoffman)

Heralded as ‘the year’ that the Norwood Mustangs would finally defeat the Walpole Rebels, the Norwood vs. Walpole game on October 6 was expected to be a shootout.  Two powerful offenses lead by two senior quarterbacks – Tom Donnellan of Walpole and Tommy Munro of Norwood.  To the surprise of many, the annual backyard brawl between the two neighboring towns turned into a defensive struggle as the first points of the game were scored in the fourth quarter.  While the Rebels defense stalled the Norwood offense, the offense got going in the fourth and with the help of the Hanley brothers – senior Captain Craig and junior Cam – were able to beat Norwood.

In the first quarter it looked as if the offense of Norwood and the double-edged attack of Munro through the air and senior running back Andrew Alty on the ground were too much for the Walpole defense.  The Mustangs drove down the field almost effortlessly, until they were in field goal range.  Nearing the end zone, Norwood’s offense was halted by the Rebels defense – especially by defensive linemen and senior Captains Dan King and Dan Woods who both had a great game.  Walpole caught an early break as the field goal by Norwood missed the uprights.

At the beginning of the second quarter, a special teams error almost gave the Mustangs more points.  After a botched punt return by sophomore Colton Mitchell, the Mustangs recovered the ball with excellent field position.  Munro showcased his arm strength as he threw a bomb to a wide receiver that placed Norwood at Walpole’s 18 yard line.  Once again, Walpole’s defense came to life when it was crunch time and forced a turnover on downs.  Following a three-and-out by Walpole’s offense, Norwood tried to score a last-minute touchdown before halftime.  The Mustangs would have scored too, if it hadn’t been for the explosive closing speed of senior cornerback Dave Thibault who knocked down Munro’s pass at the last second.  With Thibault’s deflection, Norwood’s drive came to an abrupt halt.  Going into the half the score was tied at 0-0.

About halfway through the third quarter, it seemed like Walpole was ready to bust this game open.  A few minutes earlier, Craig Hanley returned a punt all the way to Norwood’s 26 yard line.  This return set up a Thibault run to within 10 yards of the end zone.  From the Norwood 6 yard line, Thibault ran on a sweep and had the end zone in his sights, until he met  the linebackers of Norwood.  Norwood hit Thibault so hard that he fumbled the ball at the 1 yard line and the Mustangs recovered in the end zone – giving them the ball at their own 20.  Norwood couldn’t capitalize on this lucky bounce because the defense of Walpole quickly forced a punt.

Walpole’s offense couldn’t be stifled forever though and in the fourth quarter the scoring began.  Through a power running game, Walpole drove to the 23 yard line of Norwood when, on a 4th and 1, Cam Hanley ran those 23 yards to put six points on the board for the Rebels.  Walpole missed the extra point, but still gained a 6-0 lead with 9:28 left in the game.  Norwood was desperate for any type of spark to jump-start their offense, so they attempted a fake punt with 7:30 left in the fourth quarter.  Coach David Cuzzi’s special teams knew this and easily stopped the futile attempt at trickery by Norwood.  With this stop, Walpole’s offense got the ball at Norwood’s 42 yard line.  Cam Hanley brushed off would-be tacklers and advanced the ball to the 6 yard line.  On the next play older brother Craig finished the drive off with a 6 yard touchdown run.  Junior PJ Hayes’s two-point conversion run gave the Rebels a 14-0 lead with less than 7 minutes left in the game.  The defense took over for the rest of the game as they put down any Norwood hope of a comeback.  As time expired, Walpole was once again victorious over Norwood with a 14-0 shutout of the Mustangs.

This Norwood game was crucial for the football team in developing for continued success further on in the season.  “All the work we put in during the off season really paid off,” said Craig Hanley, “it was a tight game but we wore them down in the fourth quarter.”  The game was arguably (besides a few minutes in the Framingham game) the first, real intense game of the year.  “We really showed that we can have heart,” King said after the game, “it was the first time all 11 guys on the field were not playing for themselves, but for Walpole.”  King saw this game as an important game because the intensity would prepare the team for later games in the season that will most certainly be four quarter games.  The Rebels look to improve to 6-0 on Saturday, October 15 when they travel to Wellesley to take on the 1-4 Raiders.