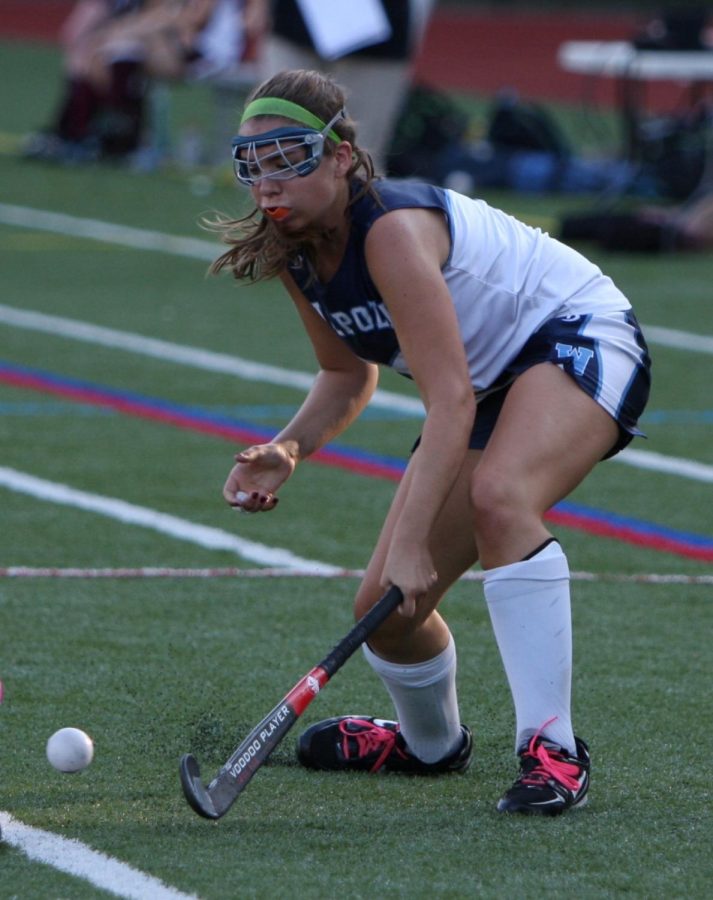 The Porker's forward receives a pass.

On a cool, brisk night, the undefeated Walpole Girls Field Hockey Team prepared for a game unlike their previous twelve this season.  For this one, it was not just the music blasting from the stands that amped up the intensity; rather, it was the familiar colors of the mustard-yellow and green uniforms of the Notre Dame Academy of Worcester that pumped up the powerhouse Porkers for their biggest test of the season.

Usually, the non-league game has always been held at Worcester State University. However, due to the new lights and new speaker system on Turco Field, the classic tradition was held on Walpole’s home turf this year on Sunday, October 16. Last year, the Porkers won 2-0 against the NDA Rebels. This year the Porkers turned it up a notch by winning 3-0 to stun Notre Dame once again.

The key to the Porkers’ success was their consistency out on the field. For the past 12 games their consistency has led them to an undefeated record, and this game was no different. With a clean assist by junior Michaela Tosone with five minutes left in the first half, senior Cailey Griffin scored the first goal.

Later, the Porkers’ leading scorer, sophmore Brooke Matherson, revved up the second half tempo with another goal, unassisted.  Throughout the whole game, Walpole moved the ball up field using “flat and thru” passes and effectively transfered the ball to the other side of the field to catch the other team off guard.  Notre Dame had no answer.

Towards the end of the second half, Griffin scored again with an assist from sophmore Ashley Waldron from the side. Although Griffin is not a starter, when she enters the game, she is a huge threat out on the field. Griffin said, “I was more than excited when I scored two goals especially because it was an important game. I was so pumped up before and after the game.”

The Porkers defense was solid throughout the game; no Notre Dame forward broke through without having a tough time. While no shots were fired on Kelley, the Notre Dame goalie had to be on her toes the whole time to the tenacious Porker forwards.  The goalie, senior Captain Katie Kelley said, “This game was our strongest defensive performance thus far.  Not only were there no shots, but the ball hardly entered the circle.”

Coach Marianne Murphy approved of the team’s effort as well.  She said, “Overall I thought the team played very well.”  She continued, “Communication was good and everyone played hard and with enthusiasm.”

Senior captain Meghan Murphy echoed her coach: “I have high hopes for us this year, and I think a crucial aspect to our success is our closeness as a team.  No other team can say that, and it shows out on the field.” Every year, the NDA game is a true test for the Porkers, so with this 3-0 victory, the team definitely appears to be at the head of the class.