Porkers Down Weston 2-0 on Senior Night 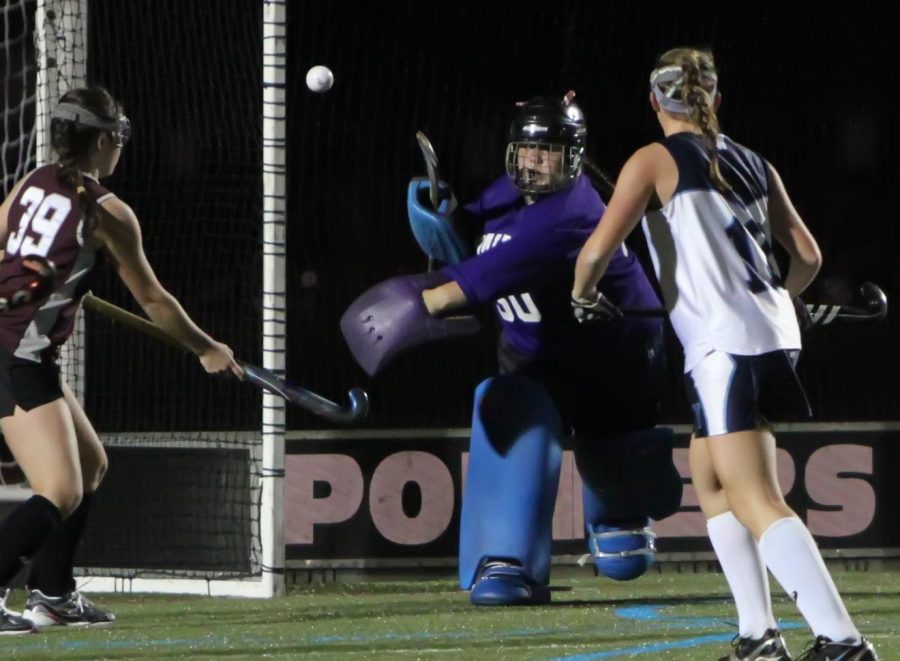 Weston, the Porkers’ biggest rival, has always been a tough game for Walpole, and this past Monday night, October 24, was no different.

Weston, with many seniors on the team, presented a huge challenge for Walpole.  No doubt it was a nail biter, but the Porkers offense and defense is unstoppable, and Weston came out of this game with another dissatisfying loss.  In years past, Walpole has usually won against them in regular season play – like last year when the Porkers won with a score of 3-0.  However, Walpole didn’t underestimate Weston, because in 2008 they beat Walpole in the Eastern Mass Final and went on to win states that year.

The Porkers senior night also made a huge impact on this game, with each senior’s name on a sign and the flowing pink streamers on the fence.  This was the last time the seniors played a night field hockey game on Turco Field.  Therefore, the Walpole team wanted to come out as stong as ever aginst Weston, especially for their seniors.

Since both teams were undefeated heading into the game that made the tensions that much higher – it took the game play to the next level.

The first half was intense as no side scored right away.  With five minutes left, senior Captain Meghan Murphy scored off the pads during a penalty corner.  Keeping up with the intensity junior Porker forward Michaela Tosone scored early in the second half.

Weston was not able to score, for the Porker’s defense and senior Captain and goalie Katie Kelley were able to stop all the shots in Walpole’s circle.  Kelley said, “Senior night amped up the adrenaline, but we truly came and played with our hearts.”

The Porkers moved the ball up field using transfers and  the midfield was able to get the ball up to the forwards to score. Head coach Marianne Murphy said, “ I thought as a team everyone played very well.  The spirit from the bench was awesome and all of [the Porkers] played  at a level that Jen [assistant coach] and I hoped for.”

The senior leadership of the co-captains is the key to a team effort, which the Porkers play with every time they step on the field.  “Meghan and Katie were leaders on the field,” said Murphy.  The Weston game was the biggest game of the regular season, and the win shows how well Walpole is doing this year.  Senior Captain Meghan Murphy said, “I think we played really well as a team tonight, and the outcome is a huge indication of where we match up with outer-league teams from the state.”  During playoffs the towns from northern and central mass are going to be tough competition, as Walpole has seen in past years.  The Bay State League is down this year, so a win against a strong team like Weston really shows the Porkers’ potential.

“We played with trust, composure, and heart, and we’re walking off the field with confidence for tournament”, said Murphy.  This is the attitude the Porkers will take into the playoffs this coming November.