Ganshirt and Connolly to Leave Footprint on Boys XC 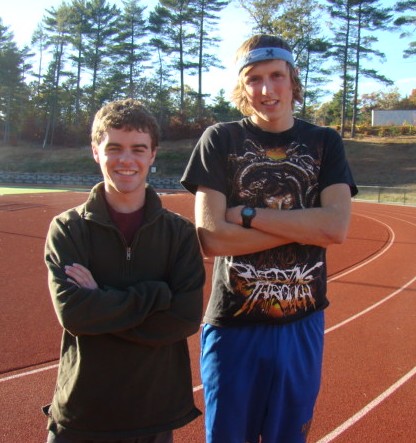 The two top runners of the cross country team pose for a picture.

Seniors Zach Ganshirt and Justin Connolly have gained a reputation among Walpole High as a rare but outstanding duo for the cross country and track teams. The two of them can be found at the front of nearly every race. Their performances are unwavering from week to week, no matter what. They have run through extreme weather, from scorching heat to sub zero blizzards — and still earned impressive times. They have run through injuries and still ran sub five minute miles without a complaint. Anyone could think that the two boys have been running since they could walk to attain such a high ability for running. Surprisingly, their innate talent was only discovered in their freshman year when they gave cross country a try on a whim. They were considering other activities, such as hockey, baseball, or the drama club instead of running all three seasons. But, by the end of their first cross country season, they were both top varsity runners — an impressive status as a freshman. As freshmen, Ganshirt and Connolly were destined to be key members of the team throughout high school.  Now as seniors, they lead arguably the most talented cross country team Walpole has seen since the days of Coach Jim Erker when he won State Titles over twenty years ago.  On November 12, Ganshirt and Connolly raced in the Franklin Park Invitational meet, one of the biggest races of their high school careers, and were the only two on Walpole’s cross country team to qualify for the All-State Championship on November 19. Ganshirt placed third and Connolly placed 12th out of 158 runners.

Recently, the boys also had a particularly successful race in the Brown Invitational meet at Goddard Memorial State Park in Warwick, RI. Ganshirt placed first in a 5k race with a time of 15:44.7, which means he was running roughly 5:15 minute miles in a race thats approximately 3 miles. This was a huge accomplishment on his part as he broke 16 minutes in a 5k, accompanied by an 18 second personal record. He was the only person in his race to run under 16 minutes. Connolly also performed just as well, coming in only 2 spots behind Ganshirt in third place in a race with over 180 other runners. Connolly ran a time of 16:08.7 and achieved a 22 second personal record as well.

The pair have been on the varsity cross country and track teams from freshman year to senior year, but their high level of performance was not achieved without consistent training. Both of them began summer training even before the football team had begun Gut Camp this past summer, and attended the Running School in New York for a week before cross country preseason began. The two of them are different in their training, though. They seem to have adapted to different levels of performance fit to their own bodies during practices. While both of them will accompany each other during long runs, Coach Tim Giblin, head coach of the cross country team, says that during workouts, ” Zach always blows it out at practice. Justin’s the opposite; we hold him back a little because he can really switch gears in races; there’s a little more precision involved. The common denominator is that they both look great on race day.”  Ganshirt has a more steady and stringent training technique that works for him, while Connolly is careful not to over do it in the anticipation of a race each week.

Though Connolly and Ganshirt run similar times, they are completely opposite people. Coach Giblin claims the boys are like the yin and yang. Ganshirt has a shy and introverted personality. His sister, sophomore Casey Ganshirt commented on her brother’s personality, “Zach is quiet, reserved and modest but when he runs he’s the most confident one out there. He’s someone I look up to for many things because he’s an extremely good kid and has a big heart. When it comes to running he’s always someone to go to. He gives you his honest opinion and gives great advice.” Ganshirt’s modesty can be somewhat astounding at times. For example, he claims he is never fully satisfied with his races despite even coming in first at the Brown Invitational against 182 other runners. Also, his coach said that the night after prom, he ran a 4:34 minute mile in a relay race and walked off the track putting a bag of ice on his hip that had been popping the whole race. No one else on the team complained about injuries for the rest of the season. When Ganshirt isn’t running, he can be found playing the drums, going to hardcore shows, longboarding, and mountain biking, just as any other kid would do.

Connolly on the other hand is a more extroverted and affable person. Upon meeting Connolly, there is an aura of energy and animation among him.  Giblin says that Connolly embodies the Flash from the Justice League. “He’s the one who keeps everyone grounded and laughing,” says Giblin, “He’s kind of a jokester, but when it comes time to race, he’s the only guy that can beat Superman. Justin brings that balance to the team.” His happy-go-lucky nature contrasts Ganshirt’s seriousness, bringing an equilibrium to the team. His teammates would say that he’s motivating on and off practice. Jon Kelland, a sophomore on the cross country team, says “Justin leads the team like a good captain, but off practice I always see him helping out around school participating in after school actitivities.” Besides running, Connolly enjoys doing school plays in the drama club, and manages them both together.

The two of them became friends and close teammates through cross country. They use each other to pace themselves and help one another run faster in races. During long runs, they keep each other company. The pair has formed a bond through their running and watched each other improve as they transitioned through high school. Ganshirt says, “During a race no matter how tired or worn out he is you can always count on him to run his heart out and finish in a place where we need him to.” There is a healthy competition between the two boys, and their friendship reflects that.

Giblin recognizes and appreciates the dedication they have to the sport and the sacrifices them and their families have made, whether it be hosting a team dinner for the team of 100 kids, or going all the way to New York to attend a race. Both Connolly and Ganshirt plan to run competitively in college, against many other runners similar to themselves. Both Connolly and Ganshirt would tell any athlete, “Keep at it! Once you set your sight on something, go for it. In order to improve you need to work for it.” The pair is a prime example of their own advice, and will continue to improve as college runners.