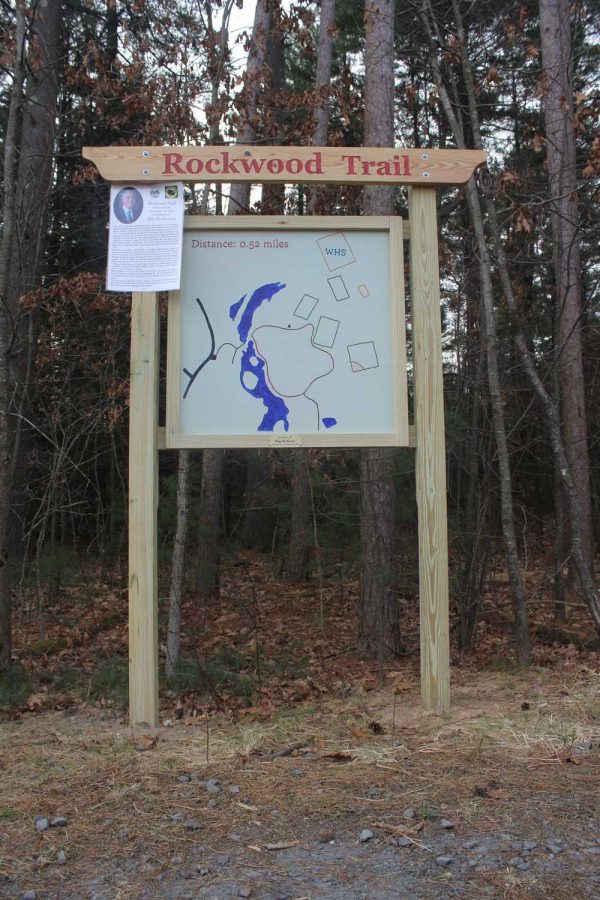 The Rockwood Trail stands tall in remembrance of Ray Rockwood.

On December 26, 2011, proud Walpole residents, the Rockwood’s, gathered the whole family and their closest friends in the town forest in commemoration of Mr. Ray Rockwood, whom to most attending was a grandfather they will never forget. The group gathered for the unveiling of a memorial “Rockwood Trail”, dedicated to the remembrance of Mr. Rockwood. Matt Zakreski, a grandson of Mr. Rockwood and a driving force behind the dedication of this memorial trail, said it was “a wonderful, amazing, bittersweet, and incredible day.”

Mr. Rockwood was a Walpole resident himself and attended Walpole High before the days of the Rebels, when we were known as the “Hilltoppers.” He often enjoyed taking walks through the Town Forest and bringing his children and grandchildren with him. Mr. Rockwood was a very involved Walpolian and enjoyed his small town; “he never wanted to stray far from his roots,” as his dedication speech states, located on the Rockwood Trail sign.

The day began at his wife, Mrs. Mary Rockwood’s, house, where only some were in on the surprise. The children of Mr. Rockwood were clueless as to what they were about to encounter. Outside of the Rockwood house, they began to celebrate his life by sharing some words about what he meant to the family. As Zakreski says, “there wasn’t a dry eye in the house.” The group finally gathered in front of the veiled memorial next to Turco Field where an opening speech was made by Zaskreski, and finally the memorial was uncovered, with which brought more tears among the family. Following this, the family and friends walked the entire .52 mile trail through the Walpole Town Forest.

To construct a landmark as such in the town, they had to contact Dick Adams, a member of the Town Forest Committee, to facilitate its formation. They discussed the design, location, and other aspects of the memorial trail and what would be best for what the family was looking for. Adams took care of all the technical permission issues for them, and they received great help from others as well. The wooden frame built with a painted map of the trail was assembled by Walpole High sophomore Walter Rose. Zakreski says, “It really makes you have so much joy in your heart to realize that there are so many good people out there who will literally move mountains for someone they barely knew because they knew it to be a good cause. It meant so much to me and my family.”

It was an emotional day for all attendees, and a proud sight to see it in fruition. But the project summoned bittersweet feelings. Zaskreski said, “making a memorial makes you very aware of the person that you’re missing, so it was hard sometimes to be so aware of the fact that he’s gone. I was very close to him as I’m the oldest grandkid on that side of the family.” All the grandkids, children, friends and other family, who thought it was a great idea for the dedication of the Rockwood Trail, of course felt some sorrow among the joy and honor that day.

The Rockwood family is very thankful for all the help they received in their efforts to create the Rockwood Trail. Junior Billy Rockwood states, “It was a great all around team effort and a really good way to remember a great man.” The memorial can be found at the entrance of the Town Forest directly next to the high school’s football field. The trail itself winds through trees and brings you to another exit until you emerge from the forest again. The family and the Town Forest Committee encourage all hikers to explore it.