From Best Day Ever, “Life in a Day” Prevails as Best Movie in a Long Time 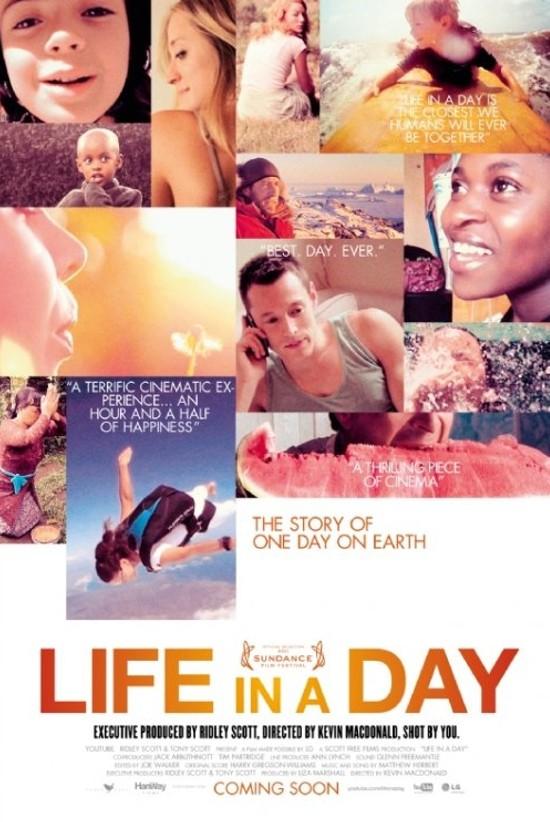 Created by YouTube, Life in a Day is a captivating documentary starring people from all corners of the world.

There were no actors, no multi-million dollar movie sets, no scripts to be memorized. No dressing rooms stocked with 15 varieties of carbonated water and crystal bowls filled with salted cashews. No forced emotions as a result of an over-enthusiastic director pleading for “movie-making gold.” In fact, there wasn’t a trace of the stereotypical Hollywood glam expected to be present in the making of a great film. Yet, Life in A Day—a documentary starring regular, just-your-average-Joes living their lives— can easily be considered the best film of the year.

A seemingly radical idea proposed by YouTube, Life in a Day is comprised of videos recorded on July 24, 2010 by people living around the world. Initially expecting around 10,000 hours of footage, the filmmakers were overwhelmed by the global interest in their humble project when they instead sifted through 80,000 hours of video from over 192 countries. Directed by Oscar-winner Kevin Macdonald and carried out by Scott Free Productions, the documentary incorporates thousands of personal stories deftly woven together, resulting in a work of art that procures an essence of innocent and unassuming beauty.

Submitters were asked three simple and somewhat unusual questions:  What’s your story? What’s in your pockets? What do you fear? Apart from this guideline, the partakers were free to interpret the task any way they pleased, and creativity was welcomed.

A shoe shine boy, around five or six years old, drags his supplies through the streets of Peru while trying to earn money to help support his family. A Korean man’s ambition drives him to continue his long-time goal of traveling around the world by bicycle. A Chicago family copes with the horrible reality of cancer. A young couple’s love stretches half a world away, where the husband is stationed in Afghanistan. The woman spends her morning preparing for their “date night”—a short conversation with her distant lover via Skype. Some stories are tearjerkers, exploring the strength and unyielding resilience of the human heart. Other videos focus on loss. However, all embody an inexplicable simplicity that is both akin to each other story, and, at the same time, completely unique. Whether it is evident through that happiness bursting from a child’s face when they play, the utter pride gleaming on the face of the pregnant woman surrounded by her giggling toddlers, or the shocked and incredulous expression of the woman being proposed to near a sparkling river, there is some deep-rooted emotion that sprouts from a common theme.  Maybe it’s that glimmer of hope found each story.

The film’s organization is unintentionally brilliant, starting with an “artsy” montage of the typical morning routine: wake up, yawn, brush teeth, make coffee, cook eggs, fry bacon, etc. As the day continues, clips are incorporated ever-so strategically to ensure the gradual change in time of day can be perceived.  First comes morning, then comes afternoon, and finally nighttime follows. Fascinating clips set in slow motion captivate the viewer, maintaining interest all throughout the 90 minutes. Although this film includes scenes from many countries around the world, a common misconception is that the documentary will emerge among those feel-good, nature promoting pieces of cinema like Disney’s Earth or Oceans that leave viewers hopelessly trying to jump on the ‘green’ bandwagon while shouting, “Save the rainforest! RECYCLE!” or switching every light bulb in the house to those that are energy-saving. Nope, don’t count on that happening: Disney can keep its fancy-footage-recorded-from-a-helicopter-over-majestic-mountains and depressed-polar-bear-sitting-on-a-lonely-ice-cap tactics, thank you very much. However, Life in a Day does include some awe-inspiring time-lapse videos of nature, mountains, and urban life in the city. Keeping its humble personality, this world-wide home video inspires and emphasizes the sheer beauty of life in a subtle way– and all in just one and a half hours.

As directors hoped, July 24, 2010 is sure to be a day that is preserved eternally.  The film, created with the intentions of being a time capsule film, will allow future viewers an in-depth view what life was like on this day in history. A glorious masterpiece, Life in a Day possesses a tremendous amount of soul, hope, love, despair, joy, and innocence all at once.  So forget those tired, worn-out comedies and sappy sci-fi romance movies with predictable endings (we all know she ends up leaving the warewolf and running back to her vampire, okay?). The real magic may not even be made in Hollywood. Like the thousands of little lanterns setting that July night aglow during the festival of lights at the end of Life in a Day, the best results don’t come from a green screen; instead, they are obtained through the experience of living life to its fullest. Raw emotions, like those captured in the documentary, cannot be recreated. They’re genuine. Now that’s “movie-making gold, baby.”

Posted on YouTube for free, the film is ‘coming soon to a computer screen near you.’