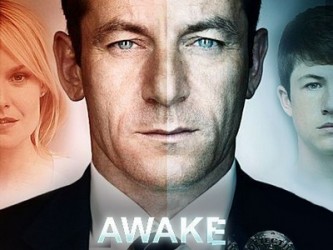 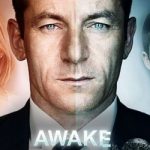 Everyone copes with loss in a different way.  On NBC’s “Awake”, Michael Britten manages his tragedy by subconsciously dividing his world into two separate parts.  In the aftermath of a tragic car accident, he awakens to find himself caught between two different realities: one in which his wife, Hannah, is alive and his son is killed; and one in which his son, Rex, survives the crash and his wife is dead.  He spends a day in one reality, goes to sleep, and wakes up in the other, leading to confusion as he assumes he is half dreaming and cannot decipher what is real from what is imagined.

The intriguing new series was originally set to premiere March 1st, but the pilot episode was released two weeks early as a preview.  The opening scene of the pilot is the car accident, where Michael wakes up and sees that his wife and son are dead.  “So tell me how this works,” the audience hears Michael’s therapist, Dr. John Lee, ask.  He replies, “I don’t know.  I close my eyes, I open them, same as you.”  He precedes to recount his return to work – who his new partner is, the case he is working on, and how his wife is dealing with his son’s death.  He wears a red rubber band around his wrist, his wife’s favorite color.  At the end of that day, he goes to bed and wakes up to a new day where his son is alive.  Here, he has a different partner and a different case.  His son copes with Hannah’s death by playing tennis, something she used to love to do.  He wears a green rubber band around his wrist, Rex’s favorite color.  He explains this all to a different therapist, Dr. Judith Evans.

Both therapists try to prove to Michael what is real, but things get interesting as the worlds begin to overlap in some ways.  The two crimes that Detective Michael Britten is investigating are connected to each other in obvious ways – the criminals both have red hair and both the crimes take place at 611 Waverly, whether it is the number of a parking spot or a street number.  This adds a lot of mystery to the show as viewers will try to figure out what is real and what Michael is dreaming about.

Overall, the pilot is a great start for the show.  Jason Isaacs, who plays protagonist Michael Britten, is a solid actor and makes the situation very believable.  There are a lot of twists and turns as well as action involved in the plot.  The pilot will leave viewers asking questions, many of which will hopefully be answered in the first season of the show. “Awake” definitely will not disappoint.