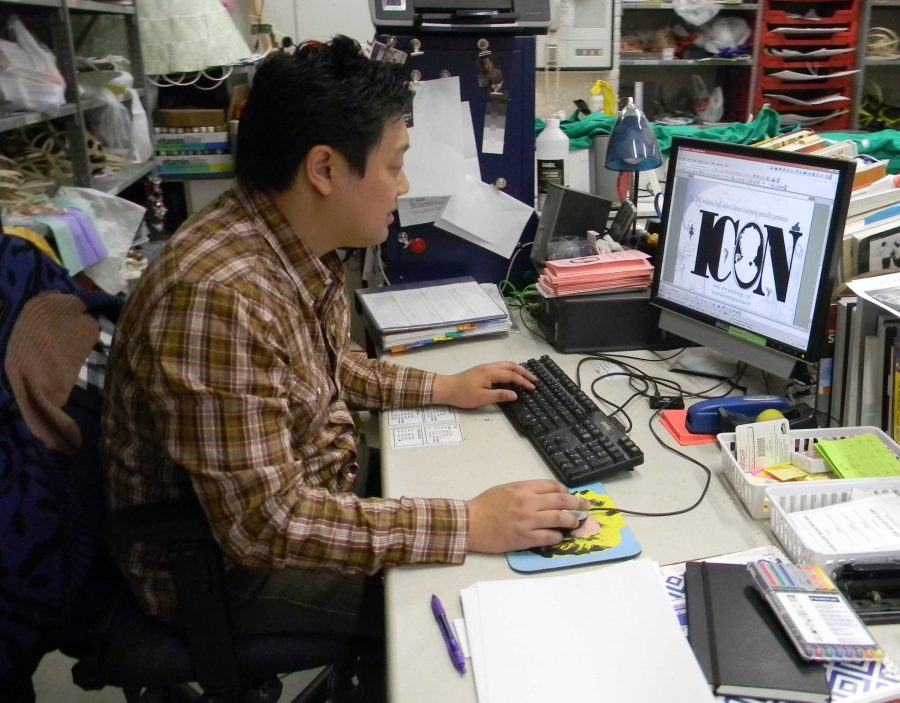 Mr. Kim edits a poster for the Dance Company show.

Out of all the programs that Walpole High School has to offer, the Dance Company is definitely one of the most unique. Most high schools have similar sports programs and drama clubs to each other, but not every school has a group of thirty two girls who meet in the health room two to three times a week, clad in leotards, tights, and leggings. You can often spot a Dance Company member out in the hallway on a Tuesday afternoon, creating her own choreography and scribbling it down on a piece of paper. Come March, the girls take over the auditorium to paint and build a variety of sets, ranging from sky-high trees made of foam board to ship masts created from cardboard tubes. Anyone who has seen one of the annual March shows knows that the girls deliver a well-thought-out performance that one would not typically expect, and this is all thanks to the artistic director and creator of the company – Richard Kim.

Kim, once a dancer himself, had always planned on starting a dance company at whatever school he taught at. It was specifically a great program for Walpole however, due to all of the local dance schools in town, including Walpole Dance Center and Commonwealth Dance Academy. When he was in college, he was originally studying dance, but after freshman year he dropped out of the course because he did not feel that it was the right direction for him to be heading.  Not knowing where to go from there, he decided to enroll in art and found that he loved the subject.

Being an art teacher, Kim’s knowledge of the subject makes an impact on how the show turns out. He said, “Art is about constructing and controlling space. Deciding where to put dancers on the stage is like putting paint on a canvas.” Kim’s creativity certainly factors into the dance company show, not only through the appearance of the dancers on the stage but the actual concepts of the dances as well. The shows have featured a broad range of music and themes, from a ‘60s theme with hippies storming the stage to a tribute to Charlie Chaplin. Kim said, “It takes a ton of research. It’s not just out of the blue.” With the help of iTunes and Youtube, he finds songs that he likes and comes up with the concept as he goes along.

He certainly has a far-reaching taste in music, as this year’s show “ICON” featured a dance that solely included classical music, “Fate of Juliet,” which turned out to be Kim’s favorite dance in the show. Kim said, “I was most nervous about Juliet and not sure that I liked it.” Friends had told him that they did not think he could include a dance in the show that included classical music and no voiceovers. Fortunately, the audience seemed to really like the dance and it was one of the favorites this year. It was a big change from the usual style of the shows, which is a lot more out there.  “ICON” included dances that were represented by famous people throughout history, such as Eleanor Roosevelt, so the concept of each dance was clearer to the audience than in previous years where the meaning could be hard to decipher.

Four year Dance Company member Casey Ricci said one of the most peculiar dances ever was Hydrogen Juke Box in the 2009 show Groundbreaker. “Everyone wore those glasses with the nose and mustache attached to them. I think that alone made it the craziest.” Compared to previous performances, “ICON” was not as mad as previous shows, with the exception of the Pie Eating Contest. “The concept was so original and the performance was over-the-top,” said Ricci. The show as a whole was very unique, as each dance had a symbolic “icon”. Each dance was performed in a different way, so they were all very distinct from one another.

Of course, even if all the girls had remembered all of their dance steps, they would not have performed so well without Kim, as he always emphasizes how important it is to perform the dances to the audience. Ricci said, “I love that Mr. Kim is so passionate about the company. He would never let anyone sell themselves short or do anything less than their best.” Kim encourages the girls to always dance their best no matter who is watching, even in the middle of a crazy situation. Ricci recalled one instance where the fire alarm went off and the group had to be evacuated from the health room. “We ended up doing stretches on the tennis courts in front of everyone. At the time I think everyone was humiliated because we were all in leotards, but now we can all laugh about it.” Experiences like this are what bring the girls together, which is why Kim describes Dance Co as being a sisterhood: if the group did not work together so well, they would not have such a successful show every year. He said, “I don’t think the audience knew how difficult a show it was to pull off. They did really well.” As for next year’s show, Kim has already begun planning. “I don’t really know what the show will be like next year. Definitely really bizarre,” he said.  As far as future performances go, fans of the Dance Company should be prepared to expect the unexpected.