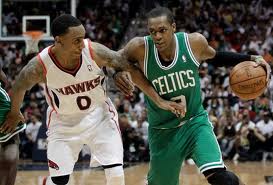 Rondo looks to carry the Celtics into the second round.

The Celtics lit up the Hawks in the fourth game of their series, winning 101-79.  This game was all Celtics from the get-go.  They broke out of their offensive slump behind 24 points from Paul Pierce in Game 4 of the Eastern Conference first round series. The victory gives the Celts’ a commanding 3-1 series lead over Atlanta in the best-of-seven affair.

Rajon Rondo (20 points, 16 assists) put on a show the Garden crowd, setting the tone for the Celtics’ offense that put up 90 points over the first three quarters. The offensive burst helped the Celtics to lead by as many as 37 points in the second half, spoiling the returns of the Hawks’ Josh Smith (15 points, 13 rebounds) and Al Horford (12 points, five rebounds) to the Atlanta lineup. After shooting just 40.6 percent from the field over the first three games of the series, Boston hit 63.6 percent of their shots in the first half, enabling them to build a 24-point lead, helping them to cruise to the easy win.

The Celtics look to close out their series with the Hawks Tuesday night in Atlanta.