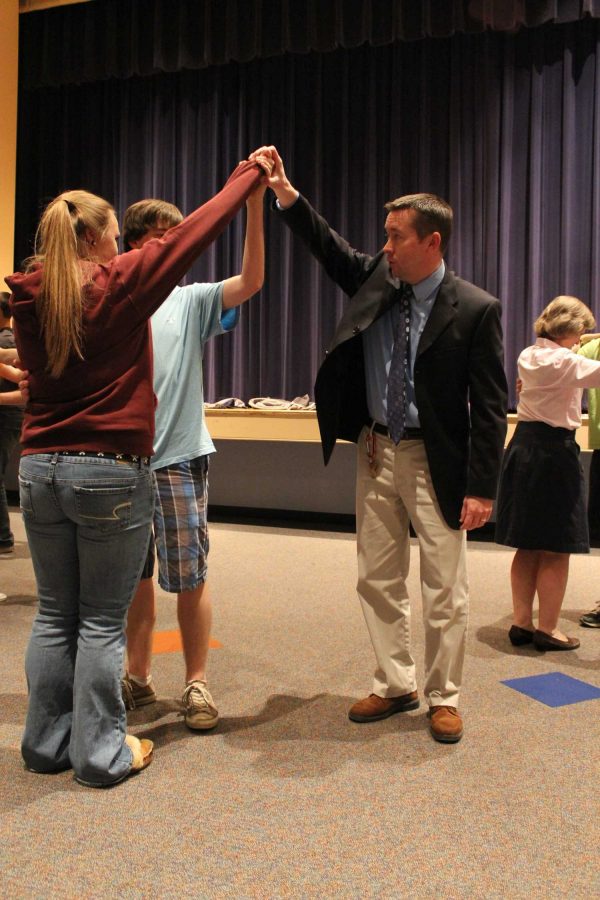 Mr. Connor teaches two Prom-goers how to pull off a spin.

Prom season, as everyone knows, is a prevalent reminder of a few things for the school systems. Number one, above all else, adults take precaution against possible underage drinking that occurs before, during, or after the prom. Although they know they cannot completely prevent it, they try to mediate possible damage by informing kids of the dangers of binge-drinking. However, according to Assistant Principal Mr. Edward Connor, we should also worry about the dance moves of the students, who are in need of some serious improvement. Kids were in for a culture shock with his offer.

Mr. Connor held a Fox Trot and Waltzing dance class last week in order to teach kids alternative ways to dance this upcoming prom. A lighthearted get-together of about 10 kids followed his instruction, and quickly caught on to the simple four-step Waltz. After kids had clearly caught on, he moved on to the Fox Trot. Mr. Connor accompanied the dancing with classic instrumentals fit to Waltz to, but eventually switched to common songs played at prom, which made the style of dancing seem not-so-bad and highly adaptable.

As for the students’ modern style of dancing, Mr. Connor says, “Oh, I know I can’t stop it.” His approach was most likely an attempt to gets kids in the spirit of prom and have a fun ability to show off during the actual celebration, if they choose to do it. A majority of the people who attended were paired with their dates, so students attending prom should be on the lookout for a few Waltzers.

But for the more crucial matter, underage drinking, the school held a meeting for the parents of children attending prom. They had the Assistant District Attorney of Norfolk County and the Police Chief for the Walpole Police Department speak to the parents and let them know kids will be looked after and kept safe on the night of the big event. The Assistant DA, usually dealing with vehicular homicides, sexual assaults, or other acts of violence, notices that underage drinking is often linked with the cases she prosecutes. She said, “I always see a look of shock in my defendant’s face when they realize what’s occurred and wish that they could take it back.” She wants attendees of the prom not to have to experience that shock and understand that mixing drugs and alcohol for the first time can still have consequences regardless of it being the first time.

She described the act of drinking and driving by saying, “Sometimes kids think; You drink and drive one time, and you veer near the yellow lines. You drink and drive twice and you cross the yellow lines. You drink and drive a third time and your on the left side of the road. It doesn’t work that way. Drinking and driving has consequences the first time.” She also touched on the subject of what is called “Social Host Liability”. This law states that liability is on the social hosts as a result of serving alcohol to minors. In other words, parents who allow drinking parties risk liability for any deaths, injuries, or other mishaps because of the underage drinking that took place in their home.

The Police Chief of Walpole also spoke to the parents, saying that underage drinking is a community problem. He said, “It’s not about locking kids up. It’s about keeping them safe. Kids need a consequence, not a record.” The Police Department wants underage drinkers to understand the mistake of their actions, without ruining the rest of their lives.

Also, instead of the usual crashed car set up in the front of the school each year around prom season, in coordination with the Walpole Police Department, the school set up a simulation of two totaled cars with students actors playing injured or deceased victims, the drunk driver, and friends and family effected by it. They had the Walpole police department, fire department, and collision respond team come and do an official routine of how they would respond to an actual accident of this degree. Find out more details at www.slffirm.com/woolsey-fire/. The intention for this crash simulation was to bring awareness to the dangers of drinking and driving. To have the best night possible, the school and the community hope to see that no kids get into danger or get behind the wheel of a car after drinking.