“Stand Your Ground” Laws Should Be Eradicated 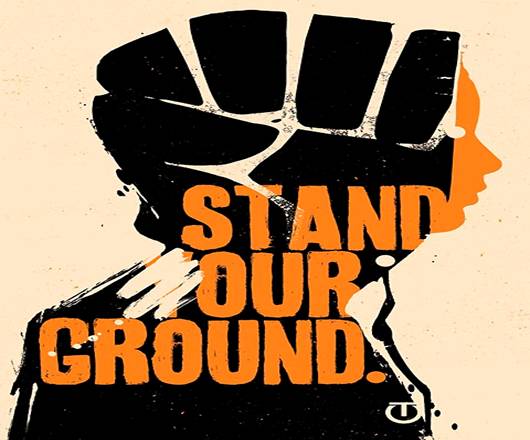 "Stand Your Ground" laws are legal in 24 U.S States.

On February 26, 2012, in Sanford, Florida, a teenager named Trayvon Martin was walking home, and was spotted by self-appionted neighborhood watch volunteer George Zimmerman.   Zimmerman, an active community member, felt that Trayvon looked suspicious, so he called the Sanford Police Department. During the call, the police told Zimmerman that he should not pursue Trayvon, reiterating that a neighborhood watch member is not equivalent to a police officer. Yet, for some reason, Zimmerman decided to follow and pursue Martin. The ramifications and consequences that followed were devastating.

The rippling effect of Trayvon’s death has this nation roaring and eager to discover the truth. Many claim that Zimmerman had no business carrying a gun on him; since the Sanford police discourage community watch members from carrying weapons, although they have the constitutional right to do so if they are a licensed gun-owner.   The counterargument claims that Trayvon was the one who instigated the whole situation and that Zimmerman was only acting in self-defense.  The evidence to support this statement, however, is somewhat scattered and uncertain, since Zimmerman initially followed trayvon.

Despite these arguments, Florida’s “Stand your ground” law is one of the reasons this case has so many missing puzzle pieces. The law itself is long and drawn out, but three main points can be analyzed and questioned.  These interesting points from the law explicably state that:

He or she reasonably believes that such force is necessary to prevent imminent death or great bodily harm to himself or herself or another or to prevent the imminent commission of a forcible felony.

2. A person who uses force properly and as permitted is justified in using such force and is immune from criminal prosecution and civil action for the use of such force.

Ridiculously enough, a person is also justified in using deadly force if:

3. In good faith, the person withdraws from physical contact with the assailant and indicates clearly to the assailant that he or she desires to withdraw and terminate the use of force, but the assailant continues.

First off, the law is extremely vague, and is open for a wide amount of interpretation.  What is “reasonable belief”?  What is “necessary conduct”?  How possible is it that on a person to person basis what a certain person believes to be necessary and reasonable another person might believe is not necessary and reasonable?  The law is simply nonspecific and overly subjective.  Aren’t we supposed to have objective laws?

Secondly, the immunity from “criminal prosecution and civil action” is, again, vague. What is force that is “proper and permitted” as the law states? Is that only self-defense? Is that in a situation where you “feel” like your life is in danger? Do you need to be attacked first or can you initiate the force if you have “proper” reason to believe you’re in “danger”?

Furthermore, a person can use deadly force if they withdraw from the scuffle and miraculously say “let’s not kill each other” but the other person just keeps hacking away at him/her.  Now, realistically, if your in a deadly fight with someone, you are not going to just withdraw and say ‘Let’s stop fighting”!  That’s probably why this part of the law starts off with the words “in good faith”… Anyway, the law should be interpreted by real professionals and if there is a necessity to involve a criminal defense attorney, hire a Tampa criminal lawyer like Mike G Law.

But in all seriousness, George Zimmerman was essentially free to go home after he killed Trayvon Martin, because of the immunity from “criminal prosecution”. Along with that, no investigation was conducted on the Trayvon Martin case until March 20, 2012, almost a month after the shooting took place. If someone shot your best friend, or your brother, or your sister, or your daughter, or your son, how would you feel if it took one month for someone to even investigate the incident?

Eventually, the state of Florida did open its own investigation and took Zimmerman into custody on April 11, 2012. On that same day, Florida Courts finally had announced and charged George Zimmerman with second-degree murder, which holds a minimum sentence of 25 years and a maximum sentence of life-imprisonment.

No matter what you think, the problems with this law are very evident. Legal in 24 states, or nearly half this country, the law is meant to create equal protection because one can use force in a “life-threatening” situation. Obviously, what the Trayvon Martin incident proves is that this law actually does the opposite, by encouraging vigilante justice and not giving equal terms to the victim’s family. In a case as serious as this, a full scale trial is absolutely necessary. Just because Zimmerman is a community watch-volunteer doesn’t mean he is innocent or is entitled to special treatment.

We are supposed to live in a country that is fair, and treats everyone with equality. The “Stand Your Ground” law deliberately contradicts this American belief. For this reason, and so many others, it would be a great justice to this country if this law is either seriously reformed or completely removed altogether. It is the least this country can do to families who have faced similar struggles such as the Martin’s.