Porkers Looking Towards Another “Re-loaded” Season 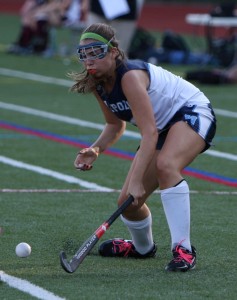 a Porkers forward recieves a pass from a nearby teammate.

After a sudden end to the Porker’s season last November, the Duxbury field hockey team upset the Walpole Field Hockey Team in the South final.  A few months have passed, and the Porkers are beginning to look towards the upcoming 2012 season.  As head coach Marianne Murphy calls it, “the year of change.” “I took a look at how I have been coaching the last couple of years and asked myself if there is something I could do to help my players get over the hump, get beyond the North/South game and make it to the State Finals again.  I was so intense my first few years of coaching and pushed my players hard to excel and pursue excellence!  I think I have changed a little in that respect.” says Coach Murphy.

Since 2007, the North has obtained the State Championship title, and the South teams have had a 5 year lull since the last state championship in 2006. But this year’s main goal is to make it to the EMass final and beat the Northern team that gets there.  Over the last two years, Andover has won that game, and gone on to win the States; however, Andover is on the list for teams that the Porkers will play this year as a regular season game.  It will be the most challenging game of the regular season, a true test as to how the Porkers can match up against some of the toughest elite teams from the North.  Other games that will be challenging will be Weston and Notre Dame Academy of Worcester. Murphy says, “I am very excited to be playing a team like Andover because they have some very good players and will make us work hard.”  It is games like these that will prepare the field hockey team for more competitive tournament games.

During the offseason, team players participated in various tournaments put on by colleges around the area, including Bryant, Providence College, and Boston College.  Many players on the team play club field hockey, and during the summer the team conditions every week.  Working hard in the offseason will greatly impact the level of play that Walpole brings to the field. This year’s senior captains are Michaela Tosone, center forward; and Holly Norberg, a defensive anchor as sweeper.  Both captains are prepared to step up to fill the void left by the 2011 captains: Meghan Murphy and Katie Kelley.  Tosone said, “I was able to learn a lot from Meghan and Katie.  Hopefully, we can use their guidance and all they’ve taught us, and be successful.” This season three senior starters have graduated; therefore, some new players will have to step up and fill their spots–which include center midfield, right back, and goalie.  Holly Norberg said, “Im excited and nervous at the same time.  I always look forward to field hockey season because it is always one of success and excitement.  We lost some key players in our line up as well as on the team, but I am confident that people will be able to step up and fill their role.”

The Walpole Porkers look forward to another season of success.  Norberg said, “Our close team is what sets us apart, and I hope that Michaela and I, as captains, will be able to create the same bond that last years captains did, because that is one of the parts to our success.”