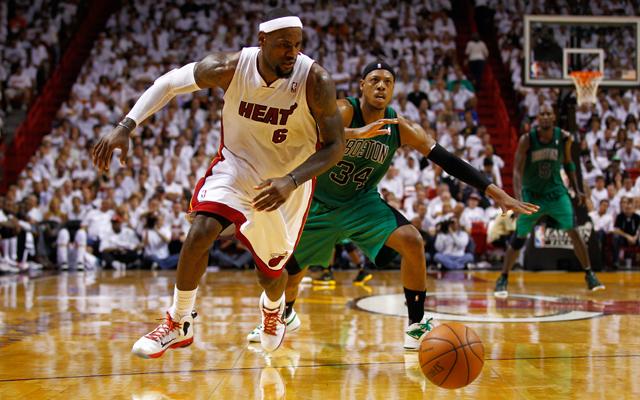 The Celtics have showed no signs of age in this series, a factor many thought would ultimately due them in.

The Boston Celtics defeated the Miami Heat 94-90 Tuesday in Game 5 of the Eastern Conference Finals at AmericanAirlines Arena, giving the Celtics a 3-2 lead in the best-of-seven series.

Forward Kevin Garnett led Boston with 26 points, including two free throws to seal it in the closing seconds. It was arguably Garnett’s best performance of this postseason. He was effective in the paint and on the perimeter. Garnett also had 11 rebounds and altered some shots in the lane. Forward Paul Pierce added 19 points, with none of them bigger than a 3-pointer to put the Celtics ahead with 52 seconds remaining. The Heat, which led most of the opening three quarters, was led by LeBron James’ and his 30 points. Shooting guard Dwyane Wade had 27 points, but no other Heat player finished in double-figures. The Celtics had trailed throughout until a short spurt just before the end of the third quarter. They led by five entering the final quarter, giving them just enough confidence to steal a win in Miami.

Forward Chris Bosh returned after missing the last nine playoff games because of a strained abdominal muscle. He played just 12 minutes, scoring nine points and grabbing seven rebounds. Bosh did not play in the fourth quarter when the game was on the line.

A key to the Boston victory was the defensive work they put in. The Celtics held the Heat to 39 percent shooting, including 7 of 26 from the 3-point line. James and Wade combined to shoot 21-for-47 from the field. While they came up with several big shots, many of their attempts were contested or did not come in the flow of the offense. Also, Rajon Rondo, despite his shooting struggles, continued his role as a facilitator. His shot just 3-for-15 from the field, but had a game-high 13 assists.

Game six is Thursday at TD Garden in Boston. Miami has their backs against the wall in this one, so getting the win, even on home court, will be difficult for the Boston Celtics.