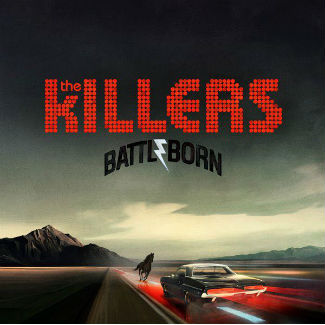 Battle Born, Released on Sptember 17, 2012 is Sure to Put The Killers Back in the Spotlight.

Mary McAvoy
Based on the career of Las Vegas rock band The Killers, it seems like they will always be known for their hit “Mr. Brightside.” The song hailed from their first album, Hot Fuss, and hit the top ten on charts in both the US and the UK. Since their first success, the band has released a multitude of memorable songs, but the albums themselves are inferior to their debut. Sam’s Town, the band’s second album, features the standout singles “When You Were Young,” and “Read My Mind,” but only has a few other decent songs, such as “Bones.” The third album entitled Day & Age is perhaps the band’s weakest attempt. The single “Human” was an instant chart topper, and although the album appealed to the masses for the most part, it was “too pop,” according to many critics. Other than “Spaceman” and “A Dustland Fairytale,” the remaining songs are forgettable.

In the four years that followed the 2008 release of Day & Age, the band released an album of B-sides and rarities entitled Sawdust, and lead singer Brandon Flowers embarked on a solo career with his debut album Flamingo in 2010. After a long break, the Killers have returned with their 2012 release, Battle Born. Track one, “Flesh and Bone,” is a strong opener with pulsating beats that lead up to the chorus where Flowers’ edgy vocals shine. Track two and featured single, “Runaways,” is the epitome of a good indie rock song, as there is a slow buildup in the first verse, a roaring symphony of guitars at the chorus, a more upbeat pick up at the second verse, and an amazing bridge to finish it off. “The Way It Was” is a classic love ballad. Flowers’ nostalgically sings, “Maybe a thief stole your heart, or maybe we just drifted apart.” Soft backup vocals accompany the strong chorus. “Here With Me,” the fourth track, is another love ballad with piano and soft synths carrying the verses. Heavy bass opens tracks five and six, “A Matter of Time” and “Deadlines and Commitments,” but the former of the two features an explosive chorus while the chorus of song six includes techno beats. Track seven, “Miss Atomic Bomb,” is a clear standout comparable to the Killers’ well known song “Read My Mind,” as it picks up after the chorus. Flowers’ triumphantly sings, “And for a second there we’d won, yeah we were innocent and young.” “The Rising Tide,” track eight, sparkles with techno beats and sky-high vocals. “From Here On Out,” track ten, combines electric synths with acoustic guitar and hand claps for an entirely original and memorable sound. The band slows things down with “Heart of a Girl” and “Be Still.” “Heart of a Girl” opens with muffled beats and speeds up after the chorus, unveiling a slightly folk-like sound. “Be Still” starts as a slow piano ballad, but transitions after the chorus into an incessant, pounding beat. Namesake of the album “Battle Born” is a solid closer track with an electric opening and an unforgettable chorus: “When they knock you down, you’re gonna get back on your feet.”

If the Killers were “knocked down” before, they have definitely brought themselves back up with Battle Born. The album has headlining singles that stand out above the rest, but it also has something a few of their previous works have been lacking: versatility and strength throughout all of the tracks.  Though the songs are slower than usual, they are closer to the style of Hot Fuss without being a repeat of it.  Battle Born is a strong release because it combines something old with something new.  The album should put the Killers back in the limelight of alternative rock.