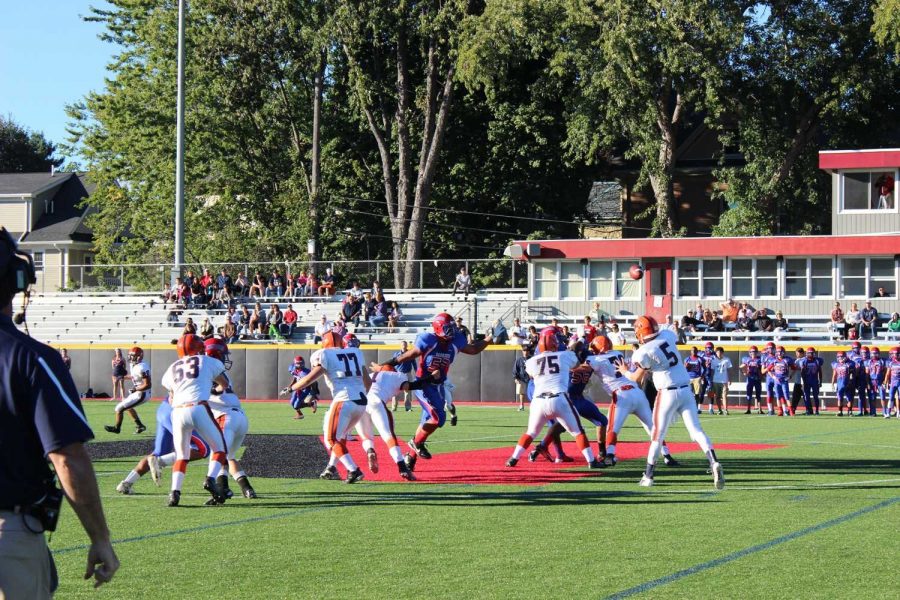 Football: The Rebels played Brookline last Sunday, blowing them out of the water finishing with a score of  48-13. Senior running back and Captain Mike Rando played exceptionally well finishing with 120 rushing yards and a rushing touchdown on just three carries as well as 80 receiving yards on four receptions.

Boys Soccer: Down 1-0 with 12 minutes to go, junior Striker Maurice Young scored two late goals to put Walpole ahead 2-1 against Milton on Wednesday night, with just two minutes left in play. Junior goalkeeper Pete Hoegler came up clutch making three incredible saves to keep the boys in the lead. They would go on to beat Dedham 5-0 on Friday and Norwood 1-0 on Monday.

Girls Soccer: The Girl’s Soccer Team had a disappointing performance against Milton last Wednesday night, losing a final score of 2-1. With their star senior Captain Ella McMackin going down with 15 minutes left in play with a calf cramp, the future did not look good for the Rebels. She would return to the game but her efforts would not get the win. On Monday, however, the girls proved resiliant putting down Norwood with a final score of 2-0.

Field Hockey: The Porkers are once again dominating the Bay State League with several wins this week: beating Norwood on September 24, 8-0, Dedham last Friday 7-0 and Milton 9-0.  Impressively, the Porkers have yet to be scored on this season and have scored a total of 52 goals against their opponents collectively. Fear the pig indeed!

Golf: The Golf Team had an impressive win over Wellesley, one of the best teams in their league, by 20 points. They are now favorites to win the Herget division.

Volleyball: Volleyball came out on top against Milton last Wednesday winning in 3 games. The girls smoked Dedham on Monday, winning in 3 games once again. Sophomore Summer King and junior Moira Crowley played great this week receiving players of the week from their coaching staff.

Girls Cross Country: The girls raced in their first home meet against Dedham and Wellesley last Thursday as well. They were succesful against both teams. Junior Gina Conti came in first for the girls followed by junior Captain Kristen Coyne.

Swim: The girls came into Tuesday’s meet undefeated. Recently, freshman Sam Chauvin is impressing people during her first year on the team performing exceptionally well in all the meets so far.

Most Valuable Rebel of the Week: Junior Maurice Young is the first ever MVR for Walpole High. Scoring two late goals to win the game for the boys soccer team in a very challenging game against Milton, Young definitely deserves this accolade.

Biggest Upset of the Week/Unsung Rebel(s): The Golf team came up big, impressing a lot of people this week defeating Wellesley by 20 points. Often overlooked due to other fall sports such as Football and Field Hockey, not too many people know much about the team. Wellsley, being one of the best teams in the league, expected to blow Walpole out but Rebel Pride never dies as the old saying goes, even on the golf course. The boys definitely deserve some recognition for their achievement and so they are not only given the biggest upset of the week, but they are also crowned the first Unsung Rebels of the week at Walpole high. Good work guys.