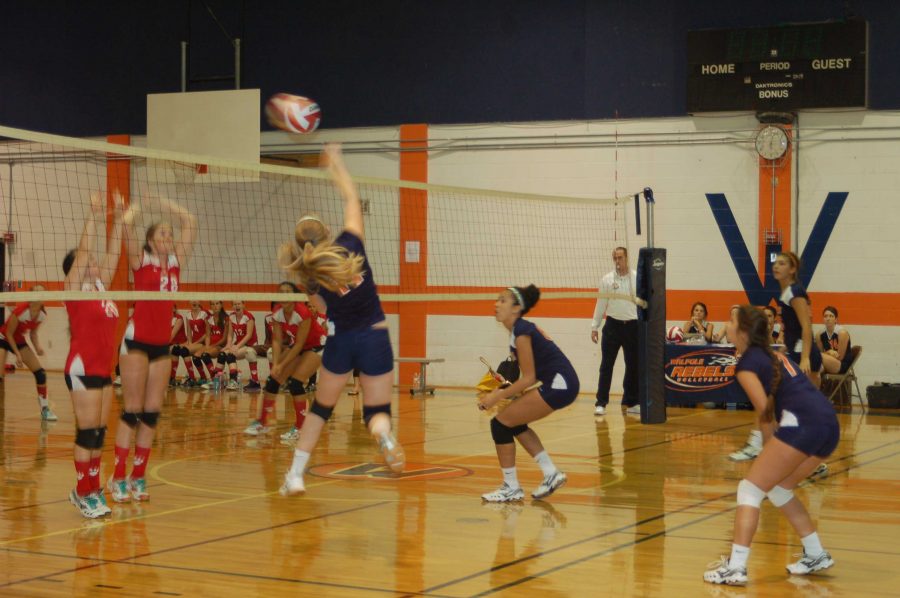 Girls Volleyball started out the season with a great win, but then lost 3 games in a row, making the game against Milton crucial if they wanted to get back on their way to a winning season and eventually tournament.  They entered the game on September 19 determined to win and because of that determination, they did just that in 3 quick games.

The first game began with evenly matched teams for the first few points, but the Rebels got into their groove and started working hard in every position on the court.  When junior Moira Crowley started serving, the score was 7-5 but she went on a serving run of 8 points and ended up helping the Rebels obtain a lead of 15-6.  With great passes, hits, sets, and blocks, it was obvious that Walpole entered the gym that day intending to take the game.  This goal was achieved in the end of the first game, which had a score of 25-14.

The second game was the most suspenseful of the three due to Walpole’s lack of serving ability, which was out of the ordinary, seeing as this is usually their best played part of the game.  Senior captains Lauren Bodin and Steph Barmakian played a huge role in picking up the team when they got down on themselves. Their powerful plays and enthusiasm was a very important part of the teams victory.  The team played up one anothers strengths in this game, since the serving was not up to its usual standard, leading Walpole to a win of 25-17.

As the third game began, energy was high and it was clear that the Rebels wanted to end it in three games.  The Wildcats made errors play after play, and Walpole quickly took the lead. Sophomore Summer King was doing her job on the court and making it difficult for Milton to make a clean kill.  The team never slowed down when they were ahead by a lot of points and King just kept hitting the ball at Milton and challenging them.  With a combination of Walpole’s confidence, ability, and drive to win, Milton could hardly get a point. The game ended with a score of 25-7 and another win for Walpole.

The Rebels earned their win against the Wildcats and they did everything they had to do in order to win, from diving for shanked balls to winning a point after a broken play.  They worked as a team and helped each other out when they needed it, and this hard work is what made them go from fourth place to second place in the Herget division.  The Rebels are hoping to keep their winning momentum going through the rest of the season, carrying them into tournament.