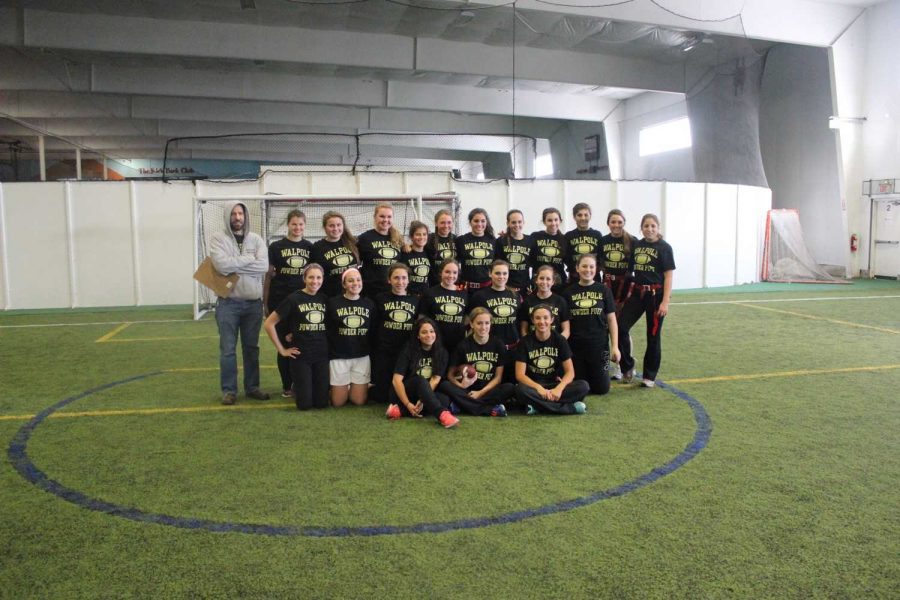 Victorious senior girls pose for a picture at the 2012 Powder Puff game.

One of Walpole High School’s many traditions  is to host a Powder Puff game between the junior and senior girls of the high school on the Wednesday before Thanksgiving. However, this year, the class of 2013 began something new. On Wednesday, November 21, the current senior girls became the first team in Walpole’s Powder Puff history to defeat their opponents two years in a row.

Coached by English teacher, Mr. Michael Alan, the reigning champions ended Wednesday’s game with a score of 22 to 12. The senior’s star players this year included the much-anticipated Samantha McChesney and Bridget Nicholson, both of whom have demonstated their outstanding althetic abilitites during their high-school careers. McChesney, Captain of the varsity cheerleading team, skillfully scored all three touchdowns for the Class of 2013 and Nicholson, Captain of the varsity basketball team, assisted her in scoring the PATs for the winning team.

The junior girls appeared to be a threat in the first half because of Lauren Regan’s touchdown within minutes of the start of the game; however, after this early blow to the seniors’ egos and confidence, the juniors remained offensively weak throughout the entire duration of the game. Regan’s strong athleticism, quick feet , and winning attitude did, however, make her a force to be reckoned with throughout the remainder of the game.  Senior Frankie Nardelli said, “Our biggest fear on both offense and defense was definitely Lauren Regan. She was scary out there.”

Mr. Alan said, “From the moment the game started, we knew that the juniors weren’t going to go down without a fight, and they definitely proved that with their first touchdown. But our defense really pulled through and won the game for us.” After Regan scored the first touchdown, the seniors’ attitude and aggression soared to all new levels. The senior girls concocted a unique plan to do something almost unheard of in Powder Puff history- a punt. This play immediately threw off the juniors and caused them to fumble the ball.  Running back McChesney took advantage of their moment of confusion to grab the ball and run for the seniors’ first touchdown. The game continued with strong defensive plays by seniors Jen McDonald, Jacqui Conley, and Michelle Monahan.

The seniors have Mr. James Lee and Mrs. Sherri McChesney, both parents of the players, to thank for leading their fan base into loud chants and applause. The dynamic duo even started the notorious wave to motivate their senior daughters and the rest of the teammates after half time. Fans and supporters of the Class of 2013 don’t have to fear missing out on the tremendous victory, however, because students in Mr. Alan’s film class are making a documentary about this year’s Powder Puff , including footage from the game and on-field statements from players.

The lack of senior attendance to the practices did cause some senior girls to worry about the possibility of being defeated on Wednesday being that this game could either cause one of two spectacular outcomes: the Class of 2013 could win two years in a row, or a junior class could have the chance to win two years in a row. With this in mind, both the players and the coaches had combative mindsets. Though the highly competitive attitude on the field did cause some verbal altercations, the senior girls are proud to say that they can finish their high school career regarded as the record-holding Powder Puff Champions. In the words of Coach Alan, “Seniors kicked butt!”

For a full gallery of photos from the game: