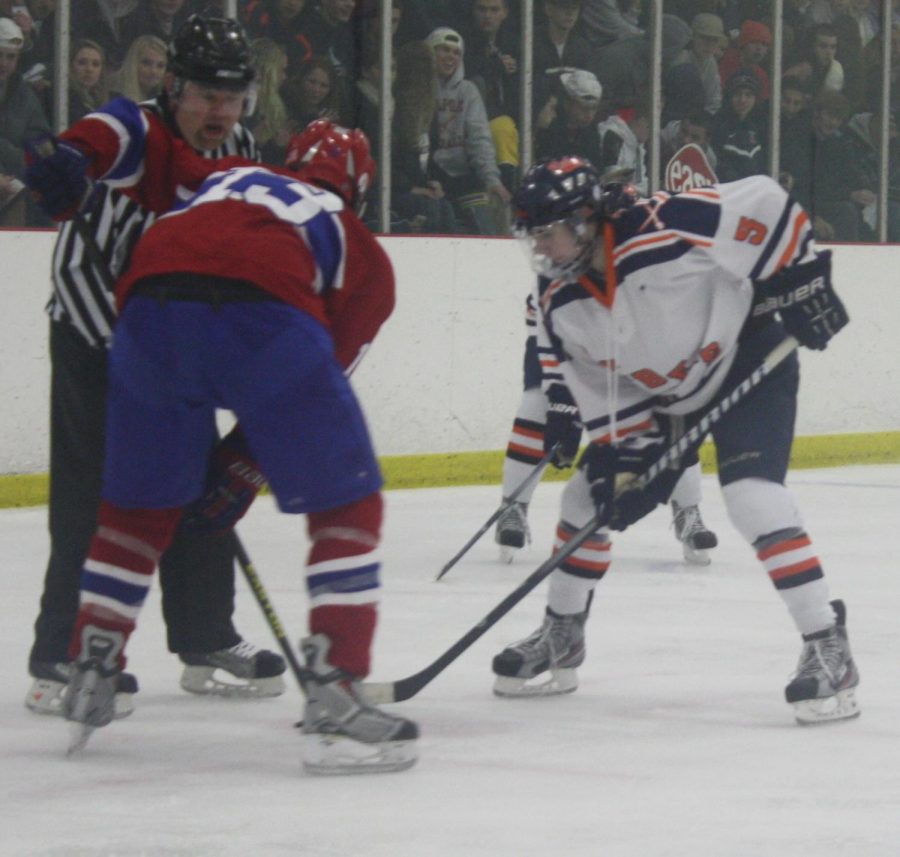 Walpole Rebel forward gets ready for the face-off

A hockey team is defined by how they close games out in the third period.  After a dismal season filled with ties and coughing up 3rd period leads, the Walpole Boys Hockey team put an emphasis on closing out games this year.  The team began their season Wednesday, December 12th against the 25th ranked  (by Espn Boston) Natick squad.

The Rebels Boys Hockey team consist of twelve seniors, who have considerable varsity experience, many having played for three years.  Natick has always been a strong and competitive foe that seems to have taken on the role as the hated rival for all sports in Walpole.  Natick’s strengths lie on the blue line with some of the biggest and strongest defensemen in the league.

The game started off with a barrage of Walpole attacks that would result in no goals through one period.  But as the second period began, the feeling was that the Rebels were the better team and a goal would come their way any time.  After a quick break out leading to a two on one, captain John White scored a pivotal goal off a rebound to put the Rebels ahead 1-0.  “We had the momentum and it was great to see a puck hit the back of the net” said White.  The score would remain the same entering the 2nd intermission.

With the third period being a point of much emphasis, the Rebels knew that the third period could define their season.  Quickly entering the period, White made a pass to the blue line, where senior Tyler Bailey unleashed a Zdeno Chara like bomb of a shot, picking the top left corner to put the Rebels ahead 2-0.  Later, during a lone effort trying to stall the play in the offensive zone while waiting for his teammates to complete a line change, senior Matt Bender made a quick move around the net and stuffed the puck home to put the Rebels ahead 3-0.  With just a little more then a minute left in regulation, senior Captain Alex Carde scored into an empty net, ending any hope Natick had for coming back.

On December 15th, the boys hockey team traveled to Newton North, looking for their first winning streak of the season.  “One win against one good opponent does not make a season” said junior forward Ryan Brown.  Within the first period the Rebels wanted to show that the win against Natick was no fluke, and that is exactly what happened.

Senior Matt Johnson started off a dominant period by the Rebels with a quick wrist shot from the slot to make the lead 1-0.  Shortly after that, White scored on a snap shot to put the boys team up 2-0. Not letting up, senior Chris Abbott took advantage of a defensive mistake and tapped home a rebound to make the game 3-0.

In the second period the Rebels wanted to keep their run of success going and it showed.  Bender scored his 2nd goal of the season, making the game 4-0.  “It was really good to see the puck hit the back of the net, but it’s better to see us still attacking and looking for goals” said Johnson.  A more glaring problem started to stand out for the Rebels.  After having struggles during the preseason with the penalty kill, they would give up two goals during the duration of the game while they had a player in the penalty box.  Newton North dominated the power play and would score late in the second period to make the game 4-1 entering intermission.

Last year, Boys Hockey was up 4-1 against Newton North entering the final period, eventually giving the lead up.  Starting off the period with a goal against them while on the power play was not a good sign. The score was 4-2, but with a majority of senior leadership on the team, the team was able to rebound quickly with a wrist shot from junior Tommy Macdonald. The shot ruined any chance Newton North had at coming back, and made the score 5-2.