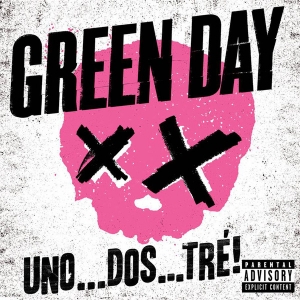 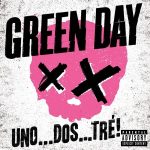 Green Day’s first major debut Dookie broke out at just the right time – the ’90s and early 2000’s marked a wave of success for pop-punk and garage rock bands (i.e. Blink-182, Fall Out Boy). The youthful, anthemic album was the most successful of the band’s attempts, as “When I Come Around” and “Basket Case” still get a considerable amount of radio play. Within the next six years, the band produced three more albums, Insomniac, Nimrod, and Warning. While they pleased many of their fans, none of the three releases measured up to Dookie. However, their next great success came in 2004 with “rock opera” American Idiot, followed up by the fairly consistent 21st Century Breakdown. After a three year hiatus, the band decided to release not one, but three albums – ¡Uno!, ¡Dos!, and ¡Tre! – over a span of just four months. The album trilogy highlights some of the best Green Day can offer while, at the same time, proves that the band is way past its heyday.

Released in late September, ¡Uno! proved a decent kick off to Green Day’s most recent installment. The album consists mostly of the band trying to stick to their original style, which proves affective on the catchy, brash “Let Yourself Go,” where Tre Cool’s sharp, consistent drumming stands outs. The youthful anthem “Carpe Diem” is another noteworthy track. Unfortunately, there is too much vulgar language and lack of meaningful lyrics to make the album enjoyable. Take “Kill the DJ” for example, the band’s most conscious effort to take a step in a new direction: the song was meant to be a dance floor hit, yet ironically, the lyrics ridicule mainstream, dance-club music. The album ¡Uno! overall is not so bad, but it is not great either.

The band’s November premiere ¡Dos! proved to be the worst of the trilogy. Other than standout single “Stray Heart,” a sweet, up-tempo love ballad, Green Day-style. A lot of the songs on the album seem to be no more than filler. “Nightlife” features the odd combo of a soft, female voice and a deep bass solo with a funky feel, a twist so unexpected that it is almost impossible to decide whether it is good or bad. “Amy,” a tribute to late singer Amy Winehouse, is more in depth lyrically than the previous tracks and has a slightly jazzy feel to it. The song is a respectable closer to an otherwise forgettable album.

The final chapter of the trilogy, December debut ¡Tre!, is driven by ballads similar to “Good Riddance (Time of Your Life).” It is definitely a step up from the previous work ¡Dos!, and arguably the best of the trilogy. Green Day delivers more meaningful songs on ¡Tre!, and the album as a whole flows better, reducing the listener’s need to skip over boring tracks. Opener “Brutal Love” is as soulful as lead singer Billie Joe Armstrong gets, as his slightly nasally voice flows seamlessly over jazzy piano notes and acoustic riffs. The album is pretty consistent all the way through, with the reminiscent, hopeful, “The Forgotten,” concluding the trilogy on a positive note.
¡Uno!, ¡Dos!, ¡Tre! was not a bad effort by Green Day at all – the band embraced the idea of experimenting with new styles and came out with some original, memorable songs; however, the trilogy also makes clear that the band is past its prime. Sadly, all good things must come to an end, and it is safe to say that Green Day’s trilogy is not strong enough to merit the success of albums like Dookie and American Idiot.