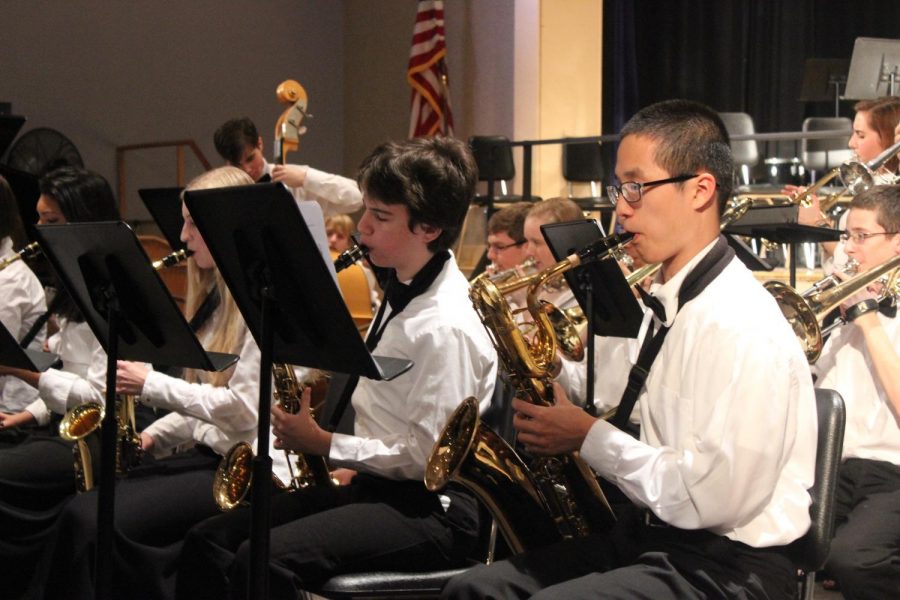 Members of the Walpole High Jazz Band perform at the Winter Concert.

Though the winter concert is always a popular event at Walpole High School, it is not often that every seat in the auditorium is full. However, on Wednesday, December 19, an exceptionally large crowd gathered to watch the band, jazz band, jazz choir, concert choir, and orchestra perform. Spectator Joe Guidoboni described the scene of the auditorium as “so packed that if you arrived early trying to find a seat in the front, you would have ended up sitting in the back.”
The band kicked off the performance night with renditions of “A River’s Fury,” “It Came Upon a Coventry Carol,” and “Carnegie Anthem,” starting the night off with classic concert pieces. They were followed shortly by the jazz choir, who filled the auditorium with holiday cheer singing “Winter Wonderland” and “Have Yourself a Merry Little Christmas.” The jazz band also kept the crowd entertained, as they provided a unique sound apart from the concert band. Their performance of “A Charlie Brown Christmas,” especially captivated the crowd. After the jazz band, concert choir entered with four pieces, starting with the merry “Dashing Through the Snow,” and ending with the loud, jubilant “A Choral Flourish.” Finally, orchestra – the High School’s largest musical group – closed the concert with three pieces: “Medieval Legend,” “O Holy Night,” and “Old Ironsides, Champion of the Seas.” The first of the three proved a very distinctive and enjoyable piece, while holiday favorite “O Holy Night” enchanted the crowd.
The night proved an achievement, and all audience members seemed to very much enjoy the music. What was memorable about the Winter Concert to those performing in it was the spectacular turnout. Violinist Hannah Mullen remarked, “I have been in orchestra for years, and this is the largest crowd I have ever seen at a concert.”  As for future concerts, head of the music department Michael Falker has high hopes.  Regarding the performance, he said, “For the first concert of the year, it was very good, and I was quite happy about the performance.  However, we have set ourselves a high benchmark.  The challenge will be at the April concert to show how much we have improved since December.”  Hopefully, the music department’s future concerts will be as successful and as well-attended as the past winter concert.