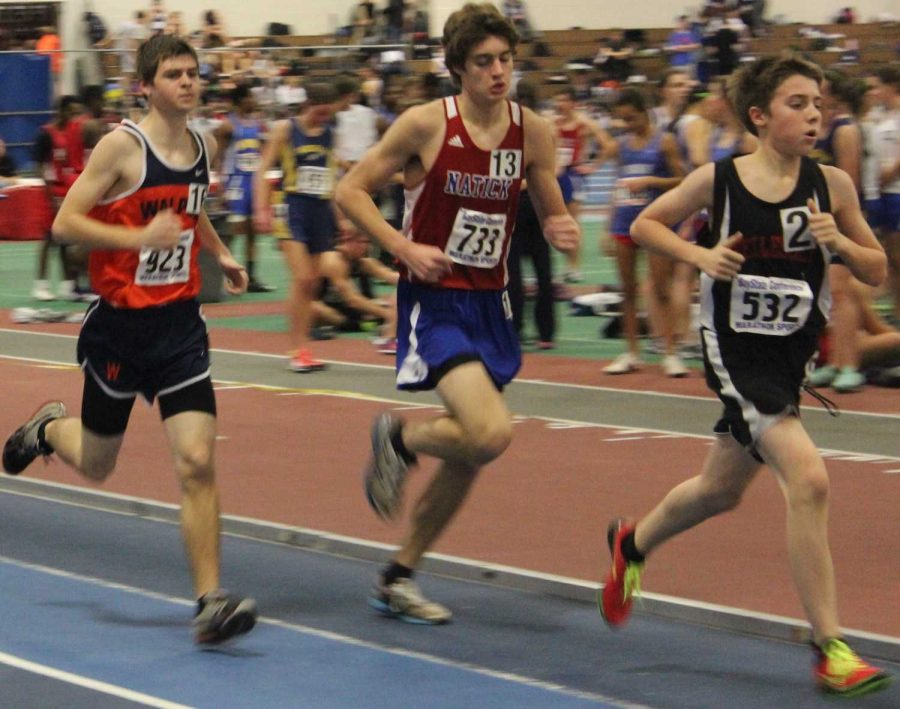 A senior racer competing in the mile finishes behind a Wellesley runner.

Walpole’s Boys Indoor Track Team lost to Wellesley on Thursday, January 18, and their record is now at 1-3. Compared to the last few years, Walpole has been weaker due to the loss of a few top athletes, and the other teams in the Bay State League have been much improved. Even with senior PJ Hayes returning from an injury to compete and many athletes competing better than before , Walpole did not have enough to overcome Wellesley. There was no definitive event that caused Walpole to lose; Wellesley was just an all-around better team.

Walpole faced, for the first time this season, a long distance team that not only matched their prowess but exceeded it. For the first race of the meet, the one mile, Wellesley swept. This doesn’t show a huge fault in Walpole’s team, though, as the opponents had three of the top six milers that meet. Senior Alex Fraser got his personal record down by five seconds to 5:08; sophomore Brendan Wohler, by two to 4:53. The next race, the 1000m, was similar in that Wellesley had three of the top five runners in the league. After the 1000m, the score was 18-0, and Wellesley only needed 30 points from the remaining nine events of the night. Although the opponents had the top racer in the 600m, the rest of the heat was comparatively weak, and junior Jon Kelland took second, scoring Walpole’s first three points. Senior captain Sean Herlihy had a great race in the two mile, bringing his PR down by 15 seconds to 10:11, and came in first. A half of a minute behind him, coming in second, was junior Mikey Van der Linden with a four-second-faster PR of 10:42.

Walpole’s sprinting crew greatly benefitted from the return of senior P.J. Hayes. In the 55m dash, Hayes placed first out of the entire Bay State League with a time of 6.60 seconds. He beat the runner up by .22 seconds, and he did not even run a personal best. The 55m Hurdle Dash had Walpole going one-two, with senior captain Connor McCarthy running a 8.07 second heat and junior Mike St. Germain coming .56 seconds behind. For the 300m, sophomore Tommy Helm ran 40.06 in his first time at that distance to place third against Wellesley. Walpole’s relay team had ran their 4x4oom relay faster than before, too, with senior Winston Ho, Kelland, Helm, and freshman Eamon McCarthy collectively achieving a PR of 3:51.66.
The field events (shot put, high jump, and long jump) is where Walpole came out on top. Junior Robbie Lederman threw the shot 34 feet, 9.5 inches—just half an inch farther than Wellesley’s TJ Noonan—and placed first. McCarthy also jumped in both the high and long jumps, placing first in both. St. Germain also did the long jump for his first time, placing third and giving Walpole another point.
Senior Captain Connor Mccarthy said,”We kind of came in knowing it was going to be a very tough team to beat, but we did well compared to the previous meets this season. This is probably the turning point of the season when we’re going to show a lot of improvement.”
Delete Image
Align Left
Align Center
Align Right
Align Left
Align Center
Delete Heading