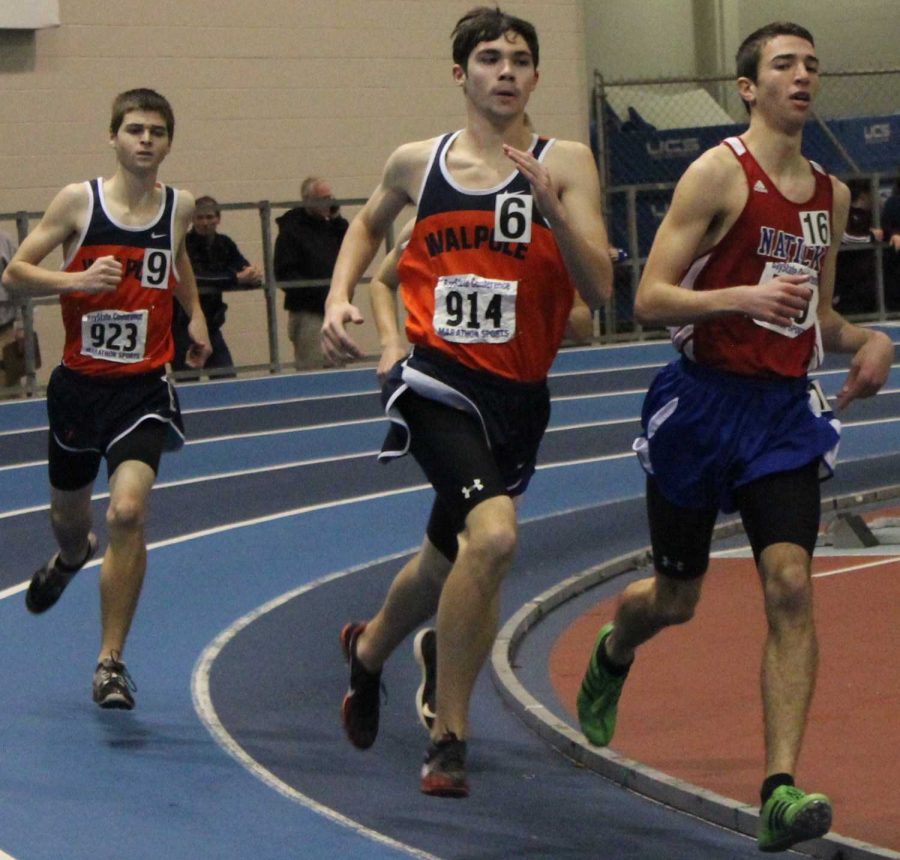 The Boys Indoor Team had a turnaround on Thursday, January 24, while competing against Natick, as they got their second win of the season under their belt. The meet was the closest one that Walpole has seen, with the final score being 52-42. The meet was almost tied toward end when the score was 47-42 and the final event, the 4-by-400m relay, was being run. As the third leg, sophomore Tommy Helm attempted to pass the opposing Natick runner while coming around a turn, but Helm was not allowed to pass as the Natick runner moved out and in Helm’s way, even making contact with him. What would have been a tie between the two teams resulted in a victory for Walpole  due to the disqualification of Natick in the last event. However, it would not have made a difference if not for the outstanding performances from many athletes across the board.

For the long distance program, although very strong and slated to get more points than Natick’s, they needed to step it up even more to relieve some pressure off their teammates who ran multiple events. Their coach, Mr. Timothy Giblin, asked for a total of 23 points for the 600m and up, and Walpole did just that. In the mile, senior captain Sean Herlihy led the charge with sophomore Brendan Wohler following close behind, together scoring a much needed eight points. Each ran a four second personal record; Herlihy with 4:47.21 and Wohler with 4:49.48. After his team mates set a precedent of victory, junior Jon Kelland continued it with another first in the 1000m race. Just a little more than a second behind him was senior Andrew Single. He ran a PR of 2:53.93, a hefty six seconds off his old best, but it was not enough to land him any points. The 600m was the roughest for Walpole’s distance crew, as Natick’s top racer beat junior Anthony DiVirgilio’s time by more than two seconds, but with help from senior Nick Culhane, both made sure that Natick only got a minimal jump on them. Freshman Eamon McCarthy also raced the event for his first time, achieving the second best freshman time, 1:37.64, in the past 10 years behind the aforementioned Kelland. Walpole’s athletes in the two-mile performed beyond expectations to further the lead. Junior Mikey Van der Linden won with an astounding eight second PR of 10:34.55. Behind him came a Natick runner who just nudged senior Kevin Delanely from the second place spot.

Along with the distance program, the sprinting athletes showed improvement. Senior PJ Hayes continued on his way to recovery and beat every other sprinter in Bay State League who sprinted the 55m dash. While competing over the next weekend, Hayes even managed to set the Massachusetts state record this season in the preliminary round for the 55m, but sat out for the rest so as not to incite another injury. Senior captain Connor McCarthy similarly ran faster than everyone else in the league for the hurdle dash, and over the weekend, he came in first at the Coaches Elite Meet with a PR of 7.66. Racing with McCarthy in the hurdle dash against Natick was junior Mike St. Germain, and he won the team a much needed and appreciated point. Yet again, though, the 300m sprint proves to be Walpole’s weakest event, as this was the sole race where Natick swept.

The field events were where the meet rested heavily on a handful of athletes, but they pulled through. Junior Robbie Lederman, despite not placing first, made an excellent throw that got him second place. In the high and long jumps, McCarthy ran the show per usual, getting first for both. He was the only Walpole jumper for the high jump, and had another jumper from Natick clear opening height, it would have meant defeat for Walpole if Natick was not disqualified in the relay. The long jump was tough for senior Jungwoo Yoon because he PR’d by over half a foot, but lost third to Natick by less than four inches.

Collectively Walpole had its strongest meet all-around against Natick, proving themselves worthy with the outcome of the relay. If Walpole wishes to continue its success while competing against the opposing Carey Division team, Framingham, on Wednesday, January 30.