Size not an issue for Walpole Wrestlings “Little Big 3” 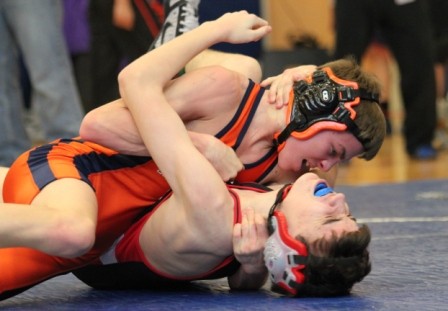 The Rebel's 106 pounder works to pin his opponent.

When it comes to the sport of wrestling, generally people think of a big, mean, ugly-looking meat head who one might avoid as a result of said description. However, this is merely false stereotype on which people have based their feelings about the sport.

Walpole’s Wrestling team Captain senior Caleb Cofsky is a prime example of being the complete opposite of this stereotype. In middle school, Cofsky was the runner-up in the cutest and best looking superlatives, winning the best all around superlative. Weighing in at a miniscule 132 pounds, Cofsky is not very big. He is quite the opposite of a meat head, as he was previously a gymnast, which has directly benefited him in his wrestling career. Head Coach Devin Pacelli describes Cofsky as “the most athletic kid [He’s] ever seen in terms of pure athletics, you can’t coach that”. Thus far this season, Cofsky has been wrestling outstandingly, defeating 6 opponents by means of technical pin fall, the slaughter rule in wrestling. Last season, Cofsky made it as far as the All-State tournament in the post-season, a tournament strictly for the elite. Additionally, he has only wrestled for three seasons. Pacelli credits Cofsky’s tremendous natural ability to his intelligence outside of the sport as well as his extremely hardworking persona, “He picks up on stuff very quick”.

Another example of a physically small wrestler with the heart of a champion is sophomore and second year wrestler, Joe Delaney. Wrestling in the lightest weight class in the sport, 106 pounds, Delaney is definitely not what most people picture a wrestler to be. Delaney’s first season was his freshman year, in which he wrestled on the junior varsity team. Delaney returned this season, defeating fellow classmate sophomore Kyle Kilroy for the varsity 106 pound spot in the line up, all on heart. “When you’re my size, there isn’t much muscle mass to you, you just never can quit”, Delaney said. So far this season, this philosphy has proved to be one that has helped Delaney succeed in his first varsity season. In the first tournament of the season which was also his first varsity tournament, The Jeff Parker Memorial Tournament at King Philip Regional High School, Delaney took fourth place. He has a winning record as well, proving to everyone that, “No matter how small you are, if you keep fighting, you’ll come out on top”, as Delaney put it. Pacelli describes Joe as a “confident, intelligent, tough wrestler, who is very competent. You can tell he’s a good athlete.”

Delaney’s class mate sophomore Nick Glover has been wrestling for the majority of his lifetime, and has always been one of the smaller guys. Glover wrestles in the 120 pound weight class, but even though the number isn’t very big, Glover still wins almost every match he wrestles in. Glover in fact utilizes takedowns specifically orientated around being big and strong, and executes them with perfection. Pacelli said, “Glover is one of the smallest wrestlers on the team, even for his weight class, but hes definitely the most aggressive”.

Pacelli agrees that when you think of your typcial wrestler, “you picture AC Slater, those that are good at the sport aren’t necessarily like that.” Wrestling is unique and different from other sports in that sense. Pacelli reiterates that it is a tough sport, but it is the most valuable one there is in terms of what you learn down the road. “Even if you lose, no one remembers that, but you bring the discipline and hardworking mentality with you after your career is over.” Those who participate in the sport are incouraged to emulate Cofsky and his practice partners, Delaney and Glover, and show up every day working harder and harder. Pacelli believes that those who stick with the sport and do not quit, no matter how miserable they may feel, are the kids who succeed, not just in the sport but in life itself. Pacelli sums up the sport with, “Wrestling is a tough and ugly sport, but once you understand the nuances of it, it becomes something very beautiful.”