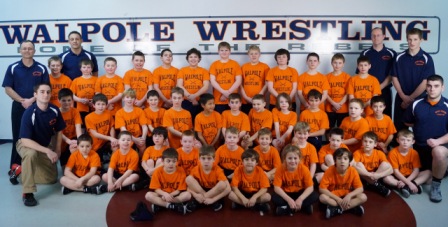 Recently, many parents of young children have been fearful of allowing there children to participate in most if not all contact sports. Most prevalent with football, parents have been searching for alternate sports to allow their child to participate in, but not all parents. Walpole resident Stephen Hile, started a youth wrestling program recently and the popularity of the program is surprisingly high. The program not only has been extremely popular, but has also done considerably well for a first year program in a town where wrestling as a sport in general is not one that is usually talked about.

The program itself is predominantly made up by third and fourth grade children who are first year wrestlers. With that in mind, Hile said, “We have far exceeded expectations. We have tallied over 100 wins in organized competition.” When Hile started the program, he had brought 10 kids from a previous youth program he ran in the town of Dover. Hile believed he would end up with 20 kids maximum once the season started. He could not have been anymore surprised when nearly 40 kids were signed up and ready to hit the mats in pursuit of their dreams of being atop of a podium one day. “I should have known [so many kids would join] considering the commitment of the parents and athletes in Walpole as a whole” Hile said when asked what he thought of the popularity of the program.

A few parents may have been fearful of allowing their child to participate in the program due to the sport being one of constant contact and combat. Hile believes, “wrestling is unlike any other sport. It builds confidence , self-esteem and intense physical fitness. As an individual sport, no one has to try out to make the team; you’re not too small or too slow. Everyone plays. I think this alone was enticing to get some parents who were looking for a sport for their child both boys and girls.” Hile believes that some children do pick it up a lot quicker than others, as well as they may have the advantage of being physically stronger or more physically mature for their age. A few of those kids would be Derek Petrucci, Timmy Sullivan, who both have 14 wins on their season, and Alex Takacs, who has 11 wins. Petrucci and Sullivan have past experience but Takacs is a first year wrestler.

Hile definitely would like to bring the program back next winter and believes this is just the start of what is going to become an elite program. Next season, Hile plans to divide the team into two separate groups by age. The K-4th grade age group would continue to wrestle each practice learning the basics of the sport and the fundamental keys to success. The 5th grade-8th grade group would work on other, more complex technique and mental preparation, as well as conditioning. Hile would additionally like to participate in weekly dual meets with his best wrestlers against other towns. Hile said, “I want youth wrestling in Walpole to grow and be just like all the other sports organizations [we have]”.