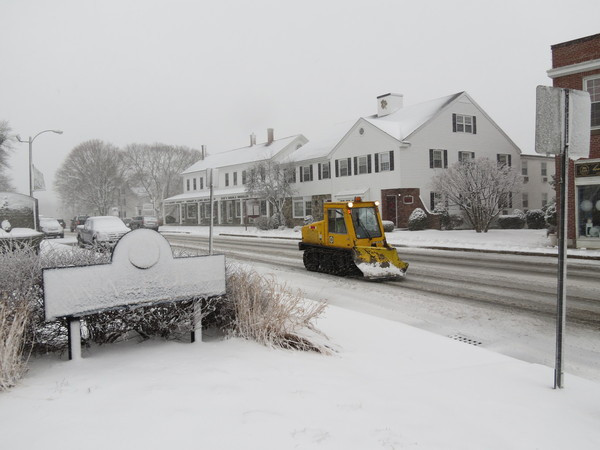 A plow trails through the center of town.

Waking up to a sheet of snow covering your grass, usually brings a smile of joy to one’s face.  You race to the nearest television to check the school cancellations.  Adrenaline and anxiety pumps through you as the “W’s” start.  You crack a smile and take a sigh of relief when “Walpole Public Schools” flashes across the screen with the best word you can imagine seeing, “Closed” underneath it.  Although this may seem like the biggest rush,  when you come to see this message too many times, it starts to become frustrating.  Students at Walpole High School no longer enjoy these snow days, that seem to be every other week, as it slowly chips away at their Summer vacation.

Some Walpole High School students are no longer thrilled to see their school’s name under the “Cancelled” list.  With every snow day that comes, the final day of school gets farther and farther away.  The final day of school was once set to be June 18 and is now set to be June 26 , pending that their are no future snow days.  For students who have already planned vacations or work, this change in the schedule brings about much inconvenience. Also students who may have booked vacations for immediately after the June 18 end of school date, will also find themselves frantic to reschedule.
Junior Bri Doherty has found herself in this position, for Doherty’s family booked a house down the cape for June 23.  Bri Doherty said, ” Now I have to find a ride to the cape and am missing out on three days of my family vacation.” Although many of the school cancellations have been necessary, some of the school cancellations have posed many questions.
The two snow days for Blizzard Nemo were obviously more than appropriate considering the Boston area received 24.9 inches of snow.  The two Nemo snow days served as a nice break for students.  However, ever since Nemo, the snow days have been racking up and are starting to annoy students.
Junior Elizabeth Ryan said, ” I would rather be in school in the winter, than have to make up all these days in the summer.”  This seems to be a common agreement amongst the under class men who have to actually make all these days up, unlike the Senior Class who has the luxury of having five free snow days built into their already early May 22 end of school date.
Many students can agree that, at this point, they would rather have a two-hour delay than an entire day off.  The previous snow day, on Tuesday, March 19, could have easily been a two-hour delay oppose to a snow day.  Walpole received about 2 inches of snow, but the roads were completely clear by the late morning.  People didn’t even have to shovel, for the snow melted so quickly.  All school cancellation  options need to be weighed when the weather poses questions.
Two-hour delays need to seriously be an option on the days where the snow is manageable.  Two hours gives the plows enough time to clear the high school parking lot and roads to a better condition.  Also, the two hour window allows for the snow to die down and make for easier driving conditions in general.  Although the school schedule may be tricky to work out with a delay, that reason alone should not steer the superintendent away from the call.  Norwood frequently called two-hour delays oppose to giving students the whole day off.  Students would appreciate the extra time to sleep, and still be able to safely get to school in order to complete a partial day.  Had a few of these snow days been ruled a delay, students at Walpole High school would not be sitting in class until June 26.
People can agree that being the Superintendent is no easy job.  Any call one makes regarding school cancellations is going to get mixed reviews. Students are tired of the snow day’s and just hope that the rest of school goes as planned, so they are not sitting in a classroom until July.  Even if the weather throws us a curve ball, which it always does in New England, the Superintendent needs to closely evaluate all the options available — especially the 2 hour delay.
Delete Image
Align Left
Align Center
Align Right
Align Left
Align Center
Delete Heading