Separate and Unequal: The Argument to Reopen the Girls Lacrosse Rulebook 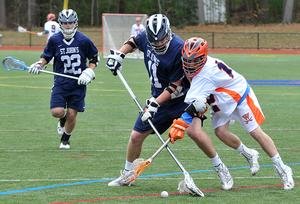 Senior Chris Frye fights off a St. Johns Prep opponent for the ball

Sprinting down the field, slashing with their sticks, checking opponents onto the ground, boys lacrosse players ferociously compete with a level of competitiveness comparable to hockey and football.  Reminiscent of the era of the Walpole Lax Alumni that housed players like Ryan Izzo, Davis Butts and Peter Bowes — these players would fly around the field like cars in the INDY 500 with fans just waiting to see the huge car wrecks.  For both fans and athletes alike, this type of wild competitiveness is tremendously thrilling.

On the other hand, Girl Lacrosse — with rules in place prohibiting physical contact — is like watching a faster golf game.  In early 2013, women officially were allowed to be in combat for the military.  Although they have been involved in combat for years, this official recognition of their bravery highlights that there is no difference between a man and a woman on a battlefield.  Why then should women be able to hold a gun on the battlefield for their country but not be able to check an opponent in a recreational sport?

While Girls Lacrosse has the speed of hockey, it lacks the intensity that this physical contact can bring.  The Walpole hockey players who play lacrosse recognize this unfair difference.

Senior Michaela Tosone, who played on Varsity Hockey and Varsity Lacrosse and who is known for a high level of competitiveness, dislikes the lack of physical contact in lacrosse.  Tosone said, “Obviously we don’t have as much [contact] as the boys, but I think there should be allowed more contact in lacrosse. Most referees barely even let you play defense on someone and it gets pretty annoying.”

Along with physical differences, there are also differences appearance-wise. In terms of uniforms, boys wear gloves, a helmet, shoulder pads, mouth guard and additional pads since they have full contact with the other teams.   For girls, they wear mouthguards, face-masks, skirts, and tank tops.

In most sports played by both genders — soccer, basketball, track, softball and baseball — the athletes wear similar uniforms.  However, when Girls Lacrosse became a high school sport, the uniforms and the rules reflected a separate sport altogether: Field Hockey.  While Field Hockey has a tradition of minimal contact, skirts, and mouth-guards, it has no male counterpart that is more thrilling to watch.  If Girls Lacrosse was truly the same sport as Boys Lacrosse (like soccer, basketball, track, softball and baseball), why are they dressed for Field Hockey?  Why are men allowed to wear contact equipment — shoulder pads and helmets — in order to be prepared for rough play, while women must refrain from contact altogether?  Is this 1950 or 2013? This noticeable difference often has people asking if women are being considered as a weaker sex that must be protected with rules that prohibit contact.

Girls are allowed to contact one another’s sticks against each other while sticks are by their sides, but never when it is over their shoulders during play; however, this is nothing compared to the freedom the boys have. These rules are an insult to women who, despite everything they do for the country as equally and efficiently as men, still have less advantages and opportunities than them.

In addition, there are even more unfair differences: Girls Lacrosse has a shorter field, more players allowed on the field, and shorter games. If the genders are truly equal, why are their games defined by different rules?

The field sizes are not drastically different, but it does make it larger for the boys league. Boys’ fields are 110 yards long and 60 yards wide with the goals spread 80 yards apart leaving 15 yards behind the goal. Girls Lacrosse is longer compared to the boys’ field and they have a smaller space behind the net for play. The girls’ goals are spaced 90-100 yards apart which is a greater length than the boys’ field. Boys Lacrosse is played with 10 players which is less compared to the girls with 12 players on the field at once. These differences are big changes that can affect the game.

For boys, four players must remain on defense at all times, while for girls, it is required that five players need to stay within the defensive area.  With fewer players on a larger field, Boys Lacrosse is a lot more aggressive and intense compared to girls lacrosse.  With more players on a smaller field and more players on the defensive end, Girls Lacrosse is bogged down with too many incidental stoppages of play caused by overly stringent system of rules.

The sport of lacrosse is loved by many but disliked for its sexist rules that make the women feel unequal compared to their counterpart. It is time that women’s lacrosse be reexamined. These players deserve the opportunities to show their true athleticism, just like the boys are able to do time and time again.