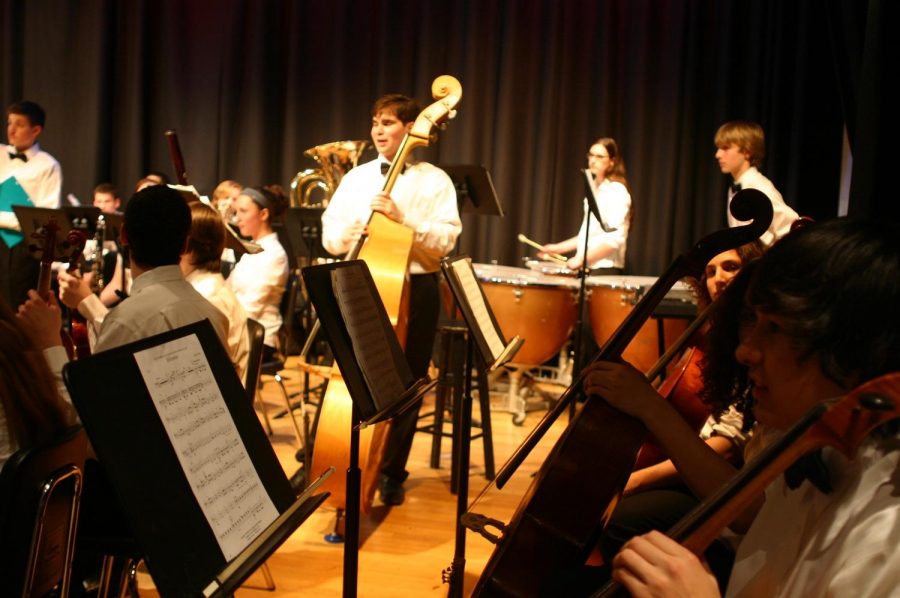 On Wednesday, April 10th, a crowd gathered in the auditorium to watch the Walpole High School music students as they enthralled the audience with their spring concert performance. All five of the music ensembles-Band, Jazz Choir, Jazz Band, Concert Choir, Orchestra- executed their talents by performing two or three intricate pieces. These teenage musicians showcased hours of rehearsing in front of the audience filled with family, friends, and supporters. The performers played and sang with utmost determination as they tried to show the importance of music to the onlookers.

The Concert Band began the night with a beautiful piece entitled “Encanto.” The highlight of the number was the sensational flute solo performed by freshman Julia Muller.  The second piece entitled, “The Old Red Mill,” was accompanied by interesting and engaging percussion sections. Afterwards, the band ended with their final performance, “Allego Barbaro,” which gathered loud applause from the crowd.

The band was directly followed by the Jazz Choir, a small group comprised of just twenty-one students. The first song they sang was “Lucy and Linus,” a well-known tune from the popular Peanuts cartoons. The challenging song did not have any lyrics, but the jazzy piano notes were sang a capella, making it a very interesting listen for all. The second song, “Birdland,” an enjoyable jazz piece, was accompanied with piano from junior Brian Hazerjian, bass from junior Andrew Hazerjian, and drums from junior Mike Van der Linden.

The third group to come on was the Jazz Band, another one of the smaller music groups. Their first piece, “Haitian Fight Song,” had excellent bass and trombone solos from a select few. The highlight of their next piece “Katie” was the beautiful alto sax solo performed by  senior Vandana Apte. Their final performance of “How High the Moon” featured the Jazz Band’s talented group of trombonists: Juniors Darnell Reese, Meghan Wheeler, John Ronan, and  freshman Andrew Wheeler.

The Concert Choir, the largest music group in the school, followed the Jazz Band. The group of  seventy-nine students from all grades started by singing “Blow, Blow, Thou Winter Wind,” a slower tempo piece including a solo from the soprano section. “On Some Solemn Shore,” the second song the chorus sang, was also slow paced and moving. The singers closed with an eccentric a capella piece titled “Ezekiel Saw the Wheel.”  The gospel piece, with dialect inflections and overlapping vocal parts, was the most difficult piece the Concert Choir performed.

The final performance of the night was from the Orchestra. They started by playing “Millennium,” a powerful piece featuring much of the brass section. The second song “Yorkshire Ballad” was a beautiful song similar to most Irish folk music that proved to be very popular to audience members. The group closed out the enjoyable night of music with “Overture to Nabucco,” doing outstandingly well considering the extreme difficulty of all three pieces.

The spring concert was a success, but as with any concert, it was not perfect.  The musicians took on the challenge of more difficult pieces than the last concert, resulting in a slightly changed outcome.  Junior concert choir member Katie Gillespie said, “Despite not performing as well as we had hoped, in watching the other groups I could see that there is a lot of talent in our school’s music program.”

Music director Mr. Michael Falker was also pleased with how the night went, regardless of the few mistakes made.  He said, “It was a little uneven overall.  There were many excellent things, but there were some problems.  This is always a possibility in any live performance.  No matter how well the students are prepared, sometimes there are surprises.  But overall, I am quite happy with the level of performance.”  After the challenging spring concert, Walpole High School’s music students hope to entertain again with the upcoming and anticipated Pops Night Concert that will take place on Friday, May 10th.