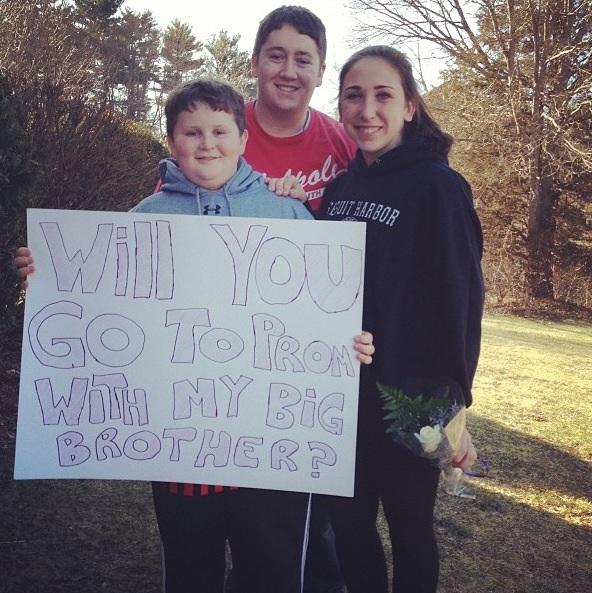 Most people think that a year consists of four seasons: winter, spring, summer and fall; however, they’re forgetting one very important season in the life of a high school student: prom season. Prom season lasts from about March to May, and depending on the person and his or her attitude, these three months can be exciting or they can be just overwhelming.

For most girls, prom season is the most stressful season of the year. Some girls, so frustrated with all of the prom talk, have even begun referring to the event and all of its lead-up as “The P-Word.” Once it hits mid-March, a girl almost cannot go a whole class period without being asked “Have you found a dress yet?” or a multitude of other questions concerning the big day. However, the most dreaded question of all, a question a girl cannot even avoid among family, is “Who are you going with?” As if the dress, the hair, the shoes, and the table are not stressful enough, girls spend months worrying about who they are going to prom with.

Just as females are stereotypically supposed to like dolls and the color pink, tradition has branded the idea into the brains of high school girls that they have to sit around for a boy to ask them to prom. Girls wait, on the edges of their seats, for the perfect guy to come around and ask them to prom in the perfect way.

Women are not thought of as weak, simple-minded creatures anymore. Hillary Clinton is going to run for president. Marissa Mayer is the CEO of Yahoo!  There are more women in the US Senate than ever before. And it is about time high school girls also break the binds of gender roles on a smaller scale and ask their dates to prom. I took this mission into my own hands and broke away from tradition. Or rather, Mr. Cashman took it into his hands.  Simply writing about recent prom proposals and an advance story of the upcoming prom was not going to satisfy Cashman.  He wanted me to write an entertaining feature about gender roles, teenage awkwardness and the stressful anticipation of the most formal event in high school.

“Aurora, you’re going to ask a boy to prom,” were his exact words.

Translation: “How can I cause Aurora to be more awkward than usual?”

After some consideration and a fairly modest amount of peer pressure from senior co-editor-in-chief Jake Moser, I agreed to take on the unthinkable task of a senior girl. The question in my mind changed from “Who is going to ask me?” to “Who am I going to ask?” and “What boy could handle a girl asking them?” All of these questions were quickly answered after some discussion among friends, and my date of choice was my good friend, Walpole High graduate, and film festival star of “The Snacker,” Joe Wyman. With a prom date in mind, I had to consider how to conquer the real obstacle: how I was going to ask him.

A stereotypical prom proposal involves a boy putting himself out there to ask a girl in which the creativity is meant to equal how much the boy actually wants to make this girl his date to prom. As someone completely new to this side of the process, I had to do some research in order to decide how to perfectly pull this off. Most high school students are wrapped up in the idea that a prom proposal needs to be as extravagant as a marriage proposal.

In order to figure out how to perfect asking my date to prom, I asked around the senior class for advice. Senior Samira Frangie said, “I would rather a boy be creative about it than him just ask me straightforwardly.” However, the classically creative prom-sign-on-the-locker or the pepperoni pizza ideas have even become too simple. Boys have begun to go completely out of their way in order to impress their dates, as if a girl would reject them if they did nor show up on horseback with a dozen roses and a marching band.

As Moser talked me into writing this article, he cited his own creative proposal: Moser had his little brother knock on girlfriend, senior Micaela Barry’s, door while holding a sign that said “Will you go to prom with my big brother?” while Jake waited in the driveway. Micaela said, “Obviously I was going to say yes to Jake anyway, but Brendan’s involvement made it funny – who could say no to that face?!”

At this point, co-editor-in-chief Andrea Lee chimed in with how her boyfriend, senior Jackie Gately, asked her.  He took an even more grandiose approach to asking her by setting up a scavenger hunt around the school that ultimately led her to him popping the question by her car in the parking lot.

Although huge prom proposals are thought of as almost necessary in this day and age, girls do not realize all the stress that goes on before the question is asked. As if fear of rejection is not enough, “How should I do it?” “Where should I do it?” “Is she going to think this is stupid?” “What if I go through all this and then she says no?” are only a few of the questions running though the mind of a boy about to ask a girl to prom.

Senior Mike Habib said, “Thinking of a creative way definitely adds a lot of stress to the process.” Habib’s advice pointed me in the direction of just casually asking my date. I figured the asking process being creative or not wouldn’t be a big deal to a guy since even some girls do not mind being simply asked. Senior Ally Russo said, “I think being asked in a creative way would be awesome, but it’s definitely not necessary. The fact that the boy is even asking you should be enough.”

Similar to other girls who have asked their dates to prom, I was initially going to ask Wyman when prom was brought up in conversation, like senior Darci Bruce who asked her date to this year’s prom through text.

Likewise, senior Michelle Monahan asked her date to last year’s prom. Monahan said, “I didn’t do it creatively. I wouldn’t want to put on a show.”

However, senior Becky Chariton easily convinced me to ask in a more creative way.  As he is known (in true “Snacker” fashion) for making different kinds of omelettes every time he comes to Michael Habib’s house, Becky and I decided to use a black sharpie to  write “Prom?” on five separate eggs, so he would see it once he opened the carton.

So, like every other Friday night, Joe, along with some other friends, came to the house. However, unlike every other Friday night, Joe didn’t immediately jump to the fridge or even talk about making food. My mind was filled with the feelings of every person about to propose: worries of rejection, images of failure, and worst of all — suffocating awkwardness. Every time he was even near the kitchen, I hoped he wouldn’t pull out the carton of eggs with an awkward amount of people around or even worse — when I wasn’t around.

However, the worst thing, something none of us even considered, happened: he didn’t make eggs. Despite all of Habib’s nagging and requests throughout the night, Joe decided he just wasn’t feelings eggs that night.

He left with no eggs and subsequently no prom date.

So, after panicking for a little while and regretting not taking the initiative to do it while he was there, I was pressured by Habib to text message a picture of the carton to him. This text resulted in about ten minutes of more panic and regret until I finally received a call from him – which I almost ignored in a second of hysteria. Without even a “hello,” his first words were, “Did you just ask me to prom?” When I told him I did, he responded, “Well yeah, of course I’ll go!”

Anxiety-free, I relived the initial botching and ultimate success of the prom proposal in a three minute phone call with him.

Although Wyman has told me multiple times since the proposal that I should have done it in person, he still approves of the way I asked him. Wyman said, “I thought it was really good because it was an inside joke between us so that made it kind of personal. Not just anyone could have done that.”

Similar to Wyman, who was excited to be asked, other boys such as junior Justin Rouhana think girls should ask their dates to prom more often. Rouhana said, “I think it would be cool if a girl asked me to prom. It would show that she’s really confident and chill.”

However, some boys completely counter this argument. Senior John Lochhead said, “I would feel emasculated if a girl asked me to prom. The boy is supposed to ask the girl, that’s just how it goes.”

Or, at least text him.