Annual Pops Night Concert a Lively Sendoff for Class of 2013 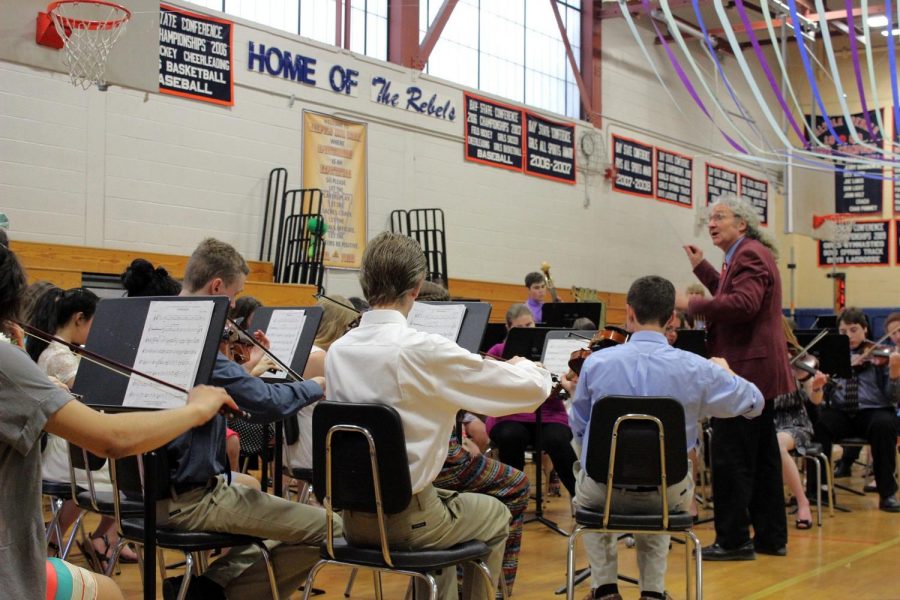 The annual Walpole High School Pops Night is an event that always comes with high anticipation; alhough the Winter and Spring Concerts are well-attended, Pops Night has an exciting atmosphere different from the other music performances throughout the year. On Friday, May 10 at 7:00, the gymnasium – decked out with streamers and filled wall to wall with tables – was filled with spectators. While enjoying a selection of homemade desserts, listeners watched the music department’s various groups perform not only classical pieces, but also interesting renditions of popular songs. It is a fun night for performers as well, who swap their usual formal black and white attire for more casual clothing and have the opportunity to work with music they are familiar with.

The first group on stage was the orchestra. They began the night playing “Millenium,” a difficult piece that they had spent a lot of time working on for the spring concert. Following much applause, they continued on to play a rendition of themes from the epic, well-known film series Star Wars, the most climactic of them being “Main Title,” the renowned music from the opening credits of all the films.
Concert choir was up after the orchestra, singing a choral arrangement of Coldplay’s hit “Viva la Vida.” The upbeat song sounded very interesting with the inclusion of harmonies from different vocal parts. Next, the chorus sang “Cantar!,” a latin piece with mostly Spanish lyrics. They continued with “Someone Like You,” Adele’s famous radio hit. Like “Viva la Vida,” “Someone Like You” was especially captivating because of the new harmonies added. The group closed with “Ezekial Saw the Wheel,” a gospel a capella piece that they had performed at the spring concert.

After the Chorus performed, music director Michael Falker took a moment to recognize the graduating seniors, calling all of them up to the stage and taking the opportunity to thank them for their participation.  The seniors also had their opportunity to thank Mr. Falker for all the time he has taught them music and been a part of their lives.  The special recognition of the seniors was a great sendoff for the graduating class.

Afterwards, The Jazz Band played “Mercy Mercy Mercy,” a piece by Joe Zawinul. The highlight of the song was the excellent trombone solo from junior Meghan Wheeler. They continued to play “Una Mas” by Kenny Dorman and “What is Hip” by Paul Murtha. Alto-saxophone soloist, senior Vandana Apte, also was a highlight.

Following the Jazz Band, the Jazz Choir opened with “Somewhere Only We Know” by Keane, singing an impressive version of the popular alt-rock ballad. Next, the group sang “Linus and Lucy,” the popular theme from the Peanuts cartoons. They performed the highly difficult a capella piece previously at the Spring Concert, and came back with an even better reprise of it. The other song was Michael Buble’s “Haven’t Met you Yet”; all three, well known songs were popular with the audience.

The band performed last, starting with “Aventura,” a softer sounding piece dominated by flutes. Next was “Ghost Fleet,” a song that seems quiet until it builds up halfway through. Finally, they performed the well-known tune “Rise of the Valkyries” from opera Die Walkure and from the film Apocalypse Now.

Pops Night was a success to both the audience and the performers. Junior Tori Martin, who had never before attended a Pops Night concert, said, “It was very entertaining, and I liked that it had a more casual atmosphere.” Music director Michael Falker was also impressed with the final concert of the year, saying, “Pops night was basically excellent! I thought all the groups performed quite well. Each senior had their moment in the sun. There was a big, enthusiastic crowd.” The night proved a great send-off for the seniors, who received special recognition in front of the audience for their participation in the music program.