A New Era Begins for the Rebels Football Team 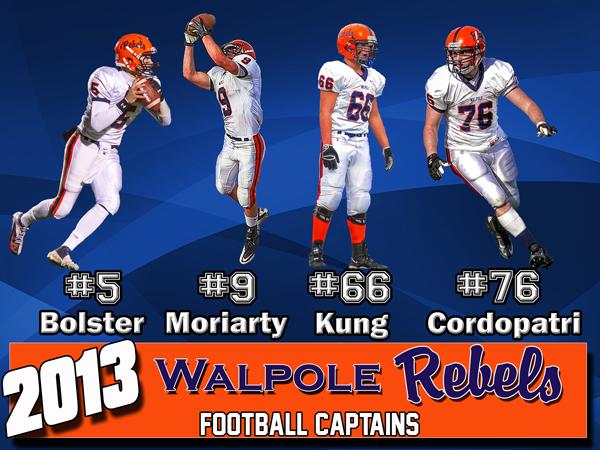 Summer has come to an end and the start of a new football season for the Walpole Rebels has begun. Like usual the season will be full of high expectations with the team looking to claim the Herget title as well as get a playoff bid. Yet, while the expectations will be no different this is an entirely new team with new players, schemes, and coaches. Meaning the 2013 season will be an interesting season for the Rebels to say the least.

The first change that the 2013 Rebels have to deal with is replacing the class of 2013. Many starters have graduated leaving just as many inexperienced players to take off where the seniors left them. However, this inexperience is not for a lack of talent in the underclassmen, but rather, the tremendous talent of the graduated seniors (ten seniors are going on to play college sports with eight playing college football). As head coach Barry Greener put it, “Many of the sophomores and juniors were talented enough to play, but the seniors were just so good that the underclassmen could not get on the field.” Furthermore, the underclassmen have dominated in every facet of the game against their opponents whether the freshman team or the JV team either  have rarely lost. Yet, being talented is not everything and if the team does not adjust to playing full time on Varsity they will struggle. On the inexperience Greener stated, “We have a lot of greenhorns that will be playing this year, and our success comes down to how fast they develop.”

Another change for the 2013 Rebels will be the offensive and defensive schemes. This year the Rebels will be changing to a spread offensive system because it will be playing to their strengths. Senior linebacker Mike Fortin said, “We have a lot of athletes on the team that can make an impact outside the numbers.” Leading this pack of receivers will be junior Andrew Papiro and senior Colton Mitchell, and promising upcoming sophomore Amire Loftis. To help with coach the passing game, the Rebels have brought in Walpole legend and recently retired NFL quarterback Todd Collins. According to Barry Greener “In the words of former Redskins coach Joe Gibbs, ‘Todd Collins is the smartest player I have ever coached.'” Easily the biggest strength for the team is the backfield where the Rebels have immense talent led by Captains Connor Moriarty (who will be the feature back) and Will Bolster (who will be returning as the starting quarterback). On how good the backfield is, Bolster stated, “I thought we had the most talented backfield in the Bay State last year and my opinion is no different for this years team.”

Along with a change to a spread offense the Rebels will be changing to a 3 Stack defensive system. On the perks of a 3-Stack defense, Coach Greener stated, “It’s a very deceptive defense and is great against the spread.” This defense will come in handy against arguably the Rebels biggest Rival, Natick, who will be lead by Boston College bound quarterback Troy Flutie. The defense will be led by newly appointed defensive coordinator Joe Abate, who will have help from outside linebackers coach Shawn Famiglietti and defensive backs coach Dave Wall. All three coaches have at one point been defensive coordinators and in the words of coach Greener “all are very experienced coaches, therefore we have no worries that they will succeed.”

In conclusion, a new era has begun for the Rebels after the class of 2013 (one of the best to come through Walpole High in the last decade) graduated and with it comes new coaches, players, and schemes.Yet, a playoff bid and a Herget title are definetly expected–as it is every year for this perennial powerhouse of a town–because Walpole has the talent, the desire, and most importantly the coaching staff to put both of these together and make a winning team.