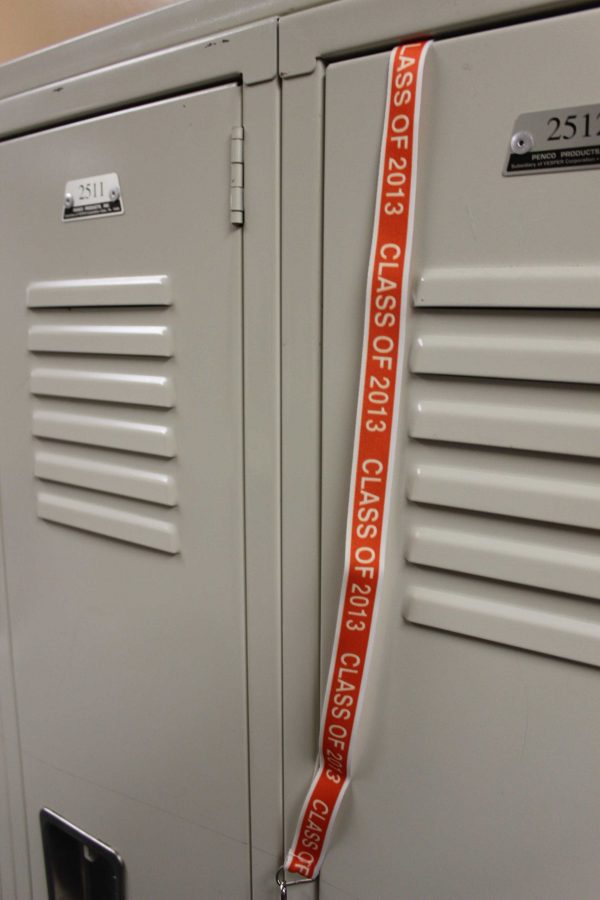 A senior student locker from last year could now belong to a senior of this year because of locker changes.

Senior Casey Ganshirt returned to Walpole High School for another year on Tuesday, September 3rd. Like many other senior students on the first day, Ganshirt wanted to leave a good first impression on her teachers and classmates.  Her day went the same as it did for other students:  arrive at the same time you have always arrived to school, talk with your classmates about the summer, put your books in the same locker you had from last year, go to the same homeroom you had last year, and let the routine of the school year begin.  However, as the Senior Class returned from an assembly to report to a lengthy afternoon homeroom session, things “weren’t normal,” according to Ganshirt. Students in the math wing — all of them seniors — were infesting the hallways semi-frantically and confusingly.

A friend noticed Ganshirt’s confusion and said, “We have to change lockers.”

Unlike in years past, every one of these students received new lockers — some of them being in new wings. The X2 Aspen system — usually used for grade reporting — took on the new responsibility of locker assignments.

The program randomized new lockers for students, and put many in an unexpected and unwarranted bind of having to move.  And since the precedent for such a change never existed and further notice was never given, confused students’ locker questions followed accordingly:  why is this necessary? Why did teachers not tell us about this in the morning? Why is my locker now in the history wing?  But unfortunately, as many students have noticed, most of their questions have gone unanswered, or could not be answered.  All the changes, however, could have been direct results of a new incoming freshman class and 40-50 new non-freshman transfer students.  This large quantity of new, miscellaneous transfer students may have created space conflicts in terms of lockers, and caused administration’s decision to assign all students new lockers.  And while integrating new students into their class is extremely important, does this process really require moving every single sophomore, junior, and senior to a new locker?  Do students really deserve to be moved without any forewarning?

The answers to these questions are apparently not forthright, but they matter, for this transition was a disaster:  no notice, warning, indication, or explanation was ever given to students beforehand.  Our lockers — where we keep all our personal things and books — are important to us, and hold things that are important to us.

So when senior Kevin Curran arrived to his locker to find “[his] books on the ground outside” — with new books and items in what he believed was still his locker — he, like Ganshirt and like nearly every other student, had no idea what was going on.

That morning, he had walked into the math wing and put his things in his locker while teachers, who stood right outside their doors, saw him and said nothing about him not being able to do so.  As Curran said, “No one told me in the morning that my locker I have had for three years might be in the school basement.”  Although Curran’s locker did not end up in the basement, his frustration reflected the student response to this abrupt switch.

More than the frustrating switch, some students were just confused by the administrative move.  Junior Rachel Goula said, “My locker isn’t that different, but I still don’t get why they had to move everyone.”

Things went even worse for some students, whose books and other school items disappeared during the locker transition period.

With Senior Bobby Ross, he put his items in his locker that morning, but during the homeroom lunch block a teacher assigned another senior to Ross’s locker and that senior removed all of Ross’s books from the locker and left them on the ground.  “A couple of my books were gone, but I got them back.  It was just a mix up,” Ross said.  Others, however, still have not gotten back their personal and academic items, which, obviously, is pretty unfair.  Most would agree that a school-led decision should not result in prodigious thefts and lost items, but that is exactly what happened.  And apparently, administration is rather unconcerned over the issue.  Student complaints to the main office over problems such as these have yielded little change or explanation from the source of the actual idea — the school itself.

Obviously, administration needs to communicate better to students.  Students absolutely have the right to know when they will be expected to do something such as this, and the fact that students were never told in the morning that they were expected to switch lockers annoyed many students.  Those forced to move to the basement, the English wing, the history wing, or the science wing — away from their class’s locker area — had no idea why; they just did as they are told and could not do anything else.  The reason they did not and still do not like new locker changes is because no one ever told them about the changes ahead of time. The reason they are still upset, however, is not that head scratching.  Locker changes did not go smoothly.

The first day of school can be full of new changes, and students deserve explanation of everything that happens.  Contrary to teenage stereotypes, most students actually do like to know what is going on; and even if they dislike a new policy or decision by the school, when informed at least they know and can ask questions.  That communication was totally absent on September 3.  While Casey Ganshirt and many other students left a good first impression on their peers and teachers, the same cannot be said of administration.