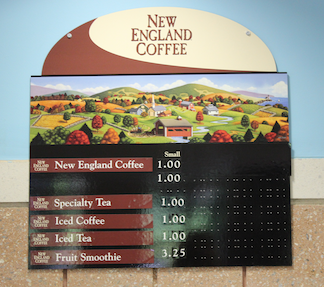 With their hearts pounding and Dunkin’ Donuts coffee cups in hand, students back in 2012 would attempt a near impossible feat every day—sneaking coffee into Walpole High School. The stakes were high for this group of hooligans, but the rewards were always worth the risk. If successful, they earned a caffeinated buzz to keep them wide awake. If not, students earned a feeling of defeat as they were forced to throw their coffee in the trash.

Students will no longer need to commit this misconduct to keep energized during the 2013-2014 school year. Walpole High School is now allowing the sale of coffee, tea, and smoothies in the cafeteria. The drinks are on sale in the morning and during lunches at the snack bar. From iced coffee and smoothies for hotter weather, to hot coffee and a range of teas for cooler weather, the coffee bar covers all the basics. All at affordable prices for students.

However, students are still not allowed to bring coffee into their classes, even if they buy it at school. Principal Stephen Imbusch feels that sticking to the old rules on drinks in class is the best move for the school. Rather than risk students spilling their coffee and making a mess, Imbusch prefers to only allow water in class.

As an avid coffee lover, Senior Montana Gulbrand disagrees with policy involving coffee in classes. She wishes that students were allowed more freedom with drinks, and hopes it will change someday in the future. Gulbrand said, “I just think it’s kind of a silly idea.  If we can buy coffee at school, why not bring it to classes?”

Like the privilege of seniors being allowed to leave school early, coffee sales in the cafeteria is a popular change. Even though coffee is still not allowed in classes, selling coffee in the cafeteria is welcomed by the high school teachers and students alike. Already, the coffee has gotten positive feedbacks from students who have purchased it. Hopefully, it will be here to stay.