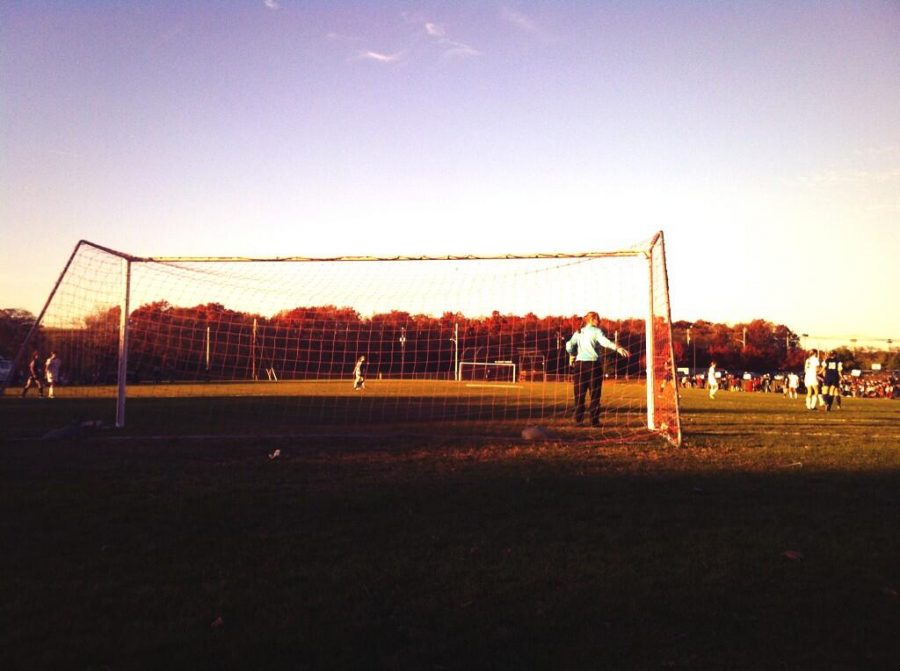 Walpole goalkeeper gets ready for a cross.

No penalty kicks necessary this time.

In the Division 1 South Sectional Quarterfinals, the No. 19 Girls Soccer team took care of business in regulation, defeating No. 6 North Attleboro 2-0.  Walpole got goals from junior Steph Lund and senior Captain Lauren Regan in the first half and another shutout performance in net from sophomore keeper Kaitlin Brown in advancing into a semifinal for the first time since 2001.

“We couldn’t put the ball in the net the first two games . . . scoring has been a problem for us all year,” said Regan. “It felt good to score first and relieve the pressure.”

The scoreless streak ended in the first four minutes for Rebsoc after Lund made a deft shift at the top of the box to free up her left foot and booted a shot in the right side of the net for Walpole’s first lead of the tournament.

“I don’t usually score, so this one felt extra special,” said Lund. “Lisa Regan gave me a great pass and I was just able to finish it.”

The lead was nearly erased immediately as North Attleboro responded with a great bid less than a minute later, but Brown came up with a momentum-saving stop to keep edge at 1-0. Brown made six saves in all and has yet to allow a goal in 280 postseason minutes. Junior Abby McMackin, senior Captain Abbey Smith, and junior Annie Gallivan again held the fort for the Rebels, who have been the best defensive team in the tournament.

Girls Soccer doubled the lead with 10 minutes left in the first half. Lund started the play with a pass to Lisa Regan, who found sister Lauren with her back to goal. The senior chested the ball down, squared to the net, and blasted a shot past the NA keeper to make it 2-0.

Rebsoc will take on No.2 Bishop Feehan in the South Sectional Semi-Finals today, November 7.