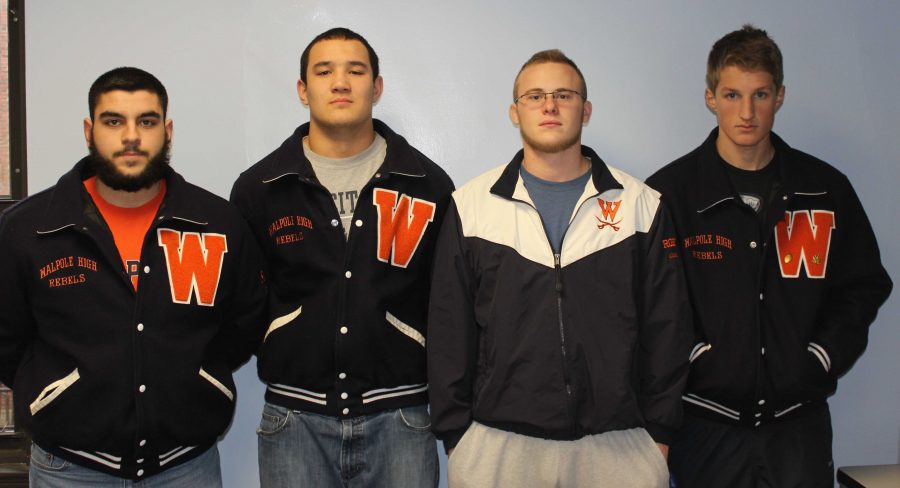 The Wrestling captains pose for a photo.

According to Head Coach Devin Pacelli and senior Captains Noah Kung, Trevor Wassel, Kyle Robbins, and Justin Rouhana, the Walpole Wrestling team is going to be the strongest they have been in years. The team had a dual meet record of 14-9 last season and “will definitely do just as well if not better,” said Kung.

Varsity, which is made up by mostly seniors with a minimum 3 seasons of wrestling under their belts, has plenty of experience on its roster this season.  “Other than the expected Kung and Robbins, I think people should keep an eye on a couple guys such as [senior heavyweight] Armen Andonian and [junior former 106 pounder] Joe Delaney,” said Pacelli.

The main weakness this year is the general health of the team in regards to falling to injury, and strength and conditioning according to Pacelli. Last season, the Wrestling team was without Captain Eric Jansen for most of the year.

However, Pacelli believes that “if [they] can get into good physical condition, [they]  will be able to mitigate this issue.”

The main strength of the team will be experience, something they have been lacking for the past couple seasons. “While it oftentimes seems the same as any other match during the year, there is definitely another quality to it that goes a long way as the seasons go by,” stated Pacelli.

The leadership on the team from not only the co-captains, but the senior class as a whole, will help.

Pacelli said, “It is most especially helpful that seniors, for the most part ,are all mentally tough and physical wrestlers—the only two components that all champions of any level share.”

Pacelli’s outlook for this season is a hopeful one. Pacelli said that the team as a whole made “real strides last year and should be more successful this year.”