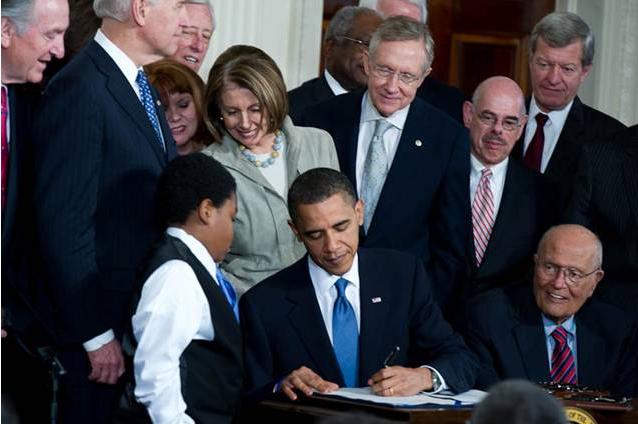 On March 23, 2010, President Barack Obama signed the Affordable Care Act. Since then, the law has had many problems (NPR).

From the Country Music Awards to Rush Limbaugh to even The Daily Show, seemingly everyone from all political backgrounds is mocking Obamacare.  Since the program’s launch, the healthcare website has crashed on several occasions, and millions of Americans are unable to register for Obamacare.  At the CMA’s, Brad Paisley and Carrie Underwood opened the show singing an ode to the President’s project entitled “Obamacare by Morning.”  Though it was sang in jest, the song did express the ongoing frustration felt by of millions of citizens nationwide who were met with great difficulty applying for healthcare via healthcare.gov.  As Carrie and Brad pointed out, the heathcare site processed “over six people” because that was all the healthcare system’s site could seem to handle.

The site only managed to successfully  register 25,000 people during the month of October, for it impeded the supposedly simple process of registration by crashing on millions of Obamacare candidates.  Though the Obama administration aims to accumulate over seven million applicants by the end of March via the recentlly fixed website, the President’s logic appears slightly flawed. Even if the lofty goal is attained, how useful is it when 48 million Americans are uninsured?

And, even if the registration numbers do improve, the greater concern is the demographic that makes up those numbers: individuals who are sick.  In order to survive, Obamacare will need a significant number of healthy individuals to sign up, for it is their  insurance payments that will offset the health care costs of the most sick.  If those healthy people refrain from signing up and if insurance companies are solely dealing with a demographic of sick individuals, their health care will not be as affordable as it is promised.  Instead, the country will experience something much worse than a failed website rollout; it will experience  what people are calling a death spiral — a term used to describe how the most sick individuals will make the Affordable Care Act  become vastly unaffordable and potentially lead to the program’s collapse.  This potential collapse would not be a website problem for the Geek Squad; this problem would be a policy problem that would have much greater significance.

Additionally, some individuals who believe that they have successfully signed up for the healthcare system may be in for a startling surprise. The site is now sending insurance companies incomplete information of consumers who signed up for the Affordable Care Act — an oversight that will eventually leave these people uninsured and the government again at fault.

The system’s failure is an excellent example of why the federal government should not be overly-involved in healthcare.  There are 300 million people in the US; offering just one system for such a large, diverse nation is simply a call for  chaos.

Moreover, the main problem with the Affordable Care Act concerns an element in its name — affordability.  Jessica Sanford, a single mother from Washington state, wrote to the President in October, thanking him for giving her afforable health insurance; consequently, Obama shared her story with the nation as model for other Americans and a mesage to his critics.  However, several days later, Sanford realized her tax credits had been taken away completely.  If Obamacare cannot deliver affordable healthcare to women like Jessica, is it really upholding its claim of affordability?