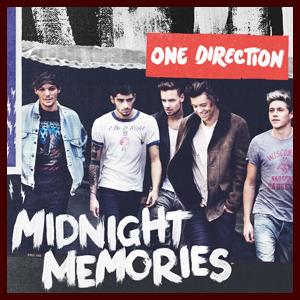 One Direction's new album was released on November 25.

When people think of boy bands, their minds immediately picture hordes of screaming tween girls, repetitive bubblegum pop overridden with auto-tune, and the faces of well-groomed, nonthreatening teen boys plastered all over the walls of girls’ rooms across the nation. Until recently, British-Irish boy band One Direction has perfectly fit this image. The band’s first two albums, Up All Night and Take Me Home, captured the hearts of girls globally with cliched lyrics about unrequited love and catchy pop beats that lacked originality. However, their new album Midnight Memories shows that the often criticized boy band can break out of its pop shell and show a whole new dynamic side to the hackneyed image of a boy band.

The boys of One Direction haven’t just developed their sound; they did a complete 180 for Midnight Memories. The days of choruses and bridges filled with nonsensical “na na na”’s are surely gone for the boy band now, as the album seems to be largely influenced by 80’s rock. Songs such as “Midnight Memories” and “Alive” give off a dangerous rock vibe, in sharp contrast from any songs in the previous two albums. They’re not exactly the new Nirvana, but the album is a distinct improvement from their previous sound. The album also seems to be folk influenced, with songs like “Story of My Life” and “Happily” giving off a distinct pop-folk impression similar to that of Mumford & Sons.

The new album isn’t completely rock, however; there is a good amount of slower songs that shows a distinct enhancement in lyrical quality. The lyrical improvement could be attributed to the fact that the majority of the songs on the album were written by band members Liam Payne and Louis Tomlinson, rather having the songs written for them. Midnight Memories’ second single, “Story of My Life,” shows off the more meaningful lyrics that are displayed throughout the rest of the album in songs such as “You & I” and “Don’t Forget Where You Belong.”

Although the boys of One Direction have switched bow ties and blazers for t-shirts and ripped jeans, they haven’t exactly captured a complete ¨badass” image. In order to ensure their squeaky-clean reputation and young fan base, curse words have been replaced with ¨shhh¨s in songs, despite the less-than-innocent innuendos scattered throughout. A few of their songs are less than extraordinary as well, such as “Does He Know?,” which is a complete rip-off of Rick Springfield’s ¨Jessie’s Girl.” The tenth track, entitled “Little Black Dress,” could have had the great potential of being another surprisingly rock inspired addition to the album, but is ruined by repetitious and unimpressive lyrics.

Although Midnight Memories certainly has its faults, the album is a surprisingly well-produced third album for the boys of One Direction. The rock vibe of the album may cause a decrease in the younger pre-teen audience, but it also may also open the boy band to a larger demographic of fans who enjoy the music rather than the band members’ pretty faces. Hopefully Zayn, Liam, Niall,  Louis, and Harry will continue to improve and develop their sound in any upcoming albums in order to make them more than just a cliched boy band.