50th Anniversary of JFK’s Life, or of His Assassination? 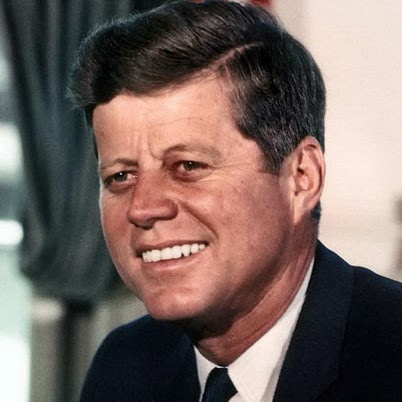 JFK should have been remembered for his life, not his death.

This November, 2013 was the month devoted to commemorate John F. Kennedy’s assassination. As many reflected upon the tragedy, one question became evident:  did we really remember JFK for his assassination, or for his life?

The President was fatally shot by Lee Harvey Oswald on Friday, November 22, 1963 while traveling with his family in a presidential motorcade through Dallas, Texas.  Although this tragedy shocked the world, his life should be more appreciated than his death, for who wants to be remembered for how they died instead of how they lived his or her life?

So in November, JFK deserved to be remembered for how he lived.  His accomplishments as a war veteran should be acknowlegded.  He was a commander of Motor Torpedo Boats during World War II.  His accomplishments as the 35th President of the United States should be highlighted—including his intelligent input into the foreign policy previous to the emerging Cold War, his domestic policy, and his positive impact on US economy.  In JFK’s presidency, he created an impressive, amicable foreign policy that allowed the US to help West Berlin during the Cold War. Also, JFK established the Peace Corps—a program that allows Americans to help underdeveloped countries in education, farming, health-care, and construction. Additionally, JFK teamed with Khrushchev, leader of the Soviet Union during part of the Cold war, and agreed to negotiate a nuclear test ban treaty that settled some tension among countries post World War II. Besides JFK’s impeccable foreign achievements, he created a domestic policy that highlighted there should be no racial discrimination in the US.  JFK continued on to end a period of tight fiscal policies and loosen monetary policies, which in turn kept interest rates low and encouraged economic growth. These vastly positive changes during his presidency are just a few of the accomplishments of the 35th President of the US. Yet despite JFK’s lifetime as a benefactor, this November his assassination was remembered—his being shot by a sniper is remembered and not a lifetime of achievements.

During this time, numerous cities in each state held parades, ceremonies, and gatherings to commemorate the 50th anniversary of JFK’s death. But should it truly be referred to as an ‘anniversary’? Individuals all around the nation celebrated. They reflected upon his assassination. They commemorated JFK for his death, not his life, nor his achievements during his life. On the day that marked 50 years since his death, CBS News rebroadcasted a live, three hour coverage of his assassination. Instead of showing the numerous accomplishments of JFK, his death was aired all day in broadcasts, documentaries, and reenactments.

But it is not just JFK’s remembrance that is celebrated for all the wrong reasons. Similarly, the anniversary of Martin Luther King Jr.’s “I Have a Dream…” speech was remembered this past summer, but MLK himself was remembered for all the wrong reasons. In Washington, D.C. during the month of August, Barack Obama made a speech at the Lincoln Memorial—the same location MLK made his 50 years ago—while thousands of Americans marched on Washington in commemoration of MLK.  MLK should not be remembered for his tragic death, nor should his speech be celebrated because he died. Rather, MLK’s “I Have a Dream..” speech should be remembered because of his life, and should be supported by his achievements during his life.

Additionally, almost a year ago on December 14, 2012, the Sandy Hook Elementary School shooting took place, killing 28 total individuals, mainly innocent children. As time has passed, thos question still comes up:  will the individuals killed in the tragic shooting be commemorated for their lives on December 14? Although this date is carved into history as a tragic day, in which many innocent lives were lost, should the date of their deaths be the day they are remembered for? Should not those individual’s birthdays be the date when they are commemorated for their lives? The unfortunate reality is that the lives of the children and administration that were unfairly killed on December 14 will forever be remembered by the public solely for death instead of the lives they led previous to their murders, and there are many things wrong with that societal reality. Society will remember these individuals for all the wrong reasons—their deaths.  Therefore, the remembrance of the Sandy Hook Massacre clearly demonstrates society’s ignorance of life, and rather its fascination with individuals’ deaths.

Individuals across the globe should remember JFK for his life and his contributions to the United States of America. While this past November was the 50th year since his death in 1963, people should have used the risen popularity of JFK as a chance to commemorate his considerable accomplishments as an individual that positively led the nation away from the turmoil post World War II. Instead of remembering lost individuals for how they died, we must remember the individuals, and we must reflect upon the way in which they lived their lives.