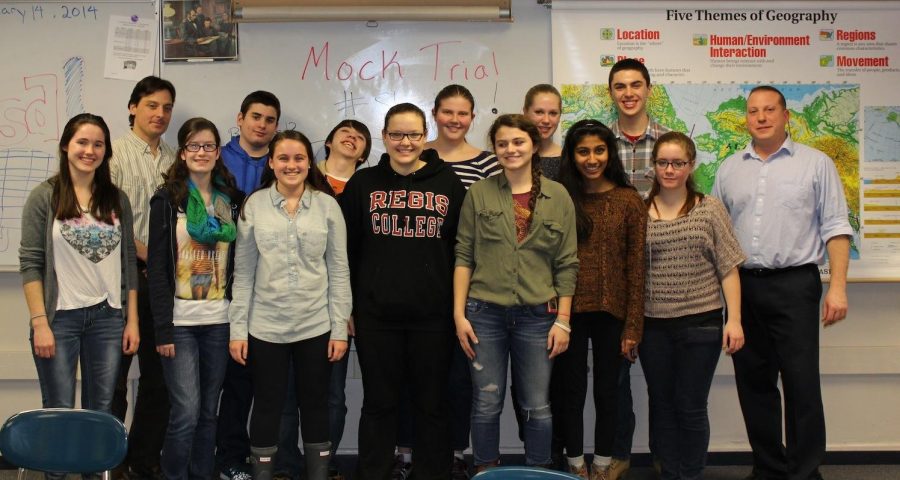 The Mock Trial clubs poses for a picture.

Five years ago, the Mock Trial Club ceased to be a team due to a combination of cuts to the extracurricular budget and a lack of student interest.

That was five years ago though — back when the school budget  had to be constantly cut, back when juniors Lexi Fasanello and Casey Culhane were  still in middle school.

This year, however, these passionately interested juniors have spearheaded a reboot of the Mock Trial Club with the help of the 2012 override and that of two history teachers — Phillip Balkus and Christopher Jean — and a lawyer, Mrs. Julie Corcoran.

Fasanello and Culhane decided at the beginning of the year to try and restart the program in order to provide a new club to students who have an interest in law.

Fasanello said, “The process was much easier than we expected, and Casey and I truthfully did not think this many people would join or that [the group] would receive the necessary funding.”

Fasanello and Culhane had to talk to Assistant Principal William Hahn and see if they could find an interested faculty member to help advise the group. Fortunately, they found two teachers, twelve students, and even a lawyer—all determined to bring back the program.

Mr. Balkus said, “Fasanello and Culhane ambitiously did all of the necessary work to set up the team.  They recruited members and filled out the application.”

At that time, its main purpose was to provide students with the necessary experience that being in a real trial requires.

So far the re-emergence of a once popular activity has been very successful, and the biggest difference this year than in the previous years is that one of the group advisors, Mrs. Corcoran, is a lawyer. With this expert help, Mock Trial Club members are receiving lots of practical help in constructing believable, substantiated cases.

Advised by Mr. Balkus and Mr. Jean, Mock Trial Club is comprised of a core of twelve students—many who are students in Balkus’ AP US History class.  Each week on Tuesdays and Thursdays, the team gets together to work on a case they received from the Massachusetts Bar Association. The Massachusetts Bar Association puts all of the competitions together and organizes the program.

This year’s case is a civil law suit against an airplane company being sued for the death of a stunt pilot. On Tuesdays and Thursdays, the team works on all of the elements that will go into the trial such as direct examinations, cross-examinations, opening statements, closing statements, and overall strategy.

The group’s first competition was January 24, at Attleboro District Court  2PM  against Foxboro High School. Walpole came out on top and beat Foxboro  83-81. Next, the team had a  competition January 27, at Stoughton District Court against Dover-Sherborn High School and won again with a score of 91-90.  The group argued the Plaintiff side in the first trial and the Defense side in the other two.

Although they lost, the revived club has certainly captured student interest. The 15 juniors will have another opportunity next year to move further with their next case.