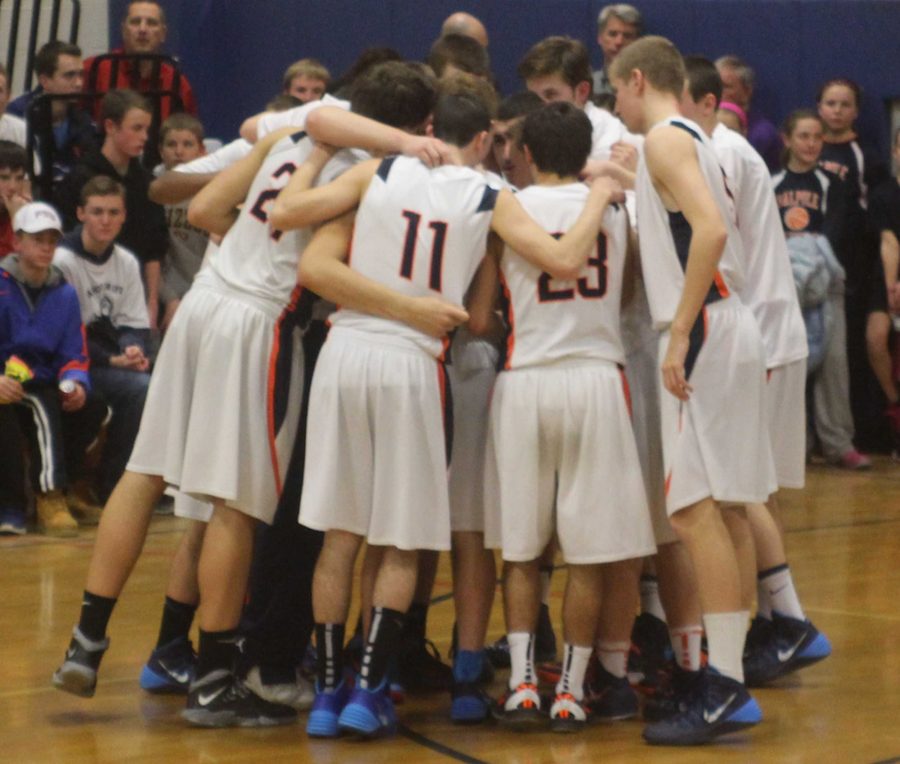 The Rebels come together for their pre-game huddle.

In front of a crowd that packed every inch of the Walpole High gymnasium, the Rebels lost sight of something they have been striving for all season: a Herget Division title. The Wellesley Red Raiders used strong defense and a fast-paced offense to turn a five-point halftime lead into a convincing 69-56 win; and heading into the final stretch of the season, the Rebels must re-focus and aspire for better play in the postseason.

“We just couldn’t score and combat their up-tempo offense,” said senior Captain Adam Quinlan, who was a monster in the paint in the first half with 11 points and eight rebounds but only scored two points in the second. “We gave them a lot of open shots and they hit them all; we have some work to do on the defensive end.”

Wellesley led for the entire game, except for a brief moment near the end of the first quarter. Despite trailing throughout, the boys kept the game close early. Quinlan’s calming presence down-low neutralized much of Wellesley’s up-tempo offense early on. The Rebels finished the first half on an 8-2 run to close the gap to 32-27 and bring the section back into it.

However, in the second half, the Red Raiders were able to offset Walpole’s momentum and open the lead to as much as 20. Wellesley held the Rebels to 35 percent shooting (20 of 58) and much of that can contributed to the Raiders defense on senior point guard Ryan Fogarty, who was dominant in the first meeting in which the Rebels won 63-59. This time, Fogarty scored 21 points, but he was held to only 8-of-22 from the field.

“Our press usually leads into our defense, but us missing a lot of shots let them set up and execute well,” said Coach Dave St. Martin after the game on Tuesday February 4. “Wellesley played very well tonight and I give them a lot of credit. For us, we try to create a lot of havoc on defense and tonight we just didn’t get after it.”

Wellesley’s second half success can mostly be attributed to their depth off the bench. The Red Raiders utilized 10 players for much of the way before emptying the bench in the final minutes. The fresher legs led to the Raiders coming away with the majority of loose balls and rebounds.

Led by Ryan Noel and Malik Rochelle, Wellesley out-rebounded Walpole by 11 and seemed to command the glass at will in the second half. Rochelle was tasked with guarding Quinlan, who was shutdown in the final 16 minutes of the contest.

“Wellesley’s tenacious defense was really the difference in this game”, said Quinlan. “Coming in hot with some big wins against Natick and Dedham, we really thought we could take this game. If we want to have some success in the tournament, we need to play a lot better.”

Despite the loss, the Walpole community had a joyous night: the Rebels basketball program raised $15,000 for the Tommy Quinn Foundation. Special t-shirts were worn by fans, coaches, and players from both sides, so it was a great night to remember the freshman student.

St. Martin said, “It was a class act by Wellesley; they purchased shirts and donated some money and wore them. I have so much respect for Wellesley Coach Magpiong. I thought it was a great night. We haven’t had an atmosphere like this in 10 years. Just too bad the outcome wasn’t a bit different.”

Now with the community behind them, the Rebels hope to turn it around down the stretch and make some noise in the State Tournament.