Variety of Romance Films to Hit Theaters This Valentine’s Day 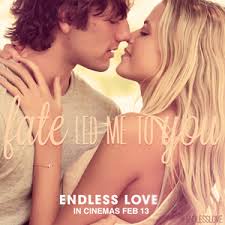 "Endless Love" is expected to be popular in theaters this Valentine's Day.

Though it may be desirable to fantasize about Nicholas Sparks-worthy love and lust on Valentine’s Day, the closest many people get to a perfect romance is through the television screen. Because Ally and Noah Notebook relationships are rare in reality, one can always rely on Hollywood to produce a plethora of sappy cinema couples to satiate their desire for drama and passion.  The film industry capitalizes on loneliness, for it draws many to theaters for sickly sweet, over-emotional performances every February.  This year is no different, as the lineup of films coming to theaters February 14 are sure to tug at viewers’ heartstrings.  Not only are there heartfelt, love-infused films coming to theaters this Valentine’s Day, but there are also movies that are expected to make viewers laugh rather than cry.

This year’s headlining “chick-flick,” properly titled Endless Love, chronicles a long-winded tale that everyone has heard before: underprivileged boy David Elliot (Alex Pettyfer) meets high-society girl Jade Butterfield (Gabriella Wilde), a lasting bond is formed, and one hackneyed, overly-sappy line later, the girl’s disapproving father attempts to break them apart.  Technically, this exact story has been done several times before, as the original 1981 version of Endless Love was adapted from Scott Spencer’s popular 1979 novel—-not to mention the countless productions with conspicuously similar themes (i.e. The Notebook, A Walk to Remember, etc).  Surely, the film will not win any awards based on originality; however, despite its trite concept, Endless Love is guaranteed to draw large audiences (predominantly composed of teenage girls) to theaters everywhere.

While Endless Love will easily satisfy many viewers’ longings for romance, a few unconventional love stories will be hitting the theaters February 14 as well.  Winter’s Tale—an adaptation of Mark Helprin’s 1983 novel of the same name—follows the romance of burglar Peter Lake (Colin Farrell) and Beverly Penn (Jessica Brown Findlay), a beautiful woman suffering from a fatal illness.  The dramatic film has a supernatural element; after Beverly dies,  Peter is transported from the 1910 New York setting to a late 20th century version of the city where his memory wiped clean.  Over time, he begins to recollect his past as he realizes that Beverly has been protecting and watching over him all along.  Though the fantasy-laden trailer is confusing and difficult to follow, the film’s star-studded cast—including Russell Crowe and Will Smith—in addition to the movie’s unique premise seems promising.

For many movie lovers, Valentine’s Day would not be complete without a classy rom-com.  A modernized version of a classic 1986 romantic comedy, About Last Night—starring Kevin Hart, Michael Ealy, Regina Hall, and Joy Bryant—is a humorous take on dating and relationships from a young adult perspective.  The plot focuses on two pairs of roommates—Bernie (Hart) and Danny (Ealy), and Joan (Hall) and Debbie (Bryant)—who form two couples within the group. The friends give each other dating advice throughout the film, and the disparities between the opposite sexes provide a humorous look at stereotypical male versus female perspectives.  About Last Night is a fun, realistic take on relationships as opposed to the cliched, over-dramatized “love at first sight” stories often associated with the holiday.

Of course, there are always options for those who want to reject the Valentine’s Day sappiness completely. The new comedy Date and Switch is devoid of romance, despite its initially misleading premise.  Best friends Michael (Nicholas Braun) and Matty (Hunter Cope) embark on a quest to lose their virginity before senior prom, but they find their plans briefly interrupted when Matty reveals that he is gay.  Though initially surprised, Michael accepts his friend’s sexuality, assuring him that he will not go on his “gay journey” alone.  For those looking to enjoy a less romantic and more “bromantic” movie this Valentine’s Day, Date and Switch is a perfect choice.

Valentine’s Day weekend is bound to be noteworthy in the box office, regardless of the hype– or lack thereof– surrounding the films.  Going to the movies on a date or with a friend is always a viable option; fortunately, the variety of films to choose from this year caters to multiple tastes.