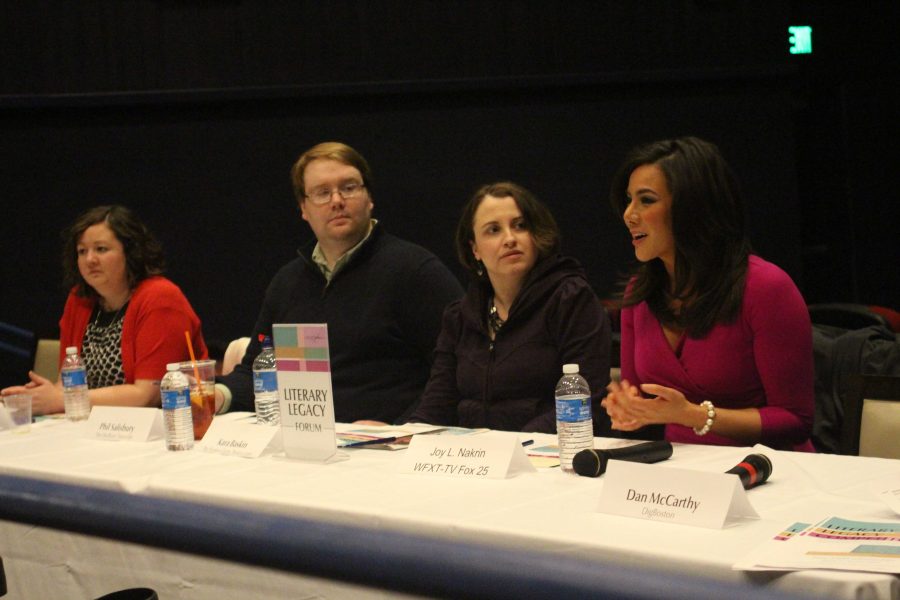 Thirteen Rebellion journalists from the Walpole High Rebellion attended a panel discussion on Thursday, February 27, at Legacy Place in Dedham, Massachusetts. In promotion of the $500 scholarship competition from the Literary Legacy Foundation, several professional journalists gathered to speak to student attendees about their careers in the field.

During the event, Dan McCarthy, editor for Dig Boston, led the discussion asking the journalists about a series of topics ranging from their average day at work to advice for aspiring journalists. “This is basically a watershed time in the history of journalism as a medium of news and information dissemination,” said Mr. McCarthy acknowledging the major change to media journalism.

Joy Nakrin, a member of the FOX 25 news team, also attended the event and shared her experience as a journalist on television. ¨There’s this fear in television that we’re becoming irrelevant and that we could go extinct. So a lot of us wonder, will we have a job 10 years from now?¨ said Joy Nakrin.

With the majority of the discussion focused on online publications, the panel shared their thoughts on their experience with the change. When asked about the digital and social growth in the last decade, Ms. Nakrin said, “I find that more and more everyday we have responsibilities to produce content online.¨

The journalists then went on to discuss the effectiveness of using Twitter to communicate the news.  With the rise of social media as a news outlet, journalists only find it harder to spread accurate news in a timely manner.

Despite the newfound focus on social media, some of the journalists felt they rarely use it to find news and rather rely on the direct source to get reputable information.  Taryn Luna, a correspondent who joined The Boston Globe in 2013, said “I’m still primarily writing, so I don’t have as much as an opportunity to get into the digital strategies and the digital mediums as much as other journalists.”

The Literary Legacy scholarship is open to all juniors and seniors attending high school within a 10 mile radius of Legacy Place in Dedham, MA.  To enter, students must submit a well developed article on their assigned business in the area.  After approval, articles will be published on LegacyPlace.com where the author can promote and share their work.  On June 14, after a panel of judges review the articles, four winners will be announced

At the close of the discussion, the panel allowed questions from the attending students and teachers in the audience.  Journalism students from Walpole High enjoyed the discussion and felt that they benefited from it.  An Editor in Chief of the Rebellion, Hannah McLaughlin said, “Listening to those currently immersed in the field of journalism provided me with incredible insight into potential future occupations.”