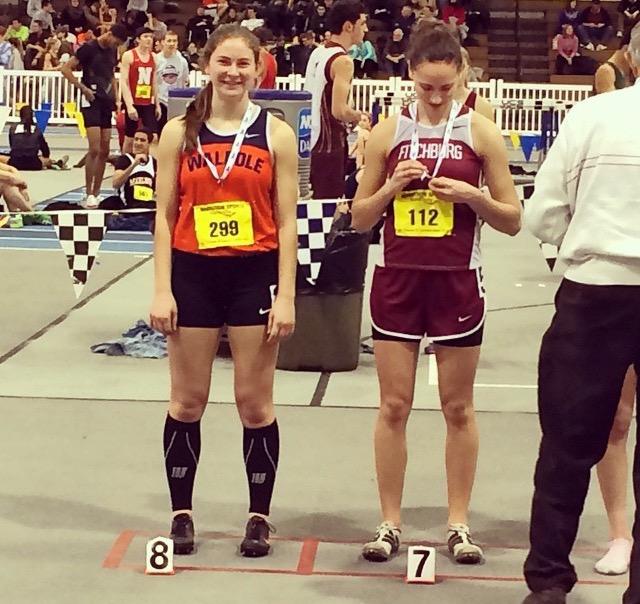 At the Indoor Track and Field Banquet on March 8, the Walpole coaching staff awarded junior Tori Lynch for Outstanding Field Athlete.  Qualifying for the Division III Championship Meet for three events (High Jump, 600m, and the 4x400m), she ended up only competing in the track events, but she won a medal in both: 8th Place in the 600m, and 7th Place in the 4x400m.  Whether her contributions were in the field or on the track, one thing is clear: Tori’s versatility was a significant asset for the Rebels this season.

Over the course of the the Rebels 4-2 season, Tori was the leading point scorer with 39.5 points. Her versatility in multiple events allows her to score an average of 6.33 points per dual meet.

Lynch started her track career as a freshman, and dedicated most of her time to hurdling. But since then, she has established herself has the best high jumper on the team, the best 400-meter-hurdler on the team, and one of the best mid-distance runners on the team.  A key component of the 4×400 relay team which now holds the current indoor and outdoor school records, she usually runs as the first leg.

“Tori also sets the tone for the 4×400 by placing the team in a good position to perform,” said Head Coach Conor Cashman.

At the start of this year, Lynch quit soccer and joined the cross country team. Originally, she made this decision as a way to prepare and train for the winter season, but over the course of the season, Lynch moved her way up from JV races and became a contributing varsity runner. Lynch’s decision to run instead of play soccer has definitely benefited her as she has shaved 2.4 seconds off of her 4×400 meter relay split time, from 63.9 seconds last spring, to 61.5 this winter.

“I have gained a lot of endurance from cross country” said Lynch. “This helped me improve my times a lot this season because I can keep fast speeds for longer.”

After her unexpected success in cross country, Lynch took on a leadership role for the group of mid-distance runners, and also the high jumpers going into this indoor season. She taught sophomore Lindsay Cordopatri and freshman Gabby Donahue how to high jump, as they tried it for the first time this season.

“During meets, Tori has a calming presence on the other high jumpers and helps them not only get their marks but also find success,” said Coach Cashman. “At practice though, she is one of the hardest workers on the team.  Every day, she is the last athlete in the weight room.  I couldn’t be more proud of her success this season.”

With the start of the spring season just around the corner, Lynch looks to improve her times and further her versatility. Lynch said, “My main goal for spring is to medal at Divisionals for the 400 meter hurdles and qualify for All-States.”