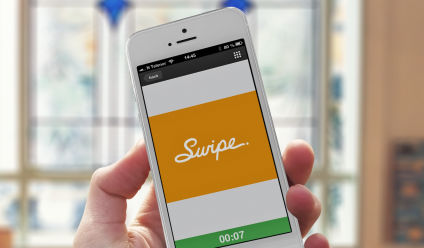 Swipe is the next big thing. Similar to Yik-Yak, this ‘anonymous’ app allows you to post your thoughts with pictures or videos. However, what some people are starting to learn the hard way is that you only see posts from the users that you follow. So, when you decide to follow Brad from math class who you ‘secretly’ drool over, don’t be surprised when all of his past posts appear and you see that your affections are actually not so secret…just creepy. The app is intended to be used to post pictures and you have to guess who took it, but it is more used for bullying, just how Yik-Yak was. The idea of being able to post something and thinking nobody will ever know for some reason makes people feel the need to express their “true” feelings.

The app asks users for access to their contacts which is how it conducts who you follow. You also have the option to look for your friends by typing in their username into the search engine. Your feed only is made up of the users that you follow and nobody else.

Users are offered the options of having your username be tagged with their posts or not, but it clearly is not that hard to figure out who is posting what. Another option within this app is to “reply” to another user’s swipe post; the only thing is you cannot respond anonymously. So when your ex-boyfriend’s new girlfriend posts a selfie, think twice before you reply to let her know that she looks and probably smells like your dog.

Even though I am sure that one would express their long list of insults and ‘comments’ to another’s face, Swipe is seen by most people as another outlet for bullying and not getting caught. The app received its name because, similar to the dating app called Tinder, you can “like” a picture by using your finger to simply swipe to the right. If you do not find the post worthy of your “like” then just swipe left and it removes the picture. Once you swipe either right or left past a post you are unable to view it again.

The sketchy part about this app is that not only does it persuade users to believe that all posts are anonymous but it also has a winky face as its logo. So, use this app with caution and I advise you all to just straight up not post anything risky on the app at all. The ability to be anonymous is a dangerous risk, so swipe carefully ;)