Mrs. Dent Steps Down From Position as Director after 10 Years at JMS 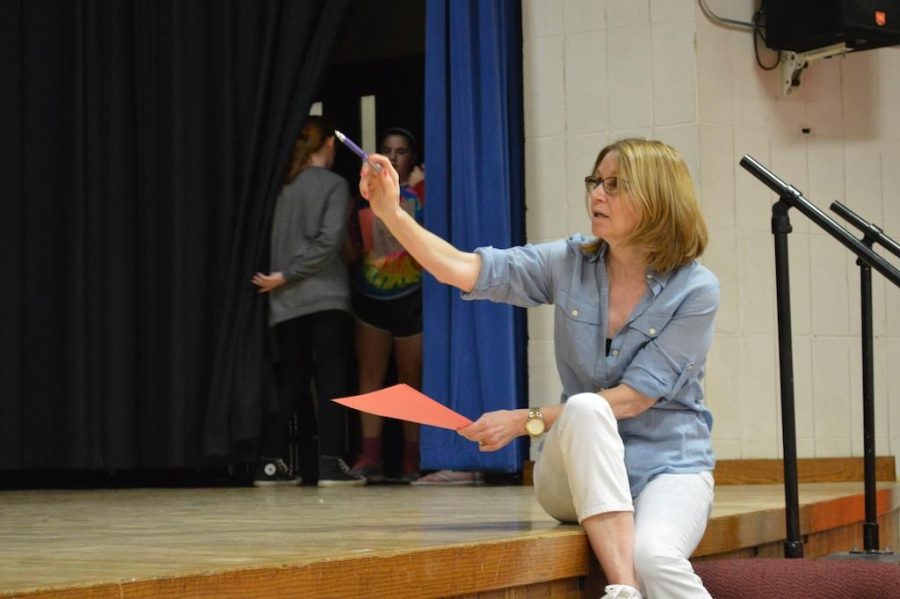 Mrs. Diana Dent directs a rehearsal for the "Spring Thing" on Friday, May 15.

The theater program at Johnson Middle School was not always like it is today.

All students had to work with was a dilapidated old stage, torn curtains, an antiquated sound system, and inadequate stage lights (which consisted of three garage lights on either side of the stage).  At that time, the auditorium at the Middle School was hardly ever used for any productions.

However, that all changed with one person: Mrs. Diana Dent.

Originally subbing in the school system, Mrs. Dent transformed the auditorium into the ever expanding arts center that it is now.  Now, after ten successful years directing both the plays and the talent shows at Johnson Middle School (JMS), Mrs. Dent, a seventh grade instructional aide as well as the orchestrator of the arts at JMS, is retiring from her position as director. The Spring Thing, the talent show at Johnson Middle School, took place on May 21, and was her last performance to direct.

Growing up, Mrs. Dent lived on a farm in Indiana and as a child, she was the only one in her family who was interested in theater. The initial appeal of theater began when she saw her first play in Indianapolis, Oliver, starring Davy Jones. From that moment on, Mrs. Dent knew that theater was the career she wished to pursue in her future.

After participating in drama throughout her high school career, she went on to major in theater at William Woods College in Fulton, Missouri. Following college, Mrs. Dent became a film and TV agent in both California and New York, and over the course of 12 years, helped multiple clients excel in their careers. Although Mrs. Dent enjoyed seeing her clients do well in the TV and film industries, she thought that working with students was much more rewarding. “It’s so wonderful to see kids discover a different part of themselves or discover something about themselves that they didn’t know that they could do,” said Mrs. Dent.

Mrs. Dent enjoyed seeing the participants of the drama club flourish and discover new opportunities. Also, she loved watching the plays progress from awkward read throughs to fluent and well executed productions. Ultimately, Mrs. Dent strived “to have a memorable evening at the theater, not just a pretty good middle school production.”

Not only has Mrs. Dent valued the drama program as a whole, but she has also appreciated the transformation of each individual student in her program. “I feel like they are all my own kids,” said Mrs. Dent. She loves to watch the students mature and advance in their high school careers, regardless of the paths they choose to take. She often followed her former students through high school and regularly attended their productions.

Mrs. Dent’s relationships with the students she mentored were some of the most important parts of her job. These ties were made strong starting in middle school when the students were able to get to know Mrs. Dent and become part of the family that is the drama club.

Margaret Wall, a seventh grade performer in Johnson Middle School’s talent show said, “She was always really nice and pleasant and she gave me compliments, which turned my bad days around.” Additionally, backstage manager, Jacquelyn Driscoll, said “She is just so open to my ideas and is really accepting.” Evidently, Mrs. Dent’s students admire her and benefit a great deal from their experiences with the drama club at Johnson Middle School. Mrs. Dent encourages more kids to join the drama club for various different reasons. Specifically, drama gives kids a chance to express themselves and become a part of something bigger than themselves.

“Drama is the ultimate team sport because you become a family and learn to work as a team,” said Mrs. Dent. She also emphasizes that even children with stage fright end up feeling totally comfortable on stage due to their constant rehearsing and encouraging cast members who create a relaxed environment on stage. Throughout her career, Mrs. Dent has seen many kids come into drama as normal middle schoolers; however, they have all left as mature performers.

With Mrs. Dent’s retirement as the director, English teacher Stephanie Feinberg will take over the position. Mrs. Dent has faith that the theater program will continue to flourish and she hopes that the program continues to grow.