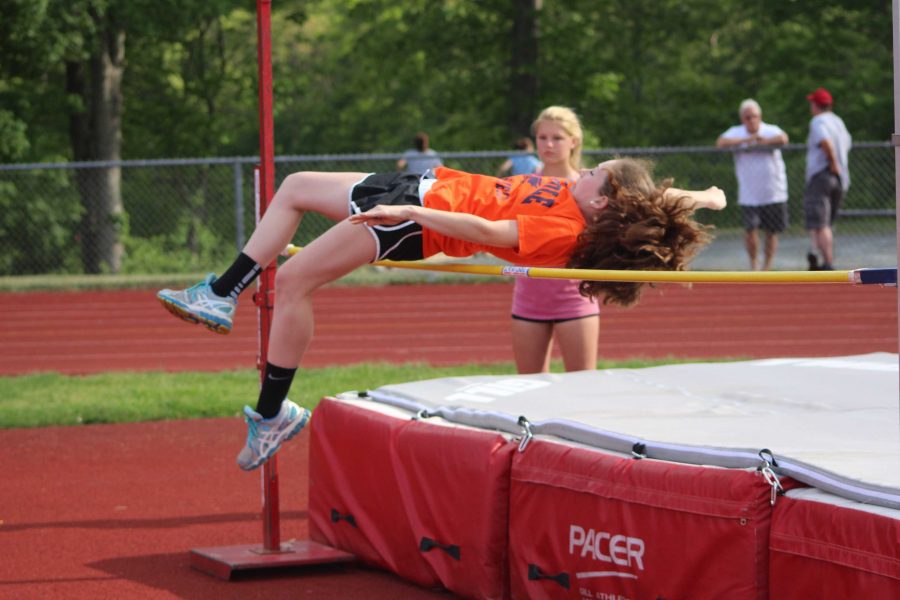 Seventh grader clears 3'10" in the high jump at a middle school track meet on May 29th.

By Delaney Murphy and Emily Martin

Walpole Middle School Track and Field began the fourth year of its seven week program on April 27. Coached by Fiona Murphy, Chris Lotsbom, and Antonietta O’Toole, the team had three meets at North Attleboro High School.  Each meet had at least five teams that ranged from North Attleboro to Saint Mary’s to King Philip Regional School.  In their final meet of the season on June 10, the boys placed third out of four teams while in the girls placed second out of four teams.

For the girls team, the point scoring came from a wide variety of athletes in many different events.

Eighth grader Abby Rae was the only Walpole athlete who took a 1st place with an 11’9” jump.  In the 100m hurdles, she showed her versatility by placing 3rd with a time of 17.60.

For the distance events, they proved to be very competitive.  In the mile, seventh grader Michaela O’Toole ran a 7:01.74 to place 2nd.  Seventh grader Ali Giffen ran a 7:07 to place 3rd, and eighth grader Leah Whearty placed 4th with a 7:37.

“I was not nervous. [The coaches] made me comfortable,” said Whearty.

A three year veteran of the program, seventh grader Tyler Sullivan placed 4th with a time of 6:13. Reflecting on his accomplishment and his past three years of competing for the middle school team, Sullivan said, “[The coaches] helped me go faster, try harder, and [taught me] not to give up.”

“I am glad that I started the middle school program so that Walpole kids can now learn about running from elementary school all the way through high school, without missing those 3 years in between,” said Coach Murphy.

For the first three weeks of the program, the athletes had the opportunity to experiment with different events. The events in the meet include track events that range from 50 to 1600 meter races (including hurdles), to field events such as turbo javelin, shot put, discus, long jump, high jump and a relay. Eventually, athletes specialized in certain events where they trained to compete at their meets.

With the season coming to a close,   Coach Murphy believes that the transition from middle school track to high school track will be much easier as a result of her program.

“I think they develop a confidence in the middle school program that allows them to give their best when they reach high school,” said Coach Murphy. “They have had the experience already, so they can focus on training, improving and enjoying being part of the team once they reach high school.”