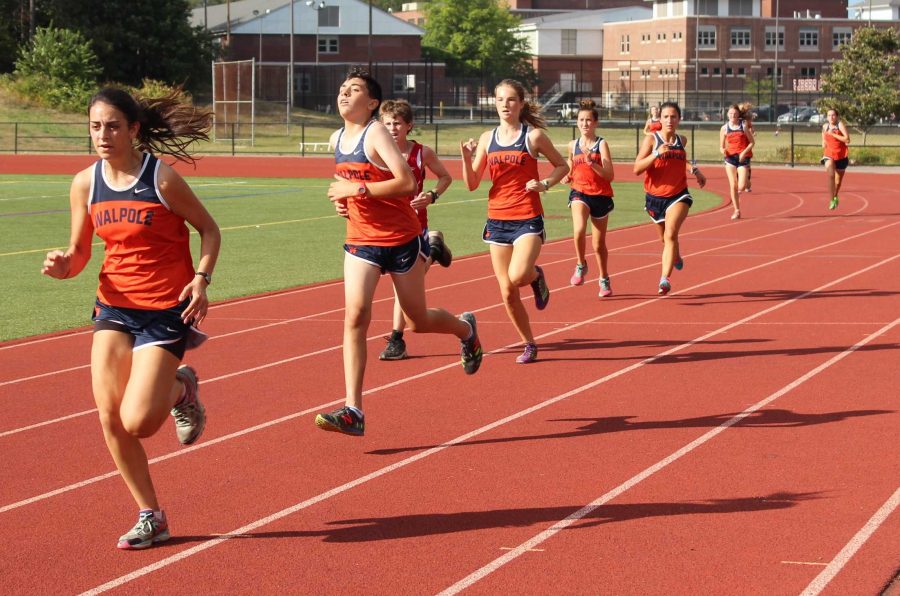 By David Moser and Delaney Murphy

Field Hockey (7-0) – Three straight wins last week and the Porkers do not look like they are slowing down anytime soon.  Walpole defeated Milton (5 -1), Dedham (4-0), and Franklin (2-0).  The Rebels take on Needham on Tuesday, September 29.

Girls Cross Country (5-0) – Girls Cross Country had their first invitational meet of the season last week.  The team competed in the Frank Kelley Invitational at the Wrentham Development Center on Saturday September 27. In addition to a strong showing from the Freshman Girls (with four medals), one varsity standout for Walpole was senior captain Alyssa Murphy, who finished in fifteenth overall in the varsity race, with a time of 19:56.

Golf (5-1) – With five straight wins, the Rebels show no signs of letting up.  Defeating Wellesley, Catholic Memorial, Weymouth, Milton, and Natick, Walpole is determined to keep adding tallies to the win column.  Walpole Golf takes on Dedham on Tuesday, September 29.

Boys Soccer (2-2-3) – With two wins in their last three games, the Rebels are right back on track to have a great season.  The boys handed a defeat to both Milton (3-1) and Catholic Memorial (4-0) on Monday, September 21, and on Saturday, September 26.

Football (2-1)- In a surprising defeat, Walpole Football lost to Milton, on Friday, September 25, by a score of 28-7.  Late in the first half, Rebels Quarterback Tyler Berkland suffered an upper body injury and sat out the rest of the game.  One positive highlight is senior running back Steve Cuqua maintained his point streak by scoring at least one touchdown in each of Walpole’s last three games.

Swimming and Diving (2-2) – The Rebels struggled to stay consistent, as the team cannot win more than a match in a row. Despite a loss to Marshfield on Friday, September 25 (96-91), sophomore Andrew Gubanov qualified for the 50 yard freestyle for states, which will take place mid-November.  Walpole Swimming and Diving takes on St. Peter Marian and Notre Dame on Tuesday, September 29.

Boys Cross Country (2-3) –  Boys Cross Country also participated in their first invitational meet of the season last week. Out of the seven runners in the varsity race, zero were able to bring home a medal. Adding to the boys disfortune, senior captain Andrew Wheeler, who was in medaling position and on pace to break his 5k personal record, fell and sprained his ankle. Unable to finish that race and now sidelined for the next two weeks, Wheeler and the rest of the team will have to fight through their struggles to improve their 2-3 record. The Rebels face Needham and Braintree on Wednesday, September 30.

Volleyball (2-5) – Walpole’s 3-1 loss to Westboro on Monday, September 28, pushes the team deeper into a hole as the season gets further underway.  Almost halfway through the twenty game season, the Rebels need to find their way soon if they want to make the tournament.