Heritage or Hate: Walpole’s Community Must Unite to Expel the Confederate Flag Association from the Rebel Name 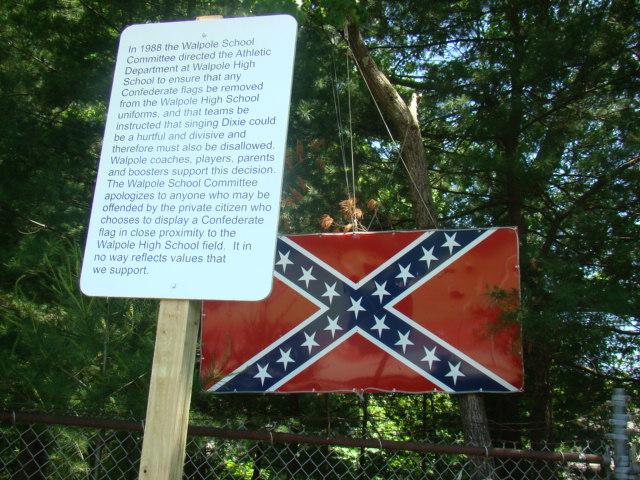 By the Editorial Board

On August 27, 2015, the Walpole School Committee unanimously voted to permanently fly a Walpole banner over the burning red Confederate flag that hangs by Turco Field. The banner, which hides the flag if one stands at a certain angle, was previously only raised during varsity games, WHS graduation, and other important events. It is wrong that we have gone on for so long without a permanent fixture over this racist and hurtful flag. Although the flag is on private property, the leaders in our town had a responsibility for years to find a solution and hide this monstrosity from community members and visitors. The owners of the property on which the flag flies have recently passed away, and future changes concerning the flag are unknown. The new permanent banner, called a “band-aid” by Stephanie Rodriguez-Wilkes at the August meeting, is definitely a step in the right direction. But just a step.

Also discussed at the meeting was our school name: the Rebels. We have been the Rebels since 1965. Although the name arrived before the Confederate imagery of the 1970s, there was an undeniable two decade period in which the word Rebels did represent Confederate soldiers. Some believe the name to be a source of school pride, while others see it as disrespectful and offensive. The Walpole School Committee decided that a “rebranding” of the word Rebels must take place to erase harmful Confederate connections to our name. The Walpole School Committee decided to now promote the Rebel as a person who is rebellious, but stands for positive change. The committee tasked Principal Stephen Imbusch with leading the Rebel Rebranding meetings. At these meetings, students, parents, administration, and community members face the challenge of erasing the Confederate flag from our town and its message from our name.

There are a few basic problems with the decision to rebrand rather than remove. First of all, we must acknowledge our past. We cannot simply cover up the racist undertones that our town had for years as if they never existed. Recognition of our mistakes is crucial to healing and earning back respect from other towns. Rebranding would keep intact the name that many look to as a source of pride; however, school pride is completely trumped by the concept of others being hurt, excluded, or angered by the name. The act of rebranding is a double edged sword: it is an attempt to fix our image, yet also a stubborn refusal to acknowledge all that we have done wrong.

That being said, due to the fact that we have had very little administrative action concerning the Rebels and the flag for a long time, this spur of change must be fostered as much as possible. Because the rebranding is the only option on the table right now, we should give it full support until it either fails or succeeds.

Although we are moving in the right direction by attempting change, an issue still remains: there are no strategies, no guidelines, no forms of measurement for the project. Rebranding the Rebel name is an unprecedented project. Who decides if the name has been successfully cleared of its hurtful connotation? Is there a time frame for this change to take place? If nothing changes with our town’s mindset and reputation, will more drastic steps be taken?

Perhaps the reason why these questions remain unanswered is because the Walpole School Committee feels the Rebel Rebranding attendees should be the ones to organize guidelines. After all, they are the ones who will be following them. But at the first meeting on September 22, the conversation barely touched upon rebranding, much less how to accurately judge a change. Discussions centered around the Confederate flag itself, and why or why not the Rebel name should change. While these are important topics, they are not relevant to the topic at hand. Such concerns should be brought up at School Committee meetings rather than meetings specifically for the rebranding action. At future meetings, discussions must stay on topic so that actual change can take place. If not, we are simply continuing to argue, thereby dragging on our history of not taking action. Having a rebranding effort that fails to get things done is as bad as doing nothing at all.

Requirements need to be set, a plan of action should be fleshed out, and the rebranding needs to be thoroughly supported. Walpolians need to step up and make positive change in order to wipe out what is blatantly wrong, because the future of the Rebel name lies with the community. We have been handed the opportunity to redeem ourselves and fix our reputation.

In 2015, we are in agreement that the Confederate flag is an unacceptable excuse for school pride. So please, if you love your town, remove any sign of the flag from your life. Take it off of your bedroom wall, or your license plate, or your social media profile picture. Do not buy flags to drape on your back or wave at football games. We are past that. You call yourself a Rebel? Let’s see you fight against the lingering bit of injustice that remains in our town, hidden under our name. Let’s see the Walpole community fight against a past definition that no longer represents who we are. Let’s see a fight for change, kindness, and respect, qualities of a true Rebel. If the effort fails, the removal of the name Rebels becomes a serious possibility.

Opinions from the Community

“As long as the community and the student body are behind distancing ourselves from the flag and everything it stands for, I think that we can hang on to the rebel name and move forward with it. If we can’t distance ourselves, I’m not opposed to looking at the next step, to get rid of the rebel name, but I would prefer not to.”

“I believe the Rebel name will be forever linked to the confederate flag regardless of the effort of rebranding. This is a place of education and I don’t believe that many students truly understand the underlying message this symbolizes.”

“Rebel is a person who stands up for what is right, but NEVER against what is right. I believe it is time for the Walpole community to seize the opportunity to change the future and not live in the past.”

“Although a resident has First Amendment rights, the school as a duty to foster a safe environment — not one promoting ignorance, racism, inequality, & bullying.”

“I don’t think there is anything wrong with the name Rebels. It is a word that can have a bunch of different meanings other than a confederate soldier. I think that the school nickname definitely is important to school pride and it is something that unifies us.”

“The Rebels play with respect, composure and a hard work ethic… I’ve never met a person in Walpole who because of the name, agrees with the true connotation it brings.”

“Recently I re-watched the YouTube clip from Mike Smith, who came to WHS last March.  And one of the questions he challenged students with was, ‘What do you want to be remembered for?’  Like Mike Smith, I believe in the power that you students have to make Walpole High an even better place, by preserving the good and rejecting racism.”

-Nancy Gallivan, Head of Walpole School Committee (in an email to those interested in the Rebel Rebranding meetings)

“I think that if people are voicing their discomfort with the name, that is reason enough: we should change the name purely out of compassion towards them…Tradition can be important, but its importance becomes trivial when weighed against the feelings of a large subset of our community.”

“A rebranding is definitely a good idea and very innovative, but I think they need a lot of participation from students and from the community.”

“As an African American and a captain on the football team, people must wonder how I feel about this. I feel that an image can mean anything, it all depends how the people put it and describe that image. I was able to understand the image of this flag in Walpole and I learn what it is to be a Rebel.”